You are at:Home»Featured»NCDGC readies for 2013 National Championship 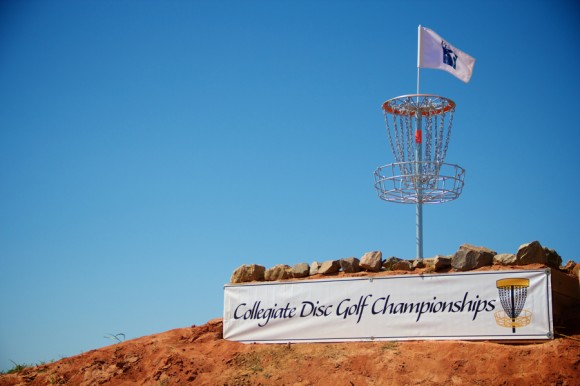 As the PDGA touring pros continue their march on the PDGA National Tour series, another set of disc golfers are preparing for their biggest tournament of the year: the National Collegiate Disc Golf Championship (NCDGC). Each year, collegiate disc golfers converge on the Hippodrome in North Augusta, South Carolina for a weekend of disc golf and other fun events. The 2013 NCDGC gets started this Wednesday April 3 and runs through the weekend.

As teams hit the road to the Hippodrome for this year’s tournament, we talked with Alan Kane, NCDGC General Manager, for a full preview of this year’s event.

All Things Disc Golf: For those unfamiliar with the NCDGC, can you give us a brief history and describe the event?

Alan Kane: The NCDGC is the National Championship crowning event for collegiate disc golf. It is a team event with teams consisting of 4 players. On the school side, the majority of teams are Club sports. Several are included in the intramural programs, and a few are sanctioned through their athletic departments.

Everything started after the 2006 PDGA Professional World Championships were hosted in Augusta. After the event, Pete May wanted to create a new top level event that could be hosted at the Hippodrome every year. He had the thought of colleges playing disc golf bouncing around in his head for awhile. The light bulb lit up and he put those together and in 2007, the first NCDGC hosted six teams. That was no easy task. He had to find schools that had disc golf players, get them organized and coordinate getting them to the event. Through a few connections he had with people around the country, he was able to get the teams needed for the tournament. Once the players were there and had the great experience, collegiate disc golf just began to sprawl.

The event went from the 6 teams in 2007 to the 63 teams we have registered for 2013. The growth spawned the need for qualifiers and in 2010, the NCDGC began awarding spots to other events through out the year. Now there is a somewhat formal schedule that is divided up amongst 6 designated regions. Each Region gets a Premier Qualifier which gets two bids. Then, more bids are awarded to events in regions based on the number of active teams in each region. For example, the Southeast has the most active teams, so that region had three qualifiers along with their Premier event, where, the Northwest only hosted the Premier. You can find more information about this in this article.

For this year, teams qualified by finishing 1-16 at the 2012 NCDGC, winning bids at the Qualifier events, receiving the Honorary Pete May Invitation, winning the points ranking bid, or can still win a spot at our National Qualifier Playoffs, kind of like the play-in round of the NCAA basketball tournament.

All Things Disc Golf: You have the team tournament and the individual tournament, but what other events are going on during the NCDGC?

Alan Kane: We also have the GUTS collegiate championship, a Pro Clinic sponsored by the PDGA, Hott Shott putting championships, and distance competition.

All Things Disc Golf: We must talk about the location of the event… the Hippodrome! What is the Hippodrome and how did it get it’s name?

Alan Kane: The Hippodrome is a multi-use complex. On part of the property is a horse event facility with an indoor arena, outdoor covered arena and over 300 stalls. This was and still is the main use of the property. Hippodrome is by definition a name for arenas for horse events. The horse complex uses about 1/4 of the property. Throughout the rest we have the four courses spread in open grass meadows, pine tree forests, and hardwood woodlands. The courses are designed to challenge and bring the best out of advanced level disc golfers. Each of the courses has a very unique personality, which is kind of strange for them being right next to each other. Old Glory and Hogback are on the part of the property where the one course layout for the 2006 Pro Worlds course was. Old Glory is the feature course of the property and has three tee pads on each hole, suitable for beginner to pro level players.

All Things Disc Golf: There is the National Championship tournament going on and the First Flight. What is the difference between the two?

All Things Disc Golf:  New this year is the requirement of a PDGA membership. How has the PDGA helped the NCDGC?

Alan Kane: The PDGA has always helped support the NCDGC with staff and sponsorship. The NCDGC has utilized the infrastructure, assets, and reach of the PDGA to help our growth and event. The PDGA offers great help for all PDGA events and really helps our qualifiers with their events. As is the case for all PDGA events, they bring an immediate credibility to the event because of their standards of competition. The partnership with the PDGA has been extremely helpful and by continuing our relationship, the NCDGC will be able to continue leverage all of the assets the PDGA has to aid collegiate disc golf. The tournament is now billed as one of the 10 Major events the PDGA recognizes every year.

All Things Disc Golf: If fans want to come out, what can they expect to see?

Alan Kane: One of the great things we see at the event is the camaraderie and pride of the players. These competitors are competing for their institutions and their teammates. Disc golf is innately an individual sport, but when played as a team, the feeling of accountability grows. Teams come dressed in uniform, showing off their school pride aim to give their best for their team. Saturday we feature a Final 13 for the individuals, which not only crown the Men’s and Women’s Medalist, but is also how we award our All-American teams. The top 10 men earn 1st team honors, 11-20 get the 2nd team. The top 3 women earn 1st team honors. As the women’s field grows we will expand to more on that team and then to a 2nd All-American team, too.

All Things Disc Golf: Who makes it possible to run such a big event like the NCDGC?

Alan Kane: First of all, the players themselves. There is no event without the willingness of the teams to compete. Especially the team captains and presidents and officers of their clubs. They spend countless hours all year long to recruit new players, coordinate trips to qualifiers and the NCDGC, fundraise to be able to make all those trips, order uniforms, organize practice sessions, and a whole lot more.

Then, we have William Morris III. Mr. Morris is the owner of the property and the company Pete and I work for. He is a wonderful person and loves seeing the joy on the players faces as they compete in this grand event. He loves bringing all these players to the city of Augusta, which he loves dearly, and welcoming them with true southern hospitality.

Also, Innova Disc Golf has been with us since the beginning, willing to do almost anything to help the event. They are presenting sponsors of both the Old Glory course and the Hogback course. It’s great to to have help from such a wonderful company that gives so much back to the disc golf community.

DGA has really helped as we’ve hit our stride the past few years, too. They are the presenting sponsor of the Headrick Hills course, aptly named for the sport’s founder, “Steady” Ed Headrick. DGA has also launched an easy-to-use fundraising program for the schools to use to help get the funds they need throughout the year. The program also awards scholarships to those teams based on a points scale for how much fundraising they do.

The Hippodrome staff does wonders get and keep the courses and facilities ready. The manager, Tim Peterson, and Doug Williams love working hard to see this event at its best. There are countless other individuals ranging from students to presidents of universities, volunteers and staff to many other sponsors.

Thanks to Kane and everyone at the NCDGC for all the preview of the event. The top five teams heading into this year’s tournament are:

We are also excited to announce that we’ll have the California State University-Monterey Bay disc golf team providing guest blogs all week. They’ll give us a first hand account of NCDGC action. We’ll have more about the CSUMB team later this week.

Good luck to everyone at the 2013 NCDGC this week!