After releasing three drivers, MVP Disc Sports has slowed things down and put a new entry in their line of midranges. The MVP Tangent joins the Vector and Axis in MVP’s lineup of midrange discs. The Tangent’s low profile and slightly slower speed result in a very controllable, slightly understable disc that should produce great results for disc golfers at many levels.

MVP describes the Tangent as a slightly understable midrange driver.

Low power throwers will find this disc to be great for easy neutral lines and effortless glide. The Tangent features a smooth profile that offers a sleek modern feel, and will fit your hand like a glove.

When you first pick up the Tangent, you will notice the very low profile the disc has. It brings a nice flat top with a very slight dome. The rim’s height is smaller than the Volt or Axis. The Tangent felt very comfortable to us right away. It felt like a disc that you could easily control and would come out of the hand smoothly. It features a nice rounded nose and a small bead on the bottom.

For us, the Tangent was slightly slower than the Vector or Axis in our tests and slightly faster than our putters we were using. We would give the Tangent a speed rating of a four. We weren’t quite getting the Tangent as far as our other mids, but we were able to throw the Tangent very accurately.

The Tangent does not have a tremendous amount of glide which allows it to be very accurate. During our tests, we never saw the Tangent glide further than we expected and made for very trustworthy shots.

While the Tangent does have some turn, and we’d say it would slot in at a -2 on Innova’s scale, it isn’t “flippy” by any means. It is a very controllable turn. We tossed it into a headwind a few times and saw predictable results. It would turn a little quicker, but never flip over and lose control.

The Tangent does have a little fade but it is a very forward fade. Don’t expect the Tangent to fight hard to the left or produce any big skips. The Tangent will either hold a slight anyhzer line and finish flat or finish slightly to the left when released flat or with a little hyzer.

Where the Tangent really shined for us was on approach shots. At times, you are faced with a shot a that could be reached with a putter shot, yet a little too short for a full midrange shot. If you have trouble getting a smooth release out of a putter on an approach shot, the Tangent’s low profile should be a welcome feature.

We were able to take a little off our power and saw the Tangent fly very straight lines and settle down nicely with very little fade. If needed, you can put this on a nice little anhyzer and the Tangent would finish nicely on the line you were wanting. 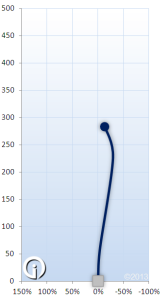 The MVP Tangent’s flight chart from inbounds Disc Golf is included to the right. You can see the slight turn at the start of the flight and slight fade at the end. For us, the turn came a little later in the flight.

On Innova’s flight scale, we’d put the MVP Tangent at 4, 4, -2, 1. It is a very controllable midrange disc that both faster and slower arms should love. For us, it might not be a first choice off the tee, but it will fill a void for a nice utility disc.

For example, an overstable midrange like the Gator or Drone might come in handy for windy shots or something where you need a little skip at the end. The Tangent fills the gap for the opposite side. You can lay this out on a very nice straight line, work it on a little anhyzer, or even a slight sweeping hyzer shot.

The MVP Tangent slots in slightly faster than a putter and slightly slower than other midranges like the Vector, Axis, Roc, or Buzzz. With great control, little glide, and little fade, the Tangent should be a nice point-and-shoot style disc for disc golfers of any level. 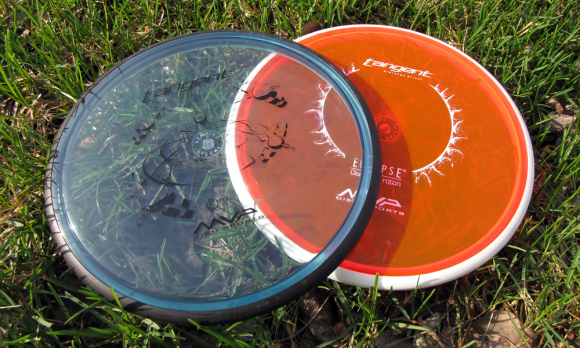 April 29, 2013 Update: MVP is releasing the Tangent in both Proton and Eclipse Proton plastic in just a few days and we got our hands on a few to test. In short, these things are money! Both the Proton and Eclipse Proton Tangents have slightly more dome than its Neutron cousin. This added dome bumps the glide up just a little bit and allows the Tangent to really hit a nice understable flight.

For us, the Eclipse Proton Tangents were our favorite in our tests. The turn was smooth and subtle and allowed the Tangent to hold a very nice left to right line similar to the one shown in the inbounds Disc Golf flight chart above. When given a little hyzer or slowed down a little, the Tangent continued to show very nice straight lines. Compared to the Neutron version, the Proton and Eclipse Proton Tangents were giving us a little more distance thanks to the added glide.