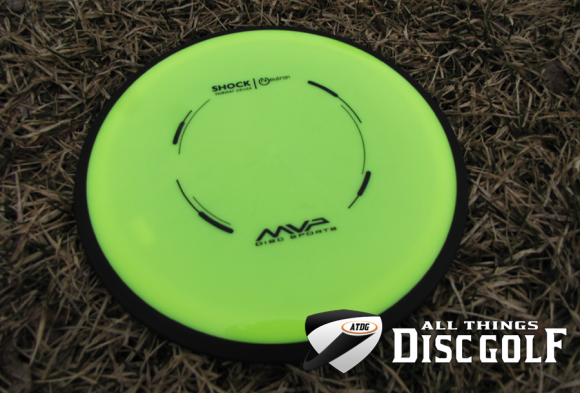 Late in 2012, MVP Disc Sports came out with their first two fairway drivers: the Volt and Amp. MVP has now added a third disc to that fairway lineup with the MVP Shock.

MVP describes the Shock as their slightly overstable fairway driver:

The Shock is a more stable compliment to the Volt. With a high power throw, it will hold a long straight line with less turn and immense glide followed by a late dependable fade.

The Shocks we tested initially showed turn similar to the Volt with a harder fade at the end. These shocks were not as overstable as we expected. After listening to initial feedback from testers, MVP decided to change how they process the Shocks to make them fly as initially intended.

“We received a lot of feedback about the Shock not being quite as stable as what people were expecting it to be. Because of this feedback, we investigated this and worked to adjust our process to make the Shock a little more stable so it would better complement our lineup of drivers,” said Brad Richardson of MVP Disc Sports.

Richardson continued, “In addition, the processing adjustments we made have actually improved the overall quality of the Shock, and will result in increased consistency in the future.”

MVP is also taking a very strong step to make sure customers are happy.

Richardson says, “We are currently offering to return Shocks for anyone that received a Shock that was not quite as stable as they were expecting it to be. However, we are not recalling any of them from the retailers. We have already taken much action to ensure that retailers will get stocked quickly with the new run of Shocks, including rejecting a substantial amount of inventory of first run Shocks. In the meanwhile, people have the option to return their first run shock for limited time up to March 18 (30 days after we announced our adjustments). Many retailers will be restocked with the new run of Shocks much sooner than that time period.”

If you are interested in exchanging a previous Shock purchase, use MVP’s contact form to get in touch with the company.

After receiving the new run of Shocks, we headed back out to the course to see how the new run performed. On our first throw, we noticed a lot more stability when compared to our previous tests.

This was quite the relief. This was already feeling like the disc we expected the first time. The Shock really does hold the line you put it on and remain stable at high speeds. The vast majority of our test throws flew with a turn rating of 0. It would hold the line and remain there.

On a few throws, we noticed the slightest amount of turn. Although, this could be chalked up to a flaw in form, the gyro technology, or a little added speed from a headwind. At the very most, we’d put the Shock at a -0.25 turn rating and that might only be seen from very strong arms. If you throw a fairway driver less than 325 feet, you will likely not see any turn from the Shock.

The Shock’s fade was interesting (in a good way). As the Shock starts to lose speed, we noticed a very forward fade. It would start to track to the left, but still carry forward. It wasn’t until the very end of the flight when it would really cut left hard. If kept low, the Shock would also produce a noticeable skip at the end. At times, the skip reminded us of one from a first run MVP Vector.

The Shock wasn’t going quite as far as the Volt for us. The Shock not only can handle a strong throw, it likes the added power. The Shock’s distance was similar to a stable Innova Eagle or Banshee. Don’t confuse “similar” with being “identical” — the Shock is its own disc, nothing exactly like it on the market today.

When it comes to distance, the Shock was very predictable. We released a few test throws on a nice sweeping hyzer and were able to place it exactly where we were expecting it to land. Most of the distance from the Shock really came from the power of the throw. The Shock showed slightly less glide than the Volt in our tests. It seemed to have slightly less glide than a Teebird and slightly more than an Eagle.

We also believe you’ll be able to get the Shock to fight a decent headwind. The high speed stability of the Shock is noticeable and the fade is strong. On a few test throws into a minor headwind (5-10mph), we noticed the Shock hang up in the air comfortably and resist turn. The headwind did keep the Shock from fading too much to the left at the end of the throw.

As for flight ratings, we’d place the Shock with a speed rating of 8, glide of 4.5, turn of 0 (ever so slightly less for strong power arms), and a fade of 2.5 (slightly more for slightly weaker arms).

When we had others test out the Shock, they were all surprised with the stability of the new runs. They were happy to see they could really put some force behind a throw and see the Shock fly on the line they were putting it on.

While the initial batch of Shocks didn’t produce the results that MVP Disc Sports wanted, MVP did the right thing and listened to feedback in order to produce a disc they were wanting out on the market.

The more stable Shocks have a very nice flat top and are not afraid of a headwind. Once the weather warms up a bit in the Midwest, we’ll revisit the Shock and give it a test in warmer conditions and a stronger headwind.

If you normally throw discs around the Speed 7-9 rating around 300-325 feet, the Shock should produce similar results. It is very stable at high speeds and shows a true fade at the end of the flight.

Shocks are in stores now, if you’re looking to complete your MVP selection, pick one up today.

(Editors note: Our previous review of the Shock showed a much less stable disc than what was described above. Our previous flight ratings were 8, 4, -1.25, 2.5 on the Innova scale. The Shocks MVP are producing today should reflect our full review above. We will update this review with new data from Inbounds Disc Golf when it is available.)