You are at:Home»Reviews»Drivers»MVP Resistor Review 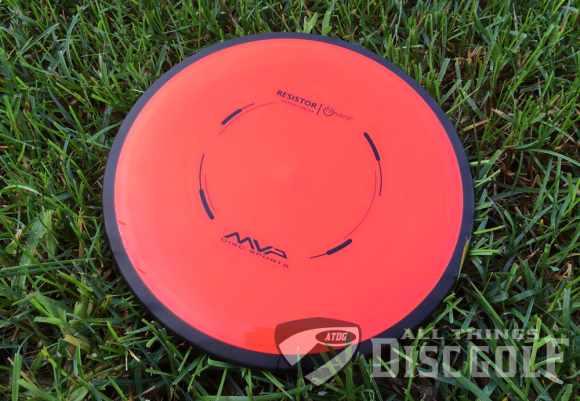 MVP Disc Sports got into the fairway driver category last October with the release of the Volt. After two other drivers (Amp and Shock), the initial line of drivers by MVP was complete. All three fell in the Speed 8-9 category. This year, MVP is adding to their lineup, but slowing things down just a little bit. The MVP Resistor is a fairway driver with a very flat top and overstable flight.

MVP says this about the Resistor:

The Resistor is part of a new slower family of fairway drivers with a more controllable speed. The combination of its flat overstable profile and GYRO™ technology allows it to resist turn and experience a strong reliable fade. This disc executes accuracy and rangeability like a dream.

MVP sent us a Resistor to try out and we took it, along with a MVP Proton Volt and Neutron Shock, to the course to see how it performed along side it’s faster cousins.

The Resistor has a 1.7 cm rim while the Shock, Amp and Volt have a 1.8 cm rim. Even though it is just 0.1 cm smaller, you can tell there is a size difference. Another notable feature of the Resistor is the very flat top. There is barely any shoulder on the top of the flight plate before you get to a board flat top. This gives the Resistor a very small feel in the hand. This small feel also helps you be in control of the disc.

With our first throws we could tell that the Resistor would not be as long as our Volt and Shock. While you could chalk this up to the slower speed, the biggest factor in the shorter flights was the lack of glide. The Volt glides beautifully down the fairway and the Shock will hold in the air as it fades out, the Resistor never wanted to glide much at all. If you’re needing some extra distance from the Resistor, your best shot might be a moderately high sweeping hyzer shot. It needs some added height to carry out a full flight.

The Resistor was described as an overstable driver and that is without a doubt the case. The Resistor will resist any turn at high speeds. We were able to get some very strong throws off and the Resistor would hold the angle of release the entire throw. You can certainly trust the Resistor into a headwind as well. 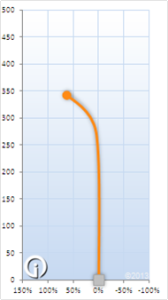 The Resistor’s fade was similar to MVP’s Tensor. The Resistor has a very forward fade, but it does it with some punch. It wasn’t heading to the left on a sharp angle, but it was doing it with enough fade to fight through some wind. The fade was strong enough to bring it out of an anhyzer pretty easily too.

Overall, we’d give the MVP Resistor flight ratings of 7, 2.75, 0, 2.75. It is certainly slower than the previous family of fairway drivers from MVP and comes with less glide. Our strongest throws with the Resistor were with some added height to allow the Resistor to fly. Any time we had a sweeping hyzer shot the Resistor performed beautifully. We never felt like we were going to lose control of it.

The initial flight chart from inbounds Disc Golf shows the very stable flight at the beginning followed by the forward fade. We weren’t quite getting the same distance out of the Resistor as illustrated in the graphic though. Once inbounds gets more flight data, we’ll update the flight path.

If you’re looking for a very reliable, overstable fairway driver that you can control, the MVP Resistor will do the trick. Stronger arms might actually see some overlap with the MVP Vector. The Vector has more glide which could allow it to reach distances very similar to what you’re getting from the Resistor. Sometimes though you just need a little more distance with some added control. The Resistor will do just that.