The second of first four distance drivers from MVP Disc Sports is finally here. Not long after the release of the MVP Inertia, we were able to get our hands on the MVP Tesla. The Tesla is a neutral to slightly overstable distance driver that slots in right above the MVP Volt.

MVP has a lot to say about the Tesla:

The Tesla’s responsive design balances a subtle turn and reliable fade, while a pronounced glide and forward finish gain extra distance. The Tesla extends high power or headwind lines and has plenty of bite to fade back reliably and reduce lateral drift. The Tesla can be considered the big brother to our acclaimed Volt fairway driver. Choose the Tesla for long-range pinpoint accuracy.

Big brother to the Volt, eh? That certainly sounds like a phrase people will like, but does it really compare? In reality, yes, it does.

The Tesla has a different core than the Inertia, but the same wing size (20.0mm). It isn’t the fasted driver on the market, but it does have a bump in speed over the Volt. After a slight shoulder on the top plate, the Tesla has a very flat top. This leads to a very slim profile in the hand. This translates nicely to a very clean release and something many will enjoy. The Tesla isn’t a very deep disc. If you have big hands or big fingers, it could be a little hard to grip due to the lack of depth.

Our first tests with the Tesla were done in about 20-25 mph winds. Not the most ideal testing conditions, but we were anxious to see what it could do in the wind. We weren’t expecting a major wind fighter, but it did perform better than expected. If you have power to throw 350 feet on a consistent basis, the Tesla can hold up in a headwind. You might need to give it a little hyzer, but it won’t crash and burn. Now, if you have 400-450 foot power, headwinds and the Tesla won’t play well. You just put too much power on it.

We even tested it in some left to right crosswinds to see just how stable it could act and for the 350 foot power throwers, it actually performed quite well. It wouldn’t be our first choice for a wind fighting driver, but in a pinch, it could work.

In the wind, the fade was there, but it never flew too far to the left. It would slow down and almost just drop to the ground.

We should also note that if you have a big right to left wind and give it too much hyzer and too my height on release, and you tell one of your testers to not throw it over the fence about 350 feet away, it will easily catch the wind and fly over said fence. We digress….

After jumping the fence, nearly losing it on the roof, and finally putting it back in the hands of someone who wouldn’t do careless things with the Tesla, we got back to testing. We went out the next morning in much calmer conditions to further decide just what the Tesla flies like.

With very little wind, we can easily determine that the Tesla can create some very straight and controllable distance shots. The Tesla does have a small amount of turn (equal to the Volt), and just a tad more fade (very Volt-esque). With a flat release, it will kick into a slight turn, but a stable turn, and carry down the fairway before flexing back to right past center. It won’t produce big skips and it won’t carry too far left. It is a very straight disc when all is said and done.

In terms of distance, we were certainly getting it past our Speed 7-9 drivers and seeing distances right where we would expect them. If you’re a fan of the Volt and want a little (not much) added distance, the Tesla could do the trick. 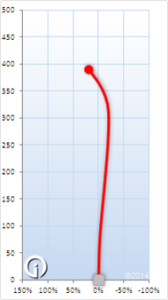 Overall, we’d rate the Tesla at 10, 4, -1, 2. You’ll get a good amount of speed, decent glide and a very straight flight. If you give it some hyzer, it will fly very straight with a small fade, while a flat release will lead to a very tight s-curve shot. Regardless, it is very controllable.

The flight chart from inbounds Disc Golf shows this flight too. A little turn, a little fade, and nice distance.

The MVP Tesla is a disc with not much to hate. Straight line, controllable distance can easily be achieved with the Tesla. It isn’t the longest disc on the market, but it doesn’t need to be in order to perform this well. Power throwers will see a little more action out of it, but even slower arms will be able to produce with it.

From tight shots to wide open holes, MVP fans can reach for the Tesla and see a flight of the Volt on steroids.

Continuing with their normal pattern, MVP has now released the Tesla in Proton plastic and sent us one to check out.

One of the most desired things from disc golfers is consistency and MVP has produced the Tesla in Proton plastic with a flight that is darn near identical to the Neutron version. We were still able to get it to do a small hyzer flip, ride on down the fairway, and then finish to the left with a moderate amount of power. It might be just a fraction more stable at high speeds, but it is nearly impossible to tell.