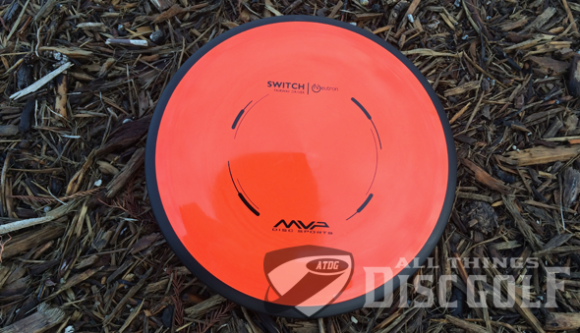 The third member of MVP Disc Sports’ slower class of drivers is the MVP Switch. While the Resistor is overstable, the Servo is neutral, the Switch is the understable counterpart. Just like the other discs just noted, the Switch is also a slower version of the Amp.

MVP says this about the Switch:

The Switch is part of a new class of fairway drivers with a lower power requirement and more controllable speed. Its extended GYRO Push and understable profile offers smooth controlled turnovers and a delayed minimal fade.  This disc will excel with its ability to cruise for low power throwers.  The controlled turnover in conjunction with minimal fade allows for superb accuracy in tight fairways.

While the Switch is a slower version of the Amp, it is also a little more understable, but carries a very similar flight. With every one of our throws with the Switch we noticed a very nice hyzer flip flight or controllable left to right flight with a moderate finish. It has a very similar to speed to the Resistor and Servo which should appeal to beginning and more skilled disc golfers alike.

The Switch comes out very clean and gets right into its intended flight pattern. There is little doubt the Switch is an understable disc. On a flat release it will quickly start to turn and head to the right. If you give it some height and start your throw a little to the left of center and you’ll get a very long sweeping anhyzer shot. You don’t need to help it turn over much, it has enough to turn on its own.

If you release with some hyzer it will flip up, track right a little, before settling down. You’ll need quite a bit of hyzer or bring down the speed to get a perfectly straight line. The Switch’s fade is very minimal. It does have a little, but it won’t send your throw that far left at all.

The Switch relies more on speed than glide to get down the fairway. It doesn’t have a huge amount of glide, but enough to keep it aloft long enough. If the Switch had a little more glide, it would really lead to some very far distances for a disc with this amount of speed. 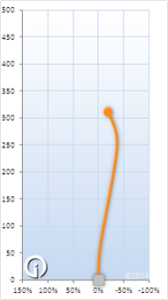 With all that said, we have to mention a second time that the Switch is very beginner friendly. If you’re looking to get started with disc golf or help turn a friend onto the sport, the Switch could be a great disc to start with.

Overall we’d rate the Switch at 6, 3.5 to 4, -3, 1. You’ll get a very familiar fairway speed, moderate glide, and enough turn to really hit that understable flight you’re looking for out of a disc like this. While it does have fade, don’t expect a lot.

The flight chart from inbounds Disc Golf shows a nearly identical flight to what we experienced.  The turn kicks in early and really helps send the Switch to the right. If you give it enough height, you’ll be throwing beautiful anhyzers all day.

No matter your arm speed though, the Switch is will be a very comfortable disc. It can be a great understable compliment to the Servo. If you were wanting something with a little less stability with an equally great amount of control, the Switch is worth a look. It can fill a hole in many bags.