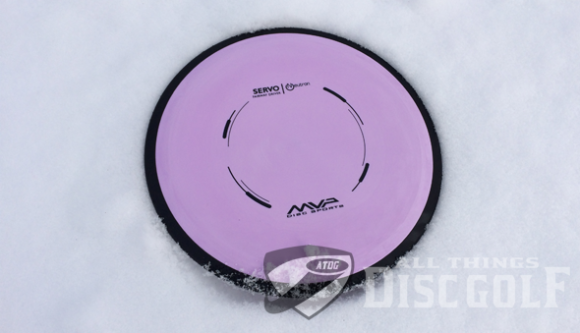 Right on the heels of the release of the Resistor, MVP Disc Sports has put out the second entry in their latest line of fairway drivers. The MVP Disc Sports Servo has less stability than the Resistor and one of the straightest flights you’ll find in a fairway driver. MVP sent us a Servo to review and after having it in our hands waiting for a break in the weather to give it a toss, we finally made it out to a local course to see what the Servo was up to.

MVP says this about the Servo:

The Servo is part of a new class of fairway drivers with a lower power requirement and more controllable speed. Its extended GYRO™ Push yields a straighter lateral movement and immense glide with an effortless forward fade. Both high- and low-power throwers alike will achieve easy pinpoint accuracy with ultimate line control, making the Servo their go-to placement driver in the fairway.

The Servo has the same core as the Resistor. As with the Resistor, the Servo has a smaller rim width than it’s faster Volt cousin. For those who find high speed drivers to be too difficult to hold, the Servo’s rim will be exactly what you’re looking for. It has enough mass to give you something to hold onto, but is small enough to not feel like it is going to slip out of your hand.

Luckily, we had a very mild winter day to do our testing which allowed us to throw the Servo in near ideal conditions. We started out in the field to see what the Servo could do when thrown with a flat release on a straight line. The Servo got up to speed quickly, showed a slight turn to the right before having just enough fade to bring it back just past center. After just a handful of throws, we realized it was one of the straightest fairway drivers we’ve thrown.

If you give the Servo a little hyzer on release, it will flip up flat and fly on the exactly line you expected it to. If you did give it a little hyzer on release, it will fade a little further left than with a flat release. The fade though comes in very late and it almost knifes down. It will hang in the air about as long as possible before diving left. The Servo’s glide is equal to an Innova Eagle. It isn’t quite as much as a Teebird, but has more glide than the Resistor. 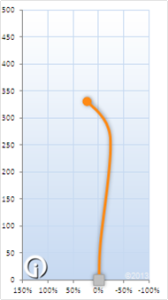 We gave the Servo a few throws into a headwind as well during our tests. While the Servo doesn’t hate a headwind, it doesn’t love it either. It didn’t flip all the way over, but isn’t the most stable option as well. If you do see a headwind, there are better options out there.

Overall, we’d rate the Servo at 7, 4, -1, 2. It has a very controllable flight with a little turn followed by just enough fade. The speed is right where you’d want a fairway driver to be and the glide is enough to keep it aloft without having it glide too much on you.

Looking at the flight chart from inbounds Disc Golf you’ll see nearly the exact flight we are talking about. The turn kicks in early before holding that line. The fade at the end of the flight comes in late and it just strong enough to break it out of the turn and bring it past center.

We said it before, but the Servo was one of the most controllable fairway drivers we’ve thrown. It doesn’t have a lot of glide and likely isn’t the longest Speed 7 disc we’ve used, but it is one of the straightest. Depending on your release angle you’ll be able to see many different lines out of it.

We’ll even say that the Servo is currently the most beginner friendly driver that MVP Disc Sports makes. It will be hard to beat.