MVP knows the Motion should perform as advertised as an overstable driver you can rely on.

The Motion is designed to resist turnover from power or headwind during a long straight travel, followed by a reliable fade. Fans of the Resistor will appreciate the Motion’s extended distance with familiar characteristics. While it serves as a utility driver for average-power throwers, high-power throwers will find a trustworthy straight-to-overstable distance workhorse. Forehand throwers will find its overstability especially useful for torque resistance.

MVP sent us a Motion and we were anxious to see how this stacked up not only against the other distance drivers, but up against the Resistor and Shock.

The Motion is again in the same Speed 10 or so range and easily fits along side the Tesla. The rim isn’t too terribly wide which, like it’s counterparts, gives you a great step forward for distance drivers. The Motion has a very flat top, just like the Resistor and Shock. This gives you a very small profile to hold and makes it feel like a disc that loves some power.

We couldn’t wait to really lean into one and see just how stable the Motion really was. Well, it only took one throw and we could tell that the Motion was indeed quite stable at high speeds. There was not even a hint of turn in it on our strongest throws. It would hold the angle of release and remain on that angle for the entire flight. If it had a little anhzyer, it would quickly flex back out and fly straight. If you have a headwind in front of you the Motion will do exactly what you were wanting. It will hold up like a champ and continue to fly straight and battle that wind. From the strongest arms in our test group to the weakest arms, there was no doubt the Motion wouldn’t turn over at all. You could also make an argument that the turn rating is on more towards a positive 0.25 than just a 0.

The Motion does have a decent amount of glide to keep it a loft, but it won’t glide out too much on you. It seemed very similar to the Tesla in terms of glide. Because of how overstable it is, and the moderate amount of glide, you’ll get a very controllable driver. We found it similar to a slightly faster Innova Firebird.

With how stable it is at high speeds, the Motion’s fade is actually quite predictable. It won’t cut in that hard, but it will finish to the left on a consistent basis. If you keep it low enough, you’ll get a decent skip out of it too. What we liked about the Motion’s finish was the fact that while it was hard, it wasn’t wanting to shoot straight to the left and had a little bit of a forward fade to it. You don’t need to be intimidated by the Motion’s fade though. It is certainly a controllable finish and can be very useful. 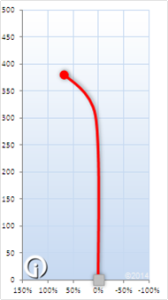 On a big hyzer shot the Motion will give you that beautiful arc that you’re wanting. The glide is enough to keep it in the air while the resistance to turn will help it hold the angle the entire flight. The Motion might not be as overstable at the end that some would be looking for, but there is very little to hate about how it fades.

Overall, we’d give the MVP Motion ratings of 10, 4, 0, 3. It is very stable at the start of the flight and will resist a turn at all costs. The end of the flight is certainly on the strong side, but it isn’t a fade to be scared of.

The flight chart from inbounds Disc Golf shows this type of flight we were experiencing. You will see virtually no turn out of it as it flies on a very straight line. The fade at the end is strong, but isn’t the strongest fade out there.

You might notice the flight numbers are equal to the Discmania PD. Is the MVP Motion the same as the PD? Not quite. The Motion is a little more stable at high speeds and the glide is a little different. The PD tends to glide a little straighter before fading at the end while the Motion’s glide helps it remain a lot during the fade. It’s a little hard to explain, but the flights are slightly different. Using inbounds Disc Golf again, the flight patterns are just slightly different.

If you think the MVP Tesla was a little too understable for you and want a more stable alternative, the MVP Motion is the disc you want. They have a similar feel in the hand, but the Motion will fly on a very stable line before finishing to the left on every throw. If you’re one that forehands a lot of drivers, the Motion will be able to stand up to anything you throw at it.

For fans of MVP Disc Sports, the Motion will be very close to what you’ve been wanting in a distance driver. Sure, it doesn’t reach that Speed 13 range that many are still clamoring for, but it is the type of disc that loves some power.