MVP says the Inertia will be a distance driver for many skill levels:

The Inertia is the grand debut of our 20mm-wing distance driver class.  This class of controllable distance drivers will all have a wide weight range from 155g to 175g.  This allows for an unmatched GYRO Push to give throwers increased control in their distance drives.  The Inertia’s understable profile will allow high power throwers to achieve consistent hyzerflips that will carry far and accurately.  Its Neutral flight for low power throwers will allow for reliably straight distance lines with accuracy. 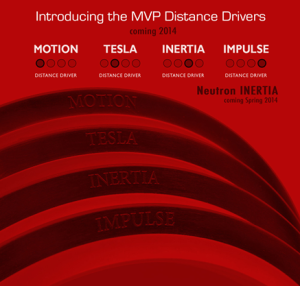 MVP sent us an Inertia to review and after some time in the field and on the course our experiences have not only left us impressed, but also anxious to see what their other distance drivers will be like. Even though the Inertia is the widest rimmed disc produced by MVP so far, it still has a very comfortable feel in the hand. It is actually quite shallow too. This is neither a positive or a negative, but worth noting. Also, because the rim is just 2.0cm wide, you don’t feel like you’re gripping a really high speed driver. The size of the rim won’t be intimidating.

The Intertia, while correctly called a distance driver, is more in the speed class of the Innova Wraith, Discmania PD, or Discraft Avenger and not in the class of the Innova Destroyer and Discraft Nuke. It is certainly faster than a fairway, but isn’t a warp speed type driver. For those MVP fans who were wanting something longer than a Volt, Shock, or Amp, will be pleased though.

For an average to above average arm strength, the Inertia will show plenty of turn. On a flat throw, you’ll be able to produce a very nice long turnover shot from the Inertia. It won’t take long to kick into the turn and start to head right. It will hold this line for nearly the entire flight. It won’t want to turn into a roller right away, but it will remain in a turn. If you do turn it over a little more on purpose, it will hit the ground into a roller, but not without the help.

With that said, the Inertia won’t shy away from a hyzer flip. Give it some hyzer on release it and it will flip up flat, start to kick into a small turn before finishing. These were very straight flights with a tight s-turn shape. Power throwers will love the accuracy they receive with the Inertia when they give it a little angle on release.

While it has a noticeable amount of turn, it does not have a lot of fade. The Inertia will break out of the turn just a little at the end of the flight to land flat, but it won’t head back to the left by much. The limited fade does allow for a very controllable turnover shot. You won’t have to worry about it returning too much. Weaker arms might notice a little more fade than stronger arms though. If you aren’t able to get the Inertia to turn much, expect a little fade.

The final noticeable feature of the Inertia is the amount of glide. It has slightly more glide than the slower class of drivers from MVP (Volt, Amp, Shock). It isn’t an extreme amount of glide, but enough to help you gain some distance.

Overall, we’d rate the Inertia at 10.5, 4.5 to 4.75, -3, 1 to 1.25. The combination of speed, glide and turn make for a great entry into the distance driver category from MVP. It does in fact have a notable amount of turn to create some nice turnovers and hyzer flip shots for power throwers and a very controllable flight for lower powered players.

With three other distance drivers coming soon from MVP Disc Sports, it is clear to us why they went with the Inertia first. From beginners to experienced disc golfers and anyone in between, there is little to hate about the Inertia. Different levels of disc golfers will see different flights out of it, but regardless of the outcome it will be something they’d be looking for. Controllable straight shots to long turnovers with great placement. Only time will tell what the other three distance drivers will be like. The next few months should be fun.

After releasing their complete set of distance drivers in Neutron plastic, MVP has moved into the Proton production stage for their drivers. MVP sent us a Proton Inertia to review and a note saying they were hoping to put this disc right inbetween the Inertia and the slightly more stable Tesla. We gave the Inertia flight numbers of 10.5, 4.5 to 4.75, -3, 1 to 1.25 and rated the Tesla at 10, 4, -1, 2. Based on our previous experience with the MVP Volt in both Neutron and Proton plastic, we expected the Proton Inertia to follow form and be a little more stable than the Neutron version.

It didn’t take long to see, true to MVP’s form, they achieved what they set out to do. The Proton Inertia is a touch more stable, but still shows some turn. We were still able to easily have the Inertia flip up on a hyzer release, hit flat, show some slight turn and carry down the fairway. The amount of turn was less than in the Neutron plastic, but helped create a disc that slots right in between the Neutron Inertia and Neutron Tesla.

The strongest arms in our testing group were able to get the most turn out of it, but even arms with 300-350 foot power were able to get a little bit of action at high speeds. The Neutron Inertia at times had a little too much turn for really strong high power shots. You would need to compensate with a little more hyzer on release in order to keep the disc from flipping too fast. The Proton version of the Inertia holds up better and doesn’t mind the added power.

As we said before with the Neutron version, the Proton version would be appealing to disc golfer of any skill levels. The added stability will give power throwers some added control while weaker arms will still find a disc they can get to turn, but not lose control of.

Overall, we’d rate the MVP Inertia in Proton plastic at 10.5, 4.5, -2, 1. The only noticeable difference between the plastic versions is the amount of turn. Nearly every other quality is the same. You’ll get slightly less turn with the same slight fade at the end of the flight. If a slightly more stable Inertia is what you’ve been wanting and the Tesla is too stable, the Proton Inertia is what you’re looking for.