You are at:Home»Interviews»A moment with Ian Anderson from Central Coast Disc Golf 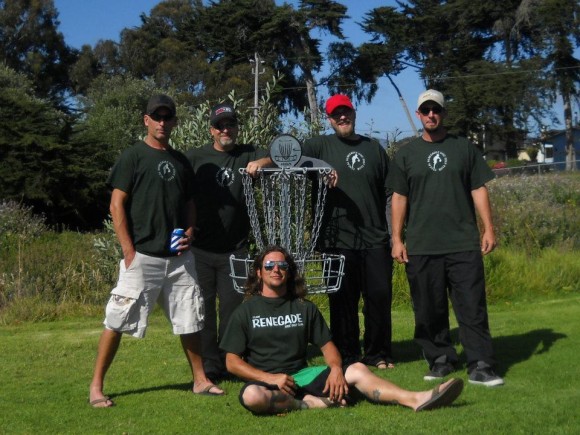 All Things Disc Golf: What made you start doing disc golf commentaries?

Ian Anderson: I started doing commentaries to makeup for the bad video quality that was on YouTube at the time. I wanted to help the viewer follow along with the action. I was doing commentary for a video game YouTube channel called, “rdtteamawesome.” And I’ve watched more sports coverage than is reasonable for one human being, so I felt comfortable doing it.

And the disc golf videos: It was back in 2011 and Worlds was going to be in Santa Cruz that summer so all the Pros were in the area. The weekend before Worlds, The Santa Maria Open was put on and a bunch of big name pros said they were going to be there: Eric McCabe, Will Schusterick, etc. So I asked a bunch of people if they would watch footage of the tournament if I filmed it and people said Yes, so off we went. That’s was the start.

All Things Disc Golf: How long does it take to put together and publish one video; from filming, to editing, doing the commentary, rendering the graphics and then posting it online?

Ian Anderson: Gosh. Maybe 10-15 hours? Maybe even 20. I’m hoping to be able to do next-day videos for The Master’s Cup. We’ll see if I can pull it off! I’m going to make a “DeLa” template editing file, so hopefully that will help.

All Things Disc Golf: How many videos are you working on now?

Ian Anderson: I usually do one at a time but our backlog looks like this:

All Things Disc Golf: What can you tell me about your “Side-arm Sidekick,” – as he is affectionately referred to around here?

Ian Anderson: That’s my buddy Kevin Estrada. He’s still living on the Central Coast of California where I used to live until last July, and he has always helped me film a ton. He showed a real interest and passion for the sport – not to mention solid filming skills – so I bought a second camera so we could cover even more disc golf. He had the great idea to join me for commentaries and the rest is history. We’re actually a pretty even match on the Disc Golf course too.

All Things Disc Golf: How did you Kevin meet?

Ian Anderson: We met in 2010 while playing disc golf at Heilmann park. I really enjoyed playing rounds with him and it just progressed from there.

All Things Disc Golf: You two sound so genuinely flabbergasted during your commentaries watching the Pros play; what do you think it is about this game that does that to so many people?

Ian Anderson: I think we’re amazed by the Pros so often because we play the game and we know how incredibly difficult what they’re doing is. Me and Kev are better than the average player, and those Pros still make us looks like total noobs. I think it’s the same for other people. Once you play the game, you realize how amazing these Pros are.

All Things Disc Golf: What’s your home course and how long have you been playing?

Ian Anderson: My current home course is Morley Field in San Diego, for the last three years it was Heilmann Park in Atascadero, CA. And I’ve been playing for 12 years.

All Things Disc Golf: What has been the response to your videos?

Ian Anderson: Overwhelmingly positive! I’ve had a couple people not like my commentary, but for the most part they’ve been well received. Thankfully!

All Things Disc Golf: Who is your favorite player to watch/cover?

Ian Anderson: My favorite player to cover has to be Paul Mcbeth. He’s super nice; will chat with me during the round; and always helps out with his disc info. A close second is Gregg Barsby. Again, super nice and very personable. I always love filming my buddy Peter McBride too. That kid is talented, super humble, and really nice. I almost forgot to mention Shasta Criss! They don’t come much nicer than him. OH! And Philo. You can’t forget Philo.

All Things Disc Golf: Do you know any of the players personally?

Ian Anderson: The only player I know on a personal level is Peter McBride, but I’m friendly with some of the MPO guys when I see them at tourneys.

All Things Disc Golf: What do you do outside of disc golf?

Ian Anderson: My real job is being an Industrial Engineer for a major US fast food company. I do time studies on new products, and capacity analysis using discrete event simulation, among other random stuff.

At home I’ve got a six-month old boy – and a future Disc Golf superstar – and an amazing wife who is a saint for tolerating all my disc golf shenanigans.

As for other hobbies; I used to play video games but gave them up for editing video. I play slow-pitch softball a couple times a week. I play racquetball when I can. I’m a low “A” ranked player. And, of course, I go out and play disc golf as much as I can.

All Things Disc Golf: What are their names?

All Things Disc Golf: Have you partnered up with any other people filming rounds? Are you open to accepting submissions?

Ian Anderson: Yes and Yes! Currently we have Stu Dunn filming for us in the Texas area – he filmed the Texas State Championships, and Glass Blown Open FPO cards. My friend Derek Kurtti helped me film the Wintertime Open, and is going to help me with other LA based tourneys. My brother-in-law Josh Totemwongse also helps me with audio processing. Putte Andersson is on backup in that department as well. Richard Preble has also recently started to help me with editing, which I’m super excited about. I also do commentary for YouTube channel: “lcgm8,” and I’m open to doing it for other channels. I’m super thankful for all the help everyone has provided, the DG community, and our fans are amazing

All Things Disc Golf: When you did the commentary for the European open and Copenhagen open you had footage from tournaments you had never played before, or seen in person; do you just call the videos blind or does the videographer give you some inside information beforehand?

Ian Anderson: I’ve only done this for lcmg8 so far, and Juha usually gives me notes. I usually watch the video several times beforehand too. It also helped that I’ve watched past years of those tournaments before, so I was somewhat familiar with the courses.

All Things Disc Golf: What tournament would you like to cover?

Ian Anderson: As many as I can! I’m going to cover Worlds for the first time this year when it’s up in Portland. I grew up there so I’m super excited for that! Stu Dunn our Texas chapter of CCDG will hopefully be joining us, along with Juha from Finland, and Possibly JR (also from Finland) from lcgm8. It should make for some really amazing coverage.

I’d also really love to film a Beaver State Fling in Oregon. Milo McIver is probably my favorite course. It’s amazingly beautiful there, and the course design is second to none. Anything in Europe or Japan would be amazing as well. I love how seriously the game is taken abroad.

All Things Disc Golf: So for worlds, will this be working with the PDGA or on your own?

Ian Anderson: Worlds is without PDGA support. I approached them, but they were just hiring a media guy so things were a bit uncertain. I should probably contact them again.

All Things Disc Golf: In the future would you consider covering a live event, like the “Disc Golf Guy” Terry Miller has been doing?

Ian Anderson: Absolutely, but with the caveat that it’s done really well. In my opinion you need to have a minimum of four, maybe even five cameras going to keep live-coverage interesting. I really appreciate what Terry is doing for the sport. I just think that with the current budgetary limitations in the sport, post-editing of tournament footage is the best way to go right now.

All Things Disc Golf: You are rarely seen in your videos; was this done purposefully?

Ian Anderson: In the beginning I was trying to be somewhat anonymous, but not anymore. You can find me in some review videos, and some old course videos with Kev.

Ian Anderson plays golf and loves his family in San Diego, California. He is a part of Central Coast Disc Golf and can be found on YouTube.