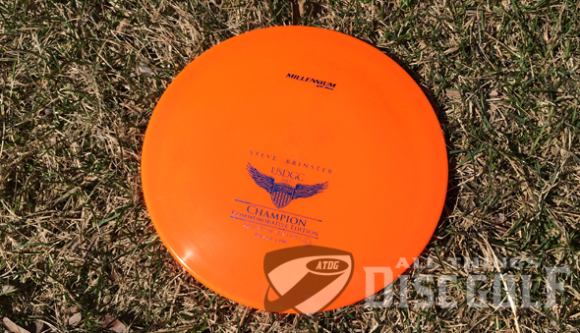 In an interview with All Things Disc Golf in mid-February, the folks at Millennium Golf Discs announced they were releasing a special edition Sentinel along with a new sponsorship of 2013 USDGC champion Steve Brinster. After extensive testing, a run of just 2,100 have been released.

In our previous interview, Millennium’s Jessie Vahsholtz, stated this run would run wouldn’t be identical to the old San Marino mold Sentinels, but would come close, “The plastic has come a long way since the old San Marino runs, and the type of plastic has a major impact on the final outcome. We know what Steve likes to throw, and we’re working closely with him to deliver a product that he likes and that we can all get behind.”

Millennium sent us a Sentinel out of this special run to review and after some time with it, we think both Brinster and Sentinel fans alike should enjoy the final product.

The Steve Brinster Sentinel has a slightly slanted shoulder before a flat top. These certainly aren’t as domey as previous runs and certainly aren’t as flat as the San Marino mold. With that said, there isn’t a lot to dislike about the feel of this run of Sentinels. When you are gripping the disc, the shoulder fits comfortable in the hand and the flat top isn’t a problem at all and won’t affect the grip.

The plastic used is a slightly gummy and soft blend of their Quantum plastic which is akin to Innova’s champion plastic (Innova molds the Millennium line). The rim is firm while the flight plate has a little give to it. If you are facing a hole where you really need to dig into it and let it rip, you can have confidence in this Sentinel.

The flight of the Steve Brinster Sentinel is something tough to hate. You get a very stable flight at high speeds followed by a nice strong fade at the end. We were actually a little surprised by just how stable this Sentinel was at high speeds. We could almost put together an argument they are more stable at high speeds than the San Marino run. We faced a moderate headwind on one hole and the Sentinel was no slouch. It held up exactly as you would want it to and continued to fight forward. It never thought of turning.

The Steve Brinster Sentinel will hold whatever line you release it on. Need the sweeping hyzer? Give it some hyzer on release and just watch it fly. Want a little flex shot that will still finish left? You can try and turn it over, but it will fight out and finish left just like you wanted it to. It can certainly handle some power too, but more on that in a moment. 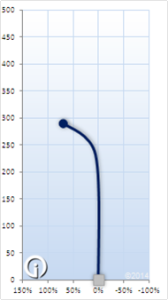 The Sentinel’s fade comes in late, but it comes in strong. It is certainly more than a Roc, but is less than a Gator for comparison sake. If you keep it low, it will also produce a pretty decent skip for you. More than some other midranges with a similar speed. Even when facing that headwind, the Sentinel would still finish left.

The Sentinel is certainly a faster midrange and would fall in that Speed 5 category. It also will rely on speed over glide to get down the fairway. While some midranges will glide on down the fairway, the Sentinel will just want to get there in a hurry. Because of that, and the stability at high speeds, you can really lean into it and give it all you got. It can, and will, handle it.

Overall, we’d rate the Millennium Sentinel Steve Brinster Edition at 5, 3, 0, 3.5. It is very stable and can hold up in a headwind easily. Combined with the speed and moderate glide, you have an overstable midrange that is tough to hate.

The flight chart from inbounds Disc Golf shows the exact flight you’ll get from the Sentinel. Very stable with a late fade that will certainly cut to the left.

After all of that, even though they weren’t able to bring back the San Marino mold of the Sentinel, they have come about as close as possible to recreating the flight (and possibly making it better). You get a slight shoulder before a flat top in a nice blend of Quantum plastic. If you’re a fan of the old Sentinels or you’ve never thrown one and are looking for an overstable midrange with a little speed to it, we think you’ll like what they’ve come up with.

Reply To will Cancel Reply