At the start of the day on Saturday, the standings were as close as they have been all tournament. The Men’s Open division saw the top four of Ricky Wysocki, Paul Ulibarri, Paul McBeth, and Nate Doss separated by just three shots. In Women’s Open, Catrina Allen had a three shot lead on Ragna Bygde with Ohn Scroggins and Paige Pierce right behind. In Masters, it was down to either Ken Climo or Barry Schultz with Climo holding a two shot advantage heading into the final day.

Playing at Blue Lake Park, the start of the semifinals was a rough one for Ulibarri who started with a bogey and carded a four while the rest of the card came in with pars. That error would soon prove to me minor as Doss had back to back bogeys on holes three and four which virtually set him out of title contention. Doss’s error would again be topped when the group made its way to hole 8.

While Wysocki, Ulibarri and Doss all threw their drives inbounds, McBeth struggled. After tossing his tee shot out of bounds, McBeth took his penalty stroke and reteed. Now throwing his third shot of the hole, he again could not keep it inbounds and was forced to take a another penalty stroke while still sitting on the tee pad. He finally made it in bounds, but was forced to take a seven on the whole while the rest took birdies with a two. This five shot swing seemed as if it ended any hopes of McBeth’s run to three straight World Championships.

With Wysocki and Ulibarri in first and second, it was only until hole 11 when Ulibarri would run into the OB and card a seven of his own. With Wysocki maintaining strong form through the first 11 holes, it appeared as if he would have a comfortable lead going into the finals. Through 11 holes, Wysocki sat at -8 for the round while McBeth was just at -2. This is when McBeth would refocus and take a load of momentum into the finals. McBeth would bridie the remaining seven holes to finish the round at 10 under par. Wysocki would only birdie three of the seven and even carded a bogey five on the final hole while McBeth would take a birdie three. This put Wysocki at just -11 for the round and pushed McBeth to just two behind Wysocki heading into the finals.

Wysocki would lead into the final nine with a two shot lead on McBeth with Ulibarri three behind the leader in third. Doss rounded out the top card, but sat six shots behind Wysocki with just nine holes to play. What happened next could easily go down as the best finish to a PDGA World Championship ever.

On the first hole of the final nine, back to hole one at Blue Lake, Wysocki’s drive landed OB and he was forced to take a par on the opening hole of the final nine. McBeth’s birdie cut the deficit to only one. Hole two saw McBeth can a 50 foot putt after Wysocki was left with just a 15 footer of his own to maintain the one shot lead. Hole the is where McBeth saw the light. After barely avoiding the OB, McBeth walked away with a birdie just as Wysocki chained out and was forced to take a par. After just one third of the final nine, Wysocki and McBeth were now tied.

The duo traded birdies until the sixth hole of the final nine. This is the same hole in which McBeth took his seven on in the semifinals. McBeth’s drive landed in bounds but was roughly 50 feet beyond the basket. Wysocki was closer, but still had a tough putt facing him for birdie. McBeth was up first and saw his putt float high, touch the top band of the basket and land out of bounds. Wysocki had a chance to take a two shot advantage, but left his putt low and was forced to take a par to McBeth’s bogey.

Holes seven and eight of the final nine (holes 13 and 14 at Blue Lake) were two of the most dramatic holes of the tournament. Fresh off retaking the lead, Wysocki launched a big forehand drive only to watch it land out of bounds. McBeth put his drive in the heart of the fairway and was looking at a chance to take advantage of Wysocki’s error. With already one penalty stroke on him, on Wysocki threw his third shot out of bounds as well and was forced to take another penalty. Wysocki was able to make his putt and take a five while McBeth tallied a three to take a one shot lead with just two holes remaining.

Hole eight of the final nine was a 910 foot hole with plenty of OB awaiting the leaders. McBeth’s drive barely remained in bounds just before Wysocki absolutely crushed his drive. McBeth’s approach, which was more of a second drive, put him behind a tree, but with a window for an eagle-three. Wysocki wasn’t as close to the pin after his approach, but had a cleaner look at the basket. Wysocki lined up his long putt and, to the delight of the massive gallery, he canned the eagle to put the pressure back on McBeth. McBeth gave his putt a strong look, but missed it chain high to the right of the basket. He didn’t do himself any help and was left with quite the comeback putt for birdie. After a deep breath, McBeth hit the birdie and we walked to the final hole of the final nine with McBeth and Wysocki tied at the top.

The final hole of the final nine saw both top pros hit the heart of the fairway, hit beautiful approach shots, and hit key putts to force a playoff. The excitement and electricity in the air was something we’ve never seen in disc golf. This was one for the history books.

The playoff began with both McBeth and Wysocki trading blows through the first five holes. After pars on the first hole of the playoff, Wysocki parked his drive and put the pressure on McBeth. McBeth didn’t back down and nearly aced the 450 foot hole and hit the 25 foot putt to keep things deadlocked after two playoff holes. The duo both took pars on the third hole before returning to the same hole in which McBeth took his seven, Hole seven. Wysocki’s drive was a little short while McBeth skipped to about 15 feet away from the basket. Wysocki barely hit his 33 foot putt as McBeth canned his to head to the fifth hole of the playoff.

After near identical drives and a great second shot by McBeth, Wysocki’s saw his second shot hit a tree no more than 25 feet in front of him. This was the window McBeth was hoping for. While Wysocki was able to recover on his third shot, he was clearly at the end of his journey. McBeth made the approach toward the elevated basket knowing he was one putt away from winning. Wysocki canned his par and all the pressure was on McBeth. With a tough uphill putt in front of him, and one of the largest galleries disc golf has seen, McBeth hit the heart of the chains and claimed his third straight PDGA World Championship.

Wysocki finished in second place while Doss shook off a rough start to the finals and was able to snag third thanks to six straight birdies to end the finals. Ulibarri, who led nearly the entire weekend, finished with two bogeys in the final three holes to end his tournament in fourth. 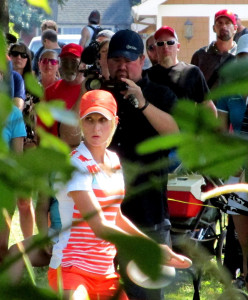 For the Women’s Open division, the one name we’ve talked about throughout the weekend was Catrina Allen’s. Allen led on day one and after the semi finals at Pier Park and the final nine at Blue Lake, Allen was able to call her self a World Champion for the first time. While Allen would end up winning the title by two shots, her final day of play was no cake walk.

In the semifinals, Allen would go on to shoot an even par 54 which was enough to maintain a lead of just three heading into the finals. After a tough day on Friday, it was Paige Pierce shooting up the leaderboard with a 49 at Pier Park to jump into second place. Pierce was in the hunt for her third overall and second straight World Championship and had the momentum heading into the final nine.

Pierce was able to leap frog Ragna Bygde who remained in third after a 55 in the semifinals. The battle for the final spot in the women’s finals came down to Ohn Scoggins and Val Jenkins. Scoggins had a string of three straight bogeys on holes 13, 14, and 15 to give Jenkins a chance to sneak into the finals. Jenkins was not able to take advantage of it and Scoggins secured the final spot in the final nine.

With that three shot advantage, Allen would have to ride a roller coaster in the finals which included an eight on the fifth hole of the finals after a few putts couldn’t quite find the raised basket. Things would settle down with four straight pars as Allen would comfortably move into position on the final hole knowing she would be named World Champion.

Allen’s title is her first in her career. 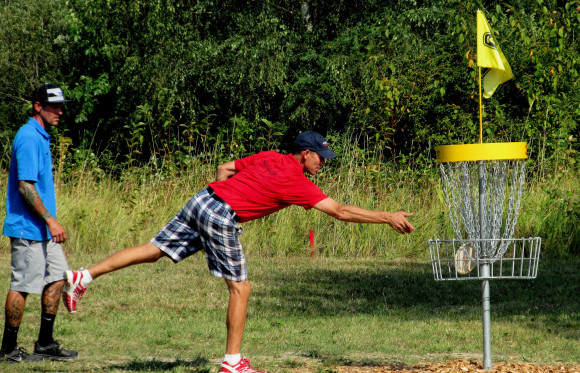 2012 PDGA Masters World Champion Ken Climo held a two shot lead on 2013 Masters World Champion Barry Schultz with just 27 holes remaining in the tournament. The semifinals proved to be very dramatic for both golfers as their scorecards were tallied with countless birdies, but also coupled with some poorly timed bogeys. Schultz had Climo’s card in the semis and his 61 was two shots better than Climo’s 63 to bring the pair even heading into the finals at Blue Lake.

The finals started off on a sour note for Climo as he had to card a bogey on the first hole to give Schultz the one shot advantage. The “Champ” kept his cool and evened things back up on hole two. Climo and Schultz would trade shots through the next two holes until they arrived at the sixth hole of the finals, the same hole seven at Blue Lake that has been the story of the tournament. Climo’s drive on the par three hole would land OB and he’d be forced to retee and would card the bogey with just three holes remaining. With the pressure on Schultz, he was able to secure a solid drive and hit the birdie to take a two shot lead on the defending champion.

The bogey didn’t force Climo to admit defeat. If anything, it gave him the fuel needed to win. A birdie on hole 7 by Climo combined with a par by Schultz cut the advantage to just one. The birdie train continued for Climo on hole eight and we saw Climo and Schultz head to the final hole of the tournament tied after Schultz’s birdie attempt was chained out. Both drives were well placed on the final hole, but Climo’s approach was much cleaner and put the pressure on Schultz who was facing a 50 foot putt. Schultz wasn’t able to convert the long putt and Climo dropped in for his second Masters World Championship and his 14th World Title overall.