You are at:Home»Featured»McBeth, Pierce pick up second PDGA World Championships 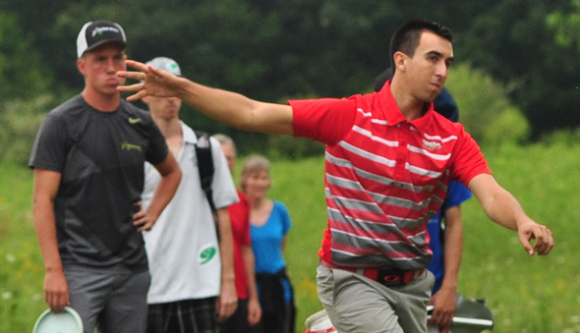 Saturday afternoon at the Lemon Lake Disc Golf complex, Paul McBeth joined a very elite group of disc golfers. McBeth became just the fifth disc golfer in the Open division to win the World Championships twice and one of three to win it in back-to-back years. He did this by playing consistent golf all week long. While the pressure was on McBeth from day one, he was able to grab an early lead and hold onto it.

After the first day of play, McBeth found himself tied with Nate Doss after an afternoon on the long Gold course at Lemon Lake. While big names like Dave Feldberg and Steve Rico were just two shots behind, others like Nikko Locastro and Will Schusterick were six and seven back respectively. That early gap proved to be key as the week went on.

Wednesday, the Open field took to the White and Blue courses and when all was said and done McBeth was alone on top, but with a slim lead. Cale Leviska and Cameron Colglazier were just one behind the defending World Champ with three of the first six rounds in the book. On lower cards, Locastro and Schusterick were both able to pick up shots on McBeth as they climbed up the leaderboard.

After another trip on the Gold course on Thursday and a trip down White and Blue on Friday, the standings were still very tight, but Team Innova’s McBeth still stood on the top of the field. While McBeth’s play was as good as ever, the hottest hands were right on his heals. Putting was a tough spot for Locastro as the week went on and caused him to remain just two shots back heading into the semifinals. Locastro’s Prodigy teammate, Schusterick, was three shots behind McBeth, while Latitude 64’s Feldberg was four behind. With the semifinals and Final 9 remaining, just four shots separated the top four disc golfers. For those hoping for an exciting finish to Worlds, you got your wish.

AFter the field was cut for the semifinals, the spotlight was on the lead card of McBeth, Locastro, Schusterick, and Feldberg. While the putter was getting hotter for Locastro, McBeth was able to not only hold onto his lead, he was able to extend it by two shots on the rest of the card. This gave McBeth a three shot cushion with just nine monster holes to play. The final four golfers took to the final 9 layout to determine who would take home the crown.

On the first hole of the final 9, McBeth took a par while the other three took birdies. Was this a sign of things to come? On hole two, Schusterick and Locastro gave that shot right back as they carded a bogey five and McBeth took the par. Starting with hole three, McBeth would birdie the rest of the holes and claim his second straight World Championship.

The last disc golfer to win his multiple World Championships in the Open division was Nate Doss in 2007 when he won his second of three titles. Barry Schultz was the last to win back-to-back titles when he did it in 2003 and 2004. 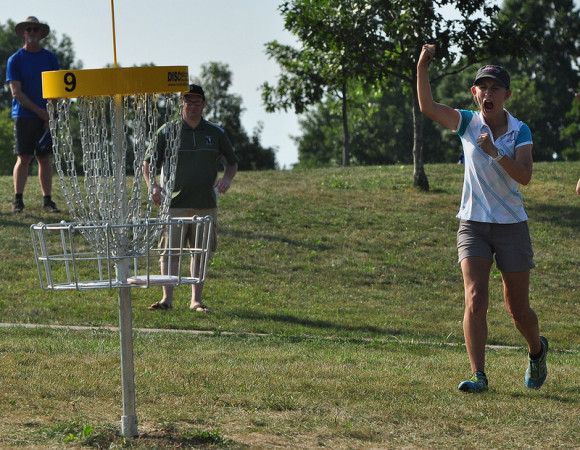 While McBeth grabbed a lead early and held onto it, Paige Pierce needed every single hole in order two win her second World Championship. Pierce found herself in a three way tie for the lead after day one. Joining Pierce were Catrina Allen and Ragna Bygde while Val Jenkins and Des Reading were just one throw behind the trio.

Wednesday’s third round took the women to the Gold course where Pierce shot a 61 even while carding a six on the final hole. This gave Pierce a three shot lead with three rounds before semifinals remaining. The lead would not be safe though. Round four saw Jenkins surge back into a tie with Pierce. After round five, Jenkins held a two shot lead over Pierce with time running out. After equalling each other in round six, Jenkins stood two shots ahead of Pierce heading into the semis.

Pierce was able to even things up over the next 18 holes to put her in a tie with Jenkins with just the Final 9 remaining. On the very first hole of the Final 9, Pierce took a bogey and Jenkins took a par. Jenkins gave up the lead on hole four before having things tied up after five of the final nine holes. Things remained tied until Pierce was able to birdie the final hole of the Championship and take her second World Championship in three years.

Last year, Ken Climo showed Barry Schultz how to win a Masters World Championship. This year Schultz showed Climo he knew exactly how to do it — and did it in exciting fashion. Schultz jumped out to a lead in the first round and just kept on the gas. Schultz shot a blistering hot 46 in the semifinals to extend his lead over Climo to 13 throws. He later went on to win the title by 11.

This is Schultz’s first World Championship in Masters and his third over all (2003, 2004 in Open).