You are at:Home»Instruction»Lost discs: practical, preventative steps to avoid that void in your bag 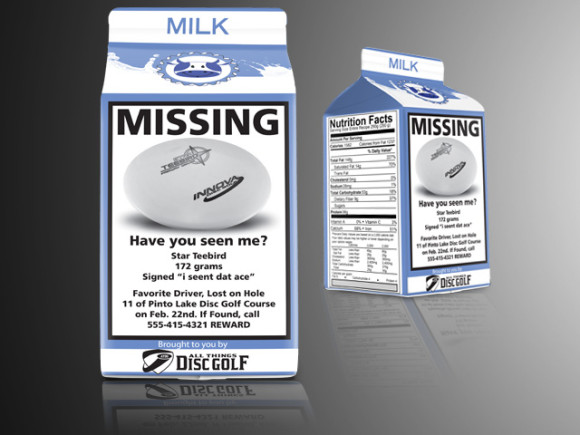 Discs ain’t cheap- especially if everything you throw is premium plastic or rubber that runs $15 or more a pop. And we all own some that would fall into the category of ‘it’s not the money'; discs that are worked in just the way we want, discs that are out of production, in high demand, hard to replace, or have sentimental value. Equipment is part (albeit, in my opinion, a minor part) of what enables us to perform our best, and if our most important tool is suddenly gone, our game is likely to suffer.

For all these reasons, it makes sense to have a strategy to reduce the lost disc factor. Below is a collection of observations I’ve made over time and some changes I’ve made based on those observations.

This collection of discs from the author’s bag show the consistency and readability of his ‘personal branding’. Look closely, and you’ll notice that some need a fresh coat, which they received right after the photo was taken. (Photo by Jack Trageser)

There is an unwritten rule in disc golf that a person is less obligated to try to find the owner of a found disc when it is completely devoid of a name, number, or identifying mark. So it naturally follows that unmarked discs get reunited with their owners far less often than those that are marked. But lets dig a little deeper. Everyone approaches labeling their discs a little differently, so what type of markings produce the best results in terms of getting back the lost little lambs? 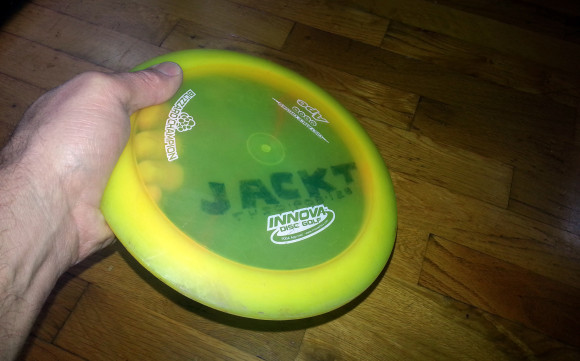 Even pretty see-through discs must be branded. The author writes backwards on the bottom so it reads correctly on top. (Photo by Jack Trageser)

Whereas the first point dealt with retrieving discs from others who find them, this one concerns being able to find them after an errant throw. The color of a disc significantly impacts the chance of spotting it on the course. You players who frequent wide open courses, or courses where the terrain is all manicured, regularly mowed grass might feel they can ignore this section- but read on. Disc golfers love to travel to new courses, and chances are you’ll at some point play courses like the ones I frequent in Santa Cruz and Monterey, CA. Thick bushes and ground cover, tall grass and dense, gnarly trees abound, and that’s just on the fairways!

Seriously, though, playing here has forced me to take ‘spot-ibility’ into consideration when selecting discs. Whenever possible, I choose discs in solid, bright, unnatural colors. That way I can search for the color more than the shape of the disc. Kind of like those old natural selection experiments we read about in textbooks using white and dark moths and white and dark trees- except in reverse. The discs that stand out most are the ones that will survive. 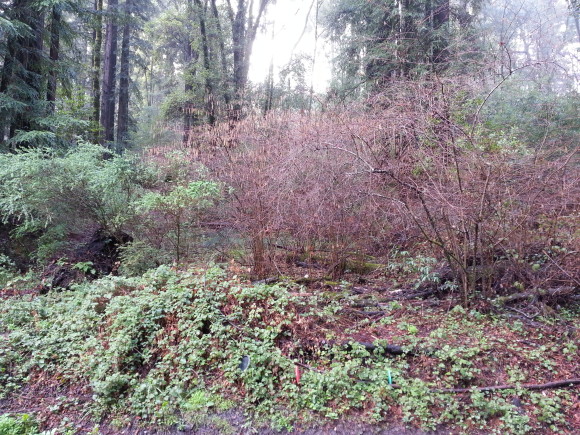 Quick- how many discs do you see? Which one caught your eye first? Enlarge the picture if necessary. Especially when only the edge is showing, bright colors really make a difference. (Photo by Jack Trageser)

Black, dark green, and any discs in earth tones that blend in with the terrain are obvious loss-risks (although manufacturers still make them and people still buy ’em). Another kind of easy-to-lose color is more surprising; even if the colors are bright and unnatural, tie-dye and really any multi-colored discs are hard to spot as well. The variegated patterns help them blend into nearly any background. Tie-dye shirts jump out at you, but not tie-dye discs. Go figure.

We’ve covered a couple things you can do in preparation of playing to reduce lost discs. Now let’s examine a few habits and activities that tend increase the separation of player and disc.

Sometimes when we throw a really bad shot and know it immediately, it’s hard to watch. I really do think we sometimes turn away or cover out eyes not to be dramatic, but because it’s painful to see a well-planned shot gone bad. I’m guilty of this as much as anyone, and it’s a situation that sometimes leads to a lost disc. If I don’t see exactly where it lands I have less of an idea specifically where to start searching for it.

Where I play, hiding places are numerous and discs can get lost on even the most innocuous of throws. So I try hard to watch my disc closely, no matter how ugly the result. I try to remember to commit where it lands to memory, and if it disappears from sight before it comes to rest, I try to note the trajectory and some type of nearby landmark as a reference point to begin the search. The word ‘try’ was in italics because occasionally I note those things but forget them immediately, making the whole exercise pointless. The trick is to pay attention to where your disc goes and retain that information until it’s time to look for it.

Here’s another one. Ever thrown a drive – maybe just before dark, or warming up for a tournament right before it’s about to start – and get the impulse, because of the unsatisfactory results, to throw one more? A little voice warns ‘Don’t do it!’ but you ignore the warning, launch the disc, and almost immediately regret it. A disc golf version of ‘one too many’, it seems the odds of losing the disc in situations like this for some reason dramatically increase. The only advice here is to listen to that little voice, and remember that as Shakespeare wrote in Henry IV, ‘discretion is the better part of valor’. Let that disc live to fly another day.

A variation of this affliction is known as ‘throwing the bag’, in which one is impelled to throw every disc in one’s quiver- usually on a particularly awe-inspiring hole. Two things can go wrong here: Either you throw so many discs that you forget one in the search-and-rescue effort, or you throw so many that the odds that at least one gets lost increases. If you can’t resist throwing multiple discs on an irresistible hole, try to note and remember the location of each disc you throw. The odds that one of your babies gets lost on its own won’t go down, but at least you won’t arrive at the landing zone with that ‘uh-oh’ feeling.

The subject of playing new courses while traveling was mentioned above, but is worth revisiting. If you’re playing a course you’ve never played before – especially if you’re just passing through and likely not to return any time soon, and especially especially if you’re playing solo – consider leaving your most precious discs out of the bag. When you don’t know the course it’s much easier to lose a disc, and when you’re solo the odds of finding it go down. Having a local as a guide helps quite a bit, but if you do lose a disc on that faraway course, odds of having it returned are not great. Instead, bring some ‘stunt doubles’ that won’t hurt as much to lose. Your score may suffer a little, but that sting is temporary compared to the loss of a key disc.

As a side note, it should also go without saying that being in an altered state of mind is often a contributing factor to lost – or forgotten – discs. To each his or her own, but play straight-edge and you’ll be amazed at how many fewer discs you ‘lose’. Disc golf should be enough in and of itself, anyway.

Golfers can easily get attached ( and that’s an understatement) to their equipment. The difference is, ball golfers bond with clubs but it’s the balls that go flying away into the horizon. In disc golf, there is only the disc- and us disc golfers can bond with one mighty quick. If I can prevent just one separation of player and disc, then this post was worth the effort.