You are at:Home»Reviews»Drivers»Legacy Discs Outlaw Review

It’s finally here. For a while now, fans of Legacy Discs have wanted a distance driver that was slightly slower than their Cannon or Rampage, but still something they can get down the fairway. What the fans, and owner Steve Rico, were wanting was essentially a “Legacy Destroyer” of sorts. It took a lot of testing and development, but the Legacy Discs Outlaw is ready to hit your bag and it doesn’t mess around.

Legacy says this about their latest driver:

The missing puzzle piece between our Distance Drivers and Fairway Drivers. The Outlaw will come off the tee with high speed but less than that of a Rampage and Cannon. The slower speed allows the thrower to have more control but still get distance. Whether you are a backhand or sidearm player the Outlaw WILL find a place in your bag.

Legacy sent us an Outlaw in their Icon plastic for this review. We were anxious to try the Outlaw after all the talk and waiting over the previous months. Right when you pick up the Outlaw you’ll realize you’re holding something familiar, but it still has a flavor of its own. What we’re trying to say is that yes, the Outlaw does feel like a Destroyer, but it isn’t an exact clone. If that was Legacy’s goal, they nailed it.

The Icon plastic is nice and grippy, feels very durable, and is actually a little on the gummy side. We felt like we could really dig a thumb into it with a lot of confidence. For a high speed disc like the Outlaw this is a welcome sight when you’re going for some monster distance.

The Outlaw certainly is a fast disc and is quite stable, but if you have the arm for it you’ll see a lot of control. The Outlaw loves power. It performs best when it has some zip behind it. While Legacy puts the turn rating at a -1, we never quite saw that much turn in our test. In fact, for the majority of our testing group, the Outlaw showed virtually no turn. It wasn’t the hardest 0 rating we’ve seen, but we could put a lot of trust into the Outlaw. We never once never felt like the Outlaw would turn over on us or start to move off the initial line.

The strongest arms in our group saw a hint of turn on their strongest throws, we couldn’t call it a -1, but would easily settle on a -0.5. If you have 400+ power, this turn might show up, but you would need a near perfect throw with the Outlaw to make it happen. Even if you do have the power required, the Outlaw won’t be considered flippy either. Have no fear of the Outlaw performing unexpectedly—it won’t.

While the Outlaw holds up quite well at high speeds, it has a very predictable finish. It has an obvious fade, but it likely won’t have the strongest fade in your bag. On every throw we had with the Outlaw the fade was there every time. It’s exactly what you’re looking for with a disc like the Outlaw. You want to crush a throw, watch it carry down the fairway and finish left every time and the Outlaw will do it.

If you keep the Outlaw low you will see a little bit of a skip from it, but it won’t be too crazy. If it comes in on a little steeper angle and digs into the ground a little bit the Outlaw will finish very close to where it first hit. The Icon plastic helps kill some of the energy of the Outlaw when it first makes contact.

The Outlaw could easily fill the “big hyzer” shot. We could consistently pump it out on a big hyzer line and watch it carry out a full arc with a finish right where we wanted it. Crush it hard and long and let the Outlaw do the work. The results will be pleasing.

Another spot where the Outlaw is slightly different from Innova’s Destroyer is in the glide department. The Outlaw isn’t a brick, but it doesn’t quite hit that 5 mark for glide. Even the strongest arms who got that slight turn couldn’t quite get the Outlaw to glide. Now, this isn’t really a negative, but just the nature of its flight. This does lead to a little added control though. It won’t glide out on you, but you can force it into a slight s-curve and let it fade back out with some added control. 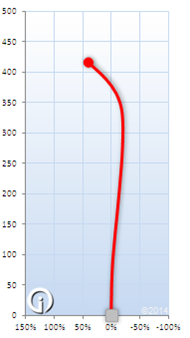 Overall, we’d rate the Legacy Discs Outlaw at 12, 4, 0, 3. For really strong arms, we’d adjust that to 12, 4, -0.5, 3. You’ll get the stable flight you’re looking for out of a distance driver like the Outlaw with a reliable finish and virtually no turn.

The flight chart from inbounds Disc Golf shows a flight that is slightly less stable than even our strongest arms were seeing. The Outlaw will certainly bomb on the fairway though and will easily fit the bill as a go-to distance driver.

It didn’t take long for us to realize the true potential of the Outlaw. We won’t be surprised when we see these popping up in people’s bags. You get a great stable to overstable distance driver in some of the best plastic around. We’d be curious to see how a lighter weight Outlaw holds up and would love to see a slightly beat in Outlaw as part of the line up as well.

The closest comparison to a disc currently on the market would be to an S/DS Destroyer. Disc golfers everywhere look for those overstable Destroyers all the time. They pay top dollar for these fliers that will be in their bags for years. We can safely say that you no longer have to pay through the roof for a disc that flies like an S/DS Destroyer. It’s right here in Legacy’s Icon plastic. It’s the Legacy Outlaw.