Over the course of three days the top disc golfers in the world battled across many different courses in central Illinois as part of the 2015 Ledgestone Insurance Open. The pros were competing for the largest disc golf purse in the history of the sport. With $125,000 in total payout, the men’s Open winner would walk away with $6,600 and the women’s Open winner snagging $3,000 for herself. Arguably most importantly was the $20,000 check that was awarded to the St. Jude Children’s Research Hospital at the end of the event. 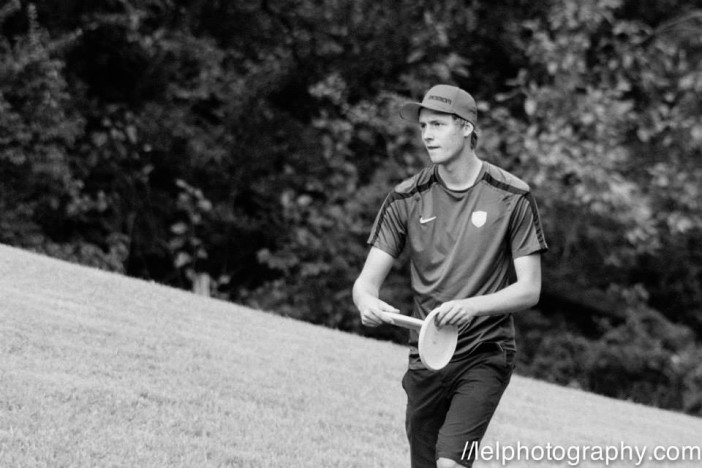 The men’s Open division’s top pool of players played the following schedule for the tournament:

Each course had something to test the pros with the main feature being Out of Bounds (OB) ropes. Many of these holes had OB rules of “Stroke and Distance” instead of the penalty stroke and playing your next shot from where it was last in bounds. You continue to throw from your previous lie until the disc would land safely. If you were to look at the live scoring, seeing scores of in the range of 7-10 were certainly common. One error can quickly snowball into quite the score.

Friday’s first round saw a slightly less known name on the top of the leaderboard after the round at Northwood Park in Morton, Illinois. Zach Melton finished the day as the lone leader at -11 (47) and did so without carding a bogey on the course lined with plenty of OB. Melton’s bogey free round wasn’t the only mistake free day as Nikko Locastro, two time champion of this tournament, sat in second at -10 (48). Locastro was joined by Nate Krahn in a tie for second. Third place saw the trio of Cameron Colglazier, young Izak McDonald, and Cale Leiviska all two shots back at -9 (49) at the end of the first day of play.

The lead Pool of players shifted to McNaughton Park in Pekin, Illinois for the first round of the day on Saturday. The well-established course was easily handled by Simon Lizotte who carved up the course on his way to a -13 (47) to help jump up the leaderboard. Paul McBeth was right on his heels with a -12 (48) as was Ricky Wysocki -11 (49) which included back-to-back eagle-twos on holes 15 and 16. From the long tees at McNaughton, those twos are no joke.

After the round at McNaughton, the pros returned to Northwoods for another round to finish the day. This is where Lizotte and McBeth began to pull themselves away from the field. Lizotte’s -11 (47) kept him at the top of the leaderboard as McBeth’s -8 (50) moved the duo into a tie with three rounds in the books. Leiviska didn’t want to miss out on the action and moved into a tie for third with his own -11 (47). JohnE McCray jumped into that tie for third and secured his spot on the top card going into the fourth round.

Pool A for the men moved to Lake Eureka and were set to play it’s new temp course which featured a lot of water, tight OB lines, and the difficult “stroke and distance” rule. McBeth and Lizotte shot virtually identical rounds through the first 17 holes. The pair had the same scores on 15 of the first 17 holes as the swapped par for birdie on the two remaining holes. Hole 18, a 340 foot straight shot saw Lizotte throw out of bounds and was forced to take a bogey-four as McBeth completed his birdie to take the two shot lead going into the Final 9.

McBeth and Lizotte finished the fourth round with a comfortable lead on the rest of the field. McBeth sat 11 shots in front of third place. Colglazier used a very impressive -3 (57) to jump into third place and secure a spot in the finals in his fourth round. The traditional “top 4″ for the finals would become a “top 5″ as McCray found himself tied with Nate Doss who squeezed into the tie for fourth and a place in the finals.

The fivesome were faced with nine more holes to determine the winner. While anything could happen, the battle was really between McBeth and Lizotte as they were just two shots apart. The daunting OB and difficult holes were certainly ready to test the pros and it didn’t take long for the scores to jump up.

After three holes, the leaders swapped birdies a few times until Lizotte was just one shot behind McBeth. On the fourth hole of the finals Lizotte took a big hyzer route that really pleased the large gallery on hand to setup an approach to a basket with a cliff and water surrounding it. McBeth also took the hyzer line and was faced with a slightly longer approach shot. McBeth just barely missed his intended line and landed in the water. Knowing McBeth threw OB, Lizotte needed to remain in bounds with the chance to tie things up.

“This is by far my biggest paycheck ever. I had $4,000 in Australia, but the money isn’t that important. Beating the other guys is a dream come true.”
– Simon Lizotte

A safe approach shot still left him with some work to do, but was able to take a four as McBeth’s penalty shot led to a five and the crowd saw the pair tied again with five holes to play.

The rest of the card on the finals saw themselves batting a lot of OB on some frustrating shots that were landing just feet from the OB ropes. Don’t let the high scores fool you. These guys were really going for it and taking some chances. The errors weren’t large by any means, but the frustration levels were certainly high for many in the competition.

Hole five played downhill, through a bridge, and onto an island green. McBeth and Lizotte both laid up into the safe zone instead of going for the island off the tee. McBeth’s approach fell short of the island and opened the door for Lizotte. Lizotte confidently reached for an S-Line P2 and put it just feet from the basket. His eventual birdie combined with McBeth’s bogey gave him a two shot lead.

With momentum on his side, Lizotte gained another shot on McBeth on the next hole after a beautiful approach shot left him with an easy birdie. McBeth’s approach didn’t carry as far as he had hoped and was forced to take a par.

Three holes remained and Lizotte was sitting with a three shot lead. McBeth knew he had to make a move on this next hole as the last two holes didn’t have much of an opening. The seventh hole of the finals was a very uphill climb with the basket on an island behind a water tower. McBeth opted to go beyond the initial landing zone and aimed for the island with hopes of gaining at least a shot on Lizotte. McBeth’s drive had the distance into a stiff headwind, but the flight was straighter than he wanted and landed 40 feet outside the island. Lizotte safely landed in the landing zone and took a par. His result combined with McBeth’s double bogey gave him a five shot lead with just two holes to play.

Sitting on the tee with two holes to play McBeth knew his chances of winning were very slim. The pair exchanged a double bogey on the eighth hole after landing their shots in the water. The final hole was a little ceremonial as only a big mistake by Lizotte would change the end result. Two big drives by Lizotte and McBeth were greeted with applause from the gallery as Lizotte played it safe and left himself with a tap in to claim his first win on the PDGA National Tour.

After the win, we asked Lizotte about taking home the winning prize of $6,600 and he said while it feels great, it wasn’t the most important thing, “This is by far my biggest paycheck ever. I had $4,000 in Australia, but the money isn’t that important. Beating the other guys is a dream come true.”

Lizotte says he had knew exactly what he had to do in order to win this tournament after trailing McBeth by two shots, “I had to wait for Paul to make mistakes. Pay my layup game, keep getting pars, grab a birdie when possible, and wait for mistakes and take advantage of them.”

Doss was able to jump up to third place in the finals with Colglazier and McCray rounding out the rest of the group.

The women’s Open side of the Ledgestone Insurance Open came down to the very end to determine a winner. In fact, extra holes were needed.

We’re going to fast forward to Saturday’s rounds to really tell the true story. After rounds at Westwood Park, Sunset Hills, and Bradley Park to start the week, Saturday morning the top women disc golfers returned to Sunset Hills for the fourth round. During the fourth round it was the trio of Valarie Jenkins, Catrina Allen, and Paige Pierce separating themselves from the field. Jenkins ended the round with a one shot lead but both Allen and Pierce were tied for second just one shot behind. Jessica Weese was able to secure the fourth spot in the finals, but trailed Jenkins by eight shots with just the nine holes remaining.

On the very first hole of the finals which played over water with some tough OB on either side saw Allen and Weese take the only two pars. Allen’s result combined with a bogey from Jenkins put her into a tie for the lead as Pierce’s double bogey put her two shots back of the leaders. Allen took the lead by a shot on the next hole, but then the third hole really shook things up.

Allen took a whopping 11 after battling with the OB on the third hole as Pierce and Jenkins both carded a six. This swung things in the complete other direction. Jenkins now led Pierce by two and Allen dropped to four shots back in third place.

Hole four found Allen and Pierce with pars as Jenkins’ bogey gave up one shot to the other two in contention. Allen bounced back and moved back into a tie for the lead on the fifth hole of the finals with a par combined with a triple bogey for Jenkins and quadruple bogey for Pierce. Allen and Jenkins were tied with Pierce now two shots back.

Pierce dropped even further back on hole six after a double bogey and pars for Allen and Jenkins. Three holes remained and Jenkins and Allen were tied atop the leaderboard.

Hole seven of the finals is where Pierce knew she had to make a move. This is the same uphill hole with an island green behind a water tower. Pierce went for the island off the tee with a strong headwind right in her face and nailed it. This was one of the most impressive drives many will ever see. Allen wasn’t able to land in bounds and carded a six with Jenkins hitting a five. This swing put Pierce and Allen just one shot behind Jenkins with two holes to play.

Hole eight played downhill into a landing zone on a volleyball court before an approach to a very tight green with water behind the basket. Pierce hit a four while Jenkins took a triple bogey and Allen a double bogey. This put Pierce into a one shot lead with just one hole to play.

The playoff returned to the first hole of the finals where both drives landed safely, but Pierce tossed her approach shot into the water and allowed Allen to take her par for the National Tour victory.

It was one impressive battle. From taking an 11 on the third hole to winning it in a playoff, Allen certainly had one roller coaster of a victory at the Ledgestone Insurance Open.