You are at:Home»Reviews»Drivers»Latitude 64 Scythe Review 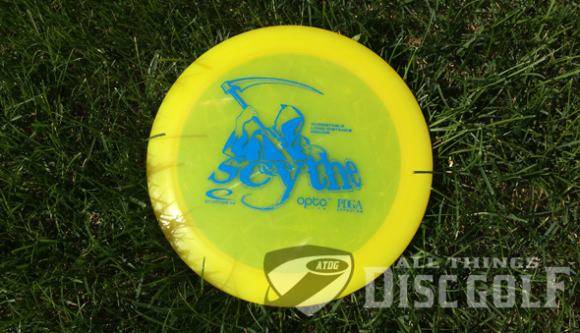 One of the shots that disc golfers often struggle finding a disc for is the stable to overstable distance shot. You need a disc that can carry as far as possible, remain stable, but is still controllable. There are some discs that leave you wanting some more speed. Some aren’t as stable and even others are too stable. Finding the right mixture is tough. One disc that could fill that void is the Latitude 64 Scythe.

Latitude 64 says you can expect the combination of speed and control with the Scythe.

It will slice through the air like a sharp scythe slices through grass. This is an overstable and very reliable high speed driver, produced for the experienced players that need a disc to deliver both speed and control.

Dynamic Discs sent us a Scythe to review and we quickly took it to our testing team. The Scythe is in the “distance driver” category, but it isn’t in the “warp speed” category either. The rim fits comfortably in the hand and isn’t very intimidating. It isn’t very deep, but isn’t that shallow either. Hands of all shapes and sizes should find the Scythe appealing when it comes to grip. The slight shoulder also gives it a very small profile, but with a hint of dome. This creates a very smooth release which can help translate to added distance.

When you first put a rip on the Scythe, you’ll realize that you can really reach back and let one go without fear of having the Scythe turn over. It isn’t as stable as the Dynamic Discs Enforcer, but it will resist turn. It hits that sweet spot of being stable without fighting back against you. If you are a forehand golfer, the Scythe should perform nicely for you. You’ll be able to get a strong enough grip on it and rely on it to not turn over on you to produce a beautiful flight. For shots where you’re facing a headwind, the Scythe could do the trick and perform as expected.

As the Scythe carries down the fairway you’ll see it wants to lean more on speed than it does glide to carry distance. There is a touch of glide, but it doesn’t have the most glide on the market. It has enough to keep it moving and helps you keep control of it in many conditions. If you need a sweeping hyzer shot with a little distance, you can trust the Scythe will remain in the air and hold the style of flight you’re looking for.

When the Scythe beings to slow down, the fade will arrive as predicted. For us, it was the right mix of strength and control. We expected it to fade out, but we never felt like it got away from us. If we kept it low, it would produce a skip, but never one that was too much.

Throughout every toss with the Scythe we always felt like we were in control. That is a tough trait to find in a distance driver. While you’d want something a little less stable for your every day distance shots, for the ones where you need a little more stability, we could see the Scythe hitting many disc golf bags as a staple. You are often faced with shots where you need to get up and over some trees, yet need some distance, or you need something to fly straight, but fade around a tree or another obstacle. The Scythe can be that disc. It can really b e a disc you can trust. 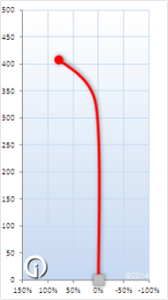 The flight chart from inbounds Disc Golf shows this long stable flight we were describing. You won’t see a lot of turn, but you will see some nice distance.

In the end, we were trying to find a way to describe the Latitude 64 Scythe to others and it finally hit us. The Scythe can be compared to one of the most sought out discs out there: the Innova S/DS Destroyer. We’re talking about the overstable ones that people are always looking for. They are looking for that familiar feel, but just want that added stability. In the air the Scythe really looks similar. If you’ve been looking to replace that old S/DS Destroyer that might have beat in a little too much, or you’ve been wanting one and didn’t want to pay the high price tag, the Latitude 64 Scythe might be the answer.

Dynamic Discs has also sent us a pair of Scythes to giveaway before they go on sale to our readers! The deadline to enter is 11:59 p.m. Central Time on Friday, May 9. Winner will be announced on in the afternoon on, May 10 on our Facebook page.

The new @Latitude64 Scythe is no joke! @ATDiscGolf is giving away one away on Twitter http://is.gd/ATDG_Scythe #discgolf