You are at:Home»Reviews»Drivers»Latitude 64 Saint Pro Review

In 2012, Latitude 64 released the Saint driver. In 2013, they released its slightly more stable brother, the Latitude 64 Saint Pro. Don’t let the “pro” part of the name scare you away. This type of disc golf disc can be a very useful tool to disc golfers of any level.

Reliable with enough stability, controllable both for turns and distance. Why did we choose to call it Saint Pro instead of giving it a name of its own? Simply because it uses 66% of the Saint’s mold parts. The Saint has been a hit for us, getting great reviews on several continents and now can we offer a version of it for people that liked the Saint but found it to be a little bit too understable for their big arms.

We had a few Saint Pros sent our way to review and were fortunate enough to test the Saint Pro in Opto, Gold Line, and Moonshine plastics. All three discs were between 174-176g, but each had a slightly different flight to them.

We’ll begin talking about the Opto version and detail the changes where appropriate. Going into our tests we expected a very stable flight at high speeds followed by a decent amount of fade. Right as the Opto Saint Pro ripped from our hands we realized it was on a frozen rope straight ahead. There as virtually no turn as it got up to speed. If we needed to trust a shot to hit a window or not drift to the right, we could lean on the Saint Pro. If you needed a shot facing a headwind, the Opto Saint pro would do the trick.

With our first few throws we noticed that the Saint Pro does have a little less speed than its Saint brother. It certainly doesn’t lack speed, but is just a notch slower than the Saint. For us, the speed was right where we’d like it to be for a fairway driver. It isn’t as long as a distance driver, but you wouldn’t reach for the Saint Pro when you needed max distance. You get enough speed combined with great control and a very predictable flight.

It also appeared that the Saint Pro has slightly less glide than the Saint. The Saint would clearly show the added glide as it would carry down the fairway. The Saint Pro certainly isn’t a rock though. It felt like it had the right amount of glide when you consider the speed and control.

Now, at the end of the flight, the fade was never too much. You will certainly see the Saint Pro finish to the left, but it will never skip too far away from you. It doesn’t have a lot of forward penetration on the fade, but it won’t knife down either. 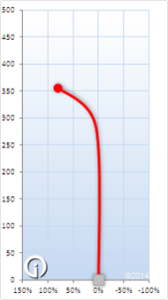 Like we mentioned previously, we were able to throw the Saint in all three plastics. The Opto Saint Pro was easily the most stable at high and low speeds. We saw no turn and a slightly stronger fade in the Opto plastic. The Gold Line Saint Pro was slightly less stable, but not by a very large margin. The Gold Line version did have a little bit of turn, but it was a very stable turn. It wouldn’t flip over on us by any means. The fade was also slightly less, but just by a few notches. Finally, the Moonshine Saint Pro was the least stable of the bunch in our tests. We noticed a little more turn and a little less fade. The turn was similar to that of an Innova Eagle. It will come out of it, but if you were facing a headwind, it might not be the best choice.

The Saint Pro could easily fit in any disc golfer’s bag. You can really lay into it and give it a strong rip and it will hold up to it. With the very controllable speed and stable flight, the Saint Pro will help you reach the basket with confidence.