You are at:Home»Reviews»Drivers»Latitude 64 Raketen Review

A little over a year ago, Latitude 64 released the Missilen in their new Opto Hex plastic. While it was certainly fast, many found it a little too overstable for their liking. Now, Latitude 64 has stuck with their Opto Hex plastic and used it on the new Raketen. The Raketen will bring a little turn and a softer fade which translates to a much easier to throw disc.

Latitude 64 says this about their new high speed driver:

Raketen (The Rocket in Swedish) is an extremely fast long distance driver due to the unique hexagon pattern. The HEX pattern helps the disc be less affected by air drag so it can fly faster, but at the same time you will lose a bit of the glide. This is quite easy to see when the disc touches the ground after a throw. It still has forward momentum and it is actually landing with more forward motion than a “normal” disc.

Compared to Latitude 64’s first HEX disc, Missilen, Raketen is easier to throw for slower arms and can be compared to their Bolt in stability. If you want to be the fastest guy on the course, pick up Raketen and start the countdown!

We were sent a Raketen by Dynamic Discs for this review. Before we talk about the flight itself, let’s revisit the plastic.

As stated above, the Opto Hex plastic is designed to allow it to cut through the air quicker, but this does cause the disc to show a little less glide. There are two areas without the hex pattern that are designed for where your thumb should go. When we first grabbed the Raketen one thing stood out to us. The untextured areas felt like it had more grip to them. There seems to be a little scuffing on it which gave us a little more grip. Was this by design? Was this there before on the Missilen? Are we a little crazy? The answer to all of those questions could just as easily be “yes” as it could be “no.”

The Raketen has a 2.4 cm rim which is slightly smaller than the Missilen’s (2.5 cm). That tenth of a centimeter isn’t much, but there is no doubt the Raketen has one thing on its mind: distance.

Just like the Missilen, the Raketen is one fast flier. The speed is certainly there and the Raketen thrives on it. To get the most out of the Raketen, it really needs to have a strong throw behind it. There is an element of control with it, but the max distance shots is where the Raketen will shine.

The Raketen does have a slightly more beginner friendly flight to it. It was easier to produce a little turn out of the Raketen when compared to the Missilen, but it is in no way a flippy disc. The turn is exactly the type of turn you’d hope to see out of a max distance disc like this. It needs the extra movement to really carry out a full flight and help it gain that distance.

Because it doesn’t have a large amount of glide, the fade of the Raketen won’t push too hard to the left, but it will certainly finish left of center. Other high speed drivers that want to fade hard will hang in the air a little longer and thus creating a little more right to left movement. We always saw the Raketen fade, but it never had any big skip finishes or got too out of control.

The flight we saw the most out of the Raketen was one of those tight s-curve style shots. The turn will help get things started and the fade will always be there at the end. Could you hyzer flip it? Sure, but that likely isn’t the best flight out of the disc. Grip it and rip the Raketen as hard as you can and let it fly.

Is it easier to throw than the Missilen? Yes, but keep in mind, this is still a fast disc. Just like any other disc above the Speed 13 rating, if you want to see the fully designed flight, you still need to get the disc up to speed. Will stronger arms find a lot to love with the Raketen? Yes, there is no reason why they wouldn’t. Slower arms will likely see a flight that is slightly more stable, but still easier to throw than the Missilen.

Distances that we saw out of the Raketen were certainly at the top end of our chart. Very few discs can get out to the distances the Raketen. We had looks for a birdie putt on a few holes where we tend to lack a little distance on with other discs in our bag. 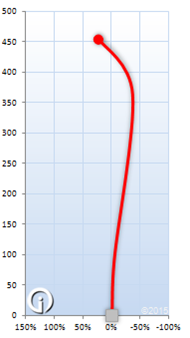 The flight chart from inbounds Disc Golf shows an overall flight close to what we were seeing. The s-curve will help it gain some distance and you should see some of your longest throws with the Raketen. At the time of this publishing, it currently ranks among the longest discs available according to inbounds Disc Golf.

As with the Missilen, we’d love to see the Raketen without the Hex patterns just to see how much the Hex plays a factor. The Raketen will undoubtably wants to fly fast. Distances were certainly there and came with a nice amount of control. We never had to worry about the Raketen turning too much and even fading too hard. Reach back, grab some power, and let one go with the Raketen. You’ll be walking for quite a while before you find it.