Innovation is good for any industry or business. In disc golf, innovation isn’t a foreign concept, but is often on the smaller scale. A tweak of a rim here, different plastic blend there, and so on. While the PDGA is looking to add electronics to discs, Latitude 64 has finally released an innovative project of their own. The Latitude 64 Missilen is the first disc to be released in the Opto Hex plastic. This plastic is the same blend as your typical Opto plastic, but with little hexagons on the top and underside of the wing that is designed to reduce drag and allow the disc to fly faster.

Here’s the official word from Latitude 64:

Missilen (The Missile, in Swedish) is a project that Latitude 64° has been working on for a while. It features hexagon shaped cavities in the surface of both the top of the disc and the bottom of the rim. This pattern has been tested to be the most efficient in reducing drag and making the disc fly extremely fast. The speed is notable especially when the discs lands. Try it and see for yourself how fast it goes through the wind in your neighborhood.

Dynamic Discs sent us a Missilen to review and while many were doubting the true effects of the hexagon pattern, we believe it does perform as designed. Now, we do disagree with the flight numbers Latitude 64 has given the Missilen (15, 3, 0.5, 4), but overall, the Missilen isn’t a dud. 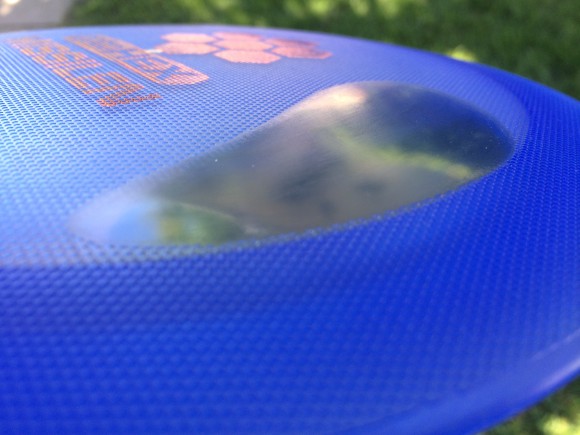 Two things jump out when you first see the Missilen: the size of the rim and the hexagon pattern. The Missilen’s rim measures in a 2.5cm. If you aren’t a fan of super wide rims, this disc will not appeal to you. We say that not only because of the size of the rim, but how you’ll actually have to hold the disc. On the top of the flight plate you’ll find two sections for your thumb that do not have the hexagon pattern on them. We actually thought the thumb grips were almost too far away from the rim. Little did we know we were the ones putting our thumbs too close to the rim — this explains the reason for some early releases. So this was a learning experience for us to. This was confirmed by a handful of people and actually helped us with how to grip the disc.

Because of the reported flight numbers we were expecting a pretty stable flight. In reality, while stable, it isn’t very intimidating. We were graced with a decent headwind on the longest testing session we had with the Missilen. When thrown into a headwind, the Missilen flew on a very straight line and held up with ease. Never once did we feel like the Missilen would turn over and roll into a roller.

The wind calmed down at times which allowed us to get a good feel for what the Missilen could do in calmer conditions. The average arms in our testing group (350-375 foot max) found the Missilen to be stable, but nothing mind blowing. We didn’t see a lot of turn at all from anyone with 350 foot power. A headwind helped things out, but it still remained very stable.

At the end of the flight the fade was strong, but we’ve experienced stronger. It was the type of fade that is strong enough to break the disc out of any anhyzer and will produce a moderate skip if kept low. In reality, it looked like many other high speed distance drivers like a Destroyer, Trespass, Nuke, etc….

The strongest arms in our testing group were actually able to get a little bit of turn out of the Missilen at high speeds. It wasn’t a lot, but it would certainly flip up from a slight hyzer or track to the right a bit when thrown flat. When facing a headwind, they were able to give it a little more hyzer and still have it flip up easily.

The most beautiful throw we saw with the Missilen came into a headwind and released with a little hyzer. It flipped up flat, showed a little movement to the right before a very moderate fade into the wind.

Latitude 64 is calling the Missilen a Speed 15 driver. To us, once you get past the 2.3cm rim size (typically a Speed 13), it is really hard to tell the difference between the speeds. If anything, because of the size of the rim, we’d give the Missilen a 14 rating for Speed. It is faster than a Destroyer, but not by much.

The main idea for the hexagon pattern was to reduce drag and the air moving over the disc. This obviously will hurt glide because glide NEEDS that added air. Does the hexagon pattern deliver on that idea? We think it does. The Missilen doesn’t have a large amount of glide and it shows. To achieve the great distances desired by the Missilen, it really relies on speed and power than on glide. It won’t get up to speed and glide comfortably to its final destination. It just doesn’t waste any time and flies as fast as possible. Now, this is all based on our perceptions while we threw the Missilen. We would love the chance to throw the same disc without the hexagon pattern to see how the flights compare. Regardless, the Missilen will get to its final destination quickly. 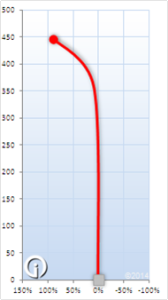 When a new innovation hits any industry there are obviously questions as to how it will perform in real life. Ideas are great, but show me actions. When it comes to the new Opto Hex plastic from Latitude 64, it appears to us that it does perform as designed. With less drag the Missilen relied heavily on speed and power to reach the max distance. It isn’t as stable as we expected, but can still hold up easily in a headwind.

If you’re throwing forehand or backhand, the Missilen should fly nicely for you on the course. The wide rim will turn off some, but others will find comfort in it. Once you get used to the feel of the disc and realize you can throw it as hard as you can and it won’t turn over, the Missilen will grow on you. We’re anxious to see what the Opto Hex technology can do for other molds. Only time will tell.