You are at:Home»Reviews»Midranges»Latitude 64 Mace Review 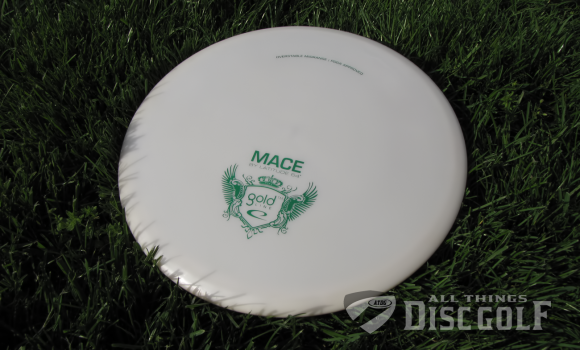 Latitude 64 recently released a new addition to their midrange lineup: the Mace. The Latitude 64 Mace is a stable to overstable midrange with great glide that produces a very nice flight.

Latitude 64 calls the Mace the midrange for the masses:

Being the fifth Latitude 64° mid, the Mace has taken the best of our previous molds to end up as a very solid ”all you need” midrange. The Mace can handle a big arm and also be controlled by players with less power. It will hold a hyzer line, fly reliably straight or work its way back on a long anhyzer drive. One disc challenge? Look no further…

Our viking ancestors never went into battle without their favorite Mace. That mindset is now valid again.

The Latitude 64 Pain, at least on paper, appears to fill a very similar slot. We first expected the Mace to be stable at high speeds and with a slightly stronger fade than the Pain.

All of our tests were done with a 178g Gold Line Mace. As with every other Gold Line disc from Latitude 64, the grip and feel of the plastic was great. It is certainly a disc that you can grip comfortably and trust your throw with it.

Our first throws with the Mace surprised us a little bit. Two things stood out right away: a little high speed turn and very nice glide.

The Mace did turn for us a little bit when thrown at full speed. It certainly didn’t flip but it would start to track right just a touch. When thrown with a small hyzer release the Mace would flip up flat for us. It was a little more understable than we expected, but we would still slot the Mace in the stable category. When thrown into a headwind the Mace wasn’t the strongest wind fighter on the market, but it can hold its own.

The Mace also seemed faster than a Pain. It seemed to come out of the hand a little quicker and carry speed a little better than its Pain cousin. This produced distances at the top of our average distance for other midranges. The Mace is certainly a disc you can get behind and get it down the fairway with ease.

As we previously stated, the glide on the Mace was above average. In comparison, it brought more glide than a Pain, Roc, or Wasp. The glide was certainly noticeable midway through the flight as it would remain in the air a little longer than we expected and carry just a little further than first thought. 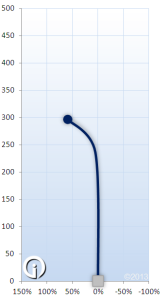 The Mace’s slight high speed turn combined with a high amount of glide will allow the Mace to really produce great distances for a midrange disc. The fade at the end of the flight is strong, yet predictable. It wouldn’t shock us to see the Mace reach longer distances than other midranges in your bag. The Mace could be used on holes where you take little off a fairway driver as well.

The Mace is a nice addition to Latitude 64’s midrange lineup. It brings a little more speed, glide and fade than the Pain. For those looking for a long, controllable, stable midrange, the Mace is worth a look.