You are at:Home»Reviews»Drivers»Latitude 64 Jade Review

The Diamond has been one of the most sold discs of any kind from Latitude 64 simply because it suits both men and women of all ages. When these players have increased their arm speed they have been asking us for a natural step up to something slightly more stable but still easy to use. The Jade will take care of this perfectly!

Dynamic Discs sent us a Jade to review and after a few rounds with it, we were quite impressed with the results. Our Jade weighs in at 150g. While the majority of our testers throw drivers between 170-175g the Jade’s weight didn’t turn us off. For a disc this light, it is surprisingly more stable than we expected. It certainly has turn, but it is very controllable. If we released it at full power and a flat release, it would kick into a moderate turn and hold that angle for the majority of the flight. If you wanted a straighter shot, give it a little hyzer and let it rip. It will flip flat and glide easily down the fairway. We never felt like the Jade was overly flippy for a stronger arm. It has the right amount of turn to really make it a very useful disc.

Now, at the end of the flight the Jade has equally as much if not slightly less fade when compared to its turn. It will break out of a turn and head back towards the center, or if flying flat, will fade left at a moderate pace. It won’t skip away, it won’t carve left that quickly, but it does have a soft finish. Beginners should appreciate the small amount of fade. It is a way to get used to how a disc finishes, but not to the extent where you’ll get frustrated.

The speed of the Jade is exactly where it should be for someone looking to get into drivers. It is a step above the speed 6-7 range, but doesn’t quite hit that speed 10 level. You still feel like your throwing a driver, but you aren’t throwing a warp speed disc either. For weaker arms, you’ll find it very comfortable. Heck, even power throwers will find some comfort with it. 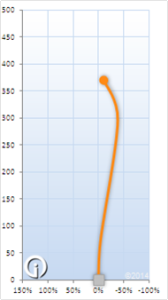 To help it carry some distance the Jade does have some added glide to really keep it moving. Again, this will help translate to some great distance.

Overall, we’d rate the Jade at 8, 5, -1.5 to 2, 1.5. You’ll see the speed of a faster fairway driver with nice glide to help gain some distance. It does have some turn, which will vary among arm strengths, but not enough to make it too flippy. The fade is very comparable to the amount of turn you’ll see.

The flight chart from inbounds Disc Golf shows this flight we were experiencing. The turn will kick in, carry down the fairway, before finishing with a light fade.

Overall, were pretty impressed with the Jade. The Jade truly is a great disc for beginners and golfers with weaker arms. You’ll be able to really put some power into it and see some nice flights you’ve been wanting with a driver. Don’t be fooled though. The Jade isn’t just a disc that beginners could learn to love. We could see stronger throwers loving the neutral flight of this lightweight disc. On more than one occasion heads turned when they saw what kind of distance the Jade brought.

If you’re trying to get someone into the sport, the Jade is worth a look to help him/her fall in love with the sport.