You are at:Home»Reviews»Putters»Latitude 64 Gauntlet Review

One of the best things in disc golf is the variety of putters available to you. You can name nearly any combination of stability, speed, glide, and overall feel and you’ll find at least something close to what you’re desiring. We’re lucky enough to get the chance to try out nearly every new putter on the market. After reviewing these putters, the majority of them fall into a “yeah, thats a nice putter” category. It does what we expected and provides solid results. Other putters rise to a level of “wow, that’s impressive.” That’s the case for the Latitude 64 Gauntlet.

The Latitude 64 Gauntlet has a familiar feel and comfortable grip with a nice combination of stability and glide. Latitude 64 says this about their latest putter:

Are you searching for a reliable putter with stable flight? Then it is time to challenge the course with the Gauntlet.

It is a high profile putt and approach disc with a beaded rim. A stable flyer with good glide makes it a handy weapon in every bag.  It is similar to the Macana but with less rounded lower rim.

Latitude 64 sent us a Gauntlet for this review and we’ve spent some time with it both inside the circle and out on the course to see how it stacks up.

When we first picked it up, we could feel a little added depth to it, but not to the level of the Latitude 64 Dagger. The Dagger really fills out the hand and feels bigger than it really is. The Gauntlet certainly isn’t shallow and is a shape that most should feel comfortable with. It didn’t take long to find a comfortable grip for both putting and driving. Most of the people in our testing group use Innova Aviars of some sort for their everyday rounds. All of the Aviar users found it easy to transition to the Gauntlet for these tests. You could also say the Gauntlet has a feel of a deeper Dynamic Discs Judge.

Two flight features stood out the most during our tests with the Gauntlet. The first was the glide. Latitude 64 puts the glide rating at a 5, which we think its a touch high, but it isn’t too far off. On drives and approaches we clearly saw the glide kick in. It would get up to speed and have a little extra gear to get moving. It was a welcome feature on drives since we welcomed the disc doing some added work to gain that added distance. When used for approach shots, it took a little getting used to since we didn’t want it to glide out too far for us. It took some small adjustments, but over time we were able to dial it in.

You’ll also notice the high speed stability. We never saw any turn when thrown flat or with hyzer. It will hold the initial line you put it on regardless of how much power you put behind it. This translated to a lot of confidence off the tee since we didn’t have to fear of having it turn on us. Even on approach shots, you won’t have to worry about it doing anything too crazy. Start it on the line you want it on and let the disc do the work.

With the high speed stability certainly there, the end of the flight is relatively mellow. We saw a hint of fade at the end of the flight, but it never did anything too dramatic. It would finish to the left of center for us, but not by much. Because of this, with when combined with the above average glide, you actually have quite a bit of control. If it had more fade, then you have the two factors of fade and glide that could take the disc further left or further forward than you would expect. Yes, it could still glide a little further than expected, but you don’t have to account for a big fade.

Inside the circle the Gauntlet prefers something straight at the chains. The fade isn’t strong enough to allow it to really dump into the chains. You have to go for the heart of the chains yourself. Also, with the the glide, it won’t drop in too quickly either. Sure, it will naturally drop a bit, but don’t expect a lot of sudden movement. 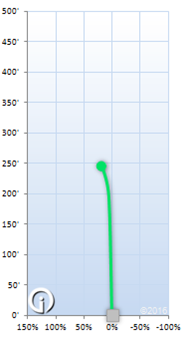 The flight chart inbounds Disc Golf shows a flight very similar to what we experienced. A flight with high speed stability and a little added distance thanks to the glide.

The Latitude 64 Gauntlet looks to fit into that “everyday putter” category. It isn’t a utility style disc and it isn’t dramatically over or understable. It is one you can reach for time and time again. The overall feel is one that fits into a sweetspot and the flight is hard to dislike. It shouldn’t matter your putting style, the Gauntlet should be pleasing for virtually everyone.

As the weather warms up and the disc golf season gets underway, if you’ve been thinking of a new putter, the Latitude 64 Gauntlet could be what you’re looking for.