You are at:Home»Reviews»Putters»Latitude 64 Dagger Review

Putters. There are many different options available and each and every one is considered “the best putter” to at least one person out there. After making the switch to Latitude 64 from Innova, disc golf professional Dave Feldberg was wanting to replace his trusty Aviars. Feldberg worked with Latitude 64 to develop their new Latitude 64 Dagger putter. This big bead putter has quite the profile and has satisfied the needs and wants from the former World Champion.

Latitude 64 has this to say about the Dagger:

The Dagger has been developed in co-operation with Dave Feldberg and is a deep dish beaded putter. Feldberg says it is comparable to a big bead Aviar, Wizard, Challenger, etc., but deeper with more float.

Dynamic Discs sent us a set of Daggers for us to review. Feldberg has talked about how he wanted the Dagger to fill your entire hand. He didn’t want a gap between the hand and the disc. With the first time you pick up the Dagger you instantly realize exactly what he was talking about. The Dagger really does feel big in the hand — “fat” is almost a better term than “big” when it comes to this disc. We’ve never used a disc quite this deep and with such a fat feel. It took a little getting used to, but after a set of throws and putts the feeling wasn’t as shocking.

We started our tests off the tee before we moved into the circle. Due to the very deep shape of the Dagger, we’d be inclined to say that it might not be the best driving putter just because of how much disc you’re holding. It isn’t a dud off the tee, but might not be the best performing putter as a driver. Since the Dagger is so deep, even a fan grip has your fingers extended quite a bit as is and takes away from some of the power you can generate.

Even with that said, the Dagger was a very stable flier. Don’t expect much turn at all from the Dagger when thrown. It would hold the angle of release we threw it on and even would break out of a slight anhyzer. While it wasn’t our favorite off the tee, for approach shots it performed quite well. Due to the stable flight, moderate fade, and a nice amount of glide, the Dagger was very controllable on shots from around 100-150 feet. It proved useful for small little hyzer approaches or even runs right toward the basket. We had no worries of it turning off of our line and the glide helped keep things aloft.

Inside the circle the Dagger performed as anticipated. We could get a very predictable flight out of the Dagger with just a touch of fade at the end. Both spin and pitch/push putters will be able to use the Dagger easily. Pick your point on the basket and let one rip for the chains. While Latitude 64 rates the Dagger’s glide at a 4, we don’t think it is quite that high. It certainly will glide, but it seemed very similar to other traditional putters available. 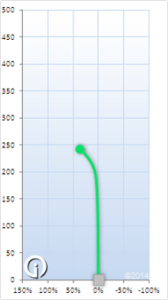 The flight chart from inbounds Disc Golf shows this very straight flight we were experiencing. We could argue we saw a touch less fade in our test though.

If Dave Feldberg wanted a putter to fill out his entire hand, he got it. The thing that will take the most getting used to is the overall size. It could almost feel too big at first, but you’ll adjust to it. For those who are fans of the Latitude 64, Dynamic Discs, and Westside Discs line and their base plastic blends and have struggled to find that traditional putter feel, the Dagger is the ticket. With a stable flight, deep feel, and nice glide, the Dagger could be the solution to many putting woes around the world.