You are at:Home»Reviews»Drivers»Latitude 64 Culverin Review

There are some disc golf discs that are designed for beginners or those with an average skill level. Other discs are designed for the professional level. In between, you’ll find a set of discs that can be useful to disc golfers of any skill level. These often bring a little added speed to help with distance, a little stability to handle power, but enough control to appeal to a wide audience. That is the case with the Latitude 64 Culverin.

Described as an “overstable control driver,” the Culverin quickly appealed to various skill levels during our tests. Latitude 64 says this about their new driver:

Have a blast with this overstable control driver. For the advanced player, the first part of the flight will be straight and it will finish with a dependable fade. Culverin will be the perfect choice for long s-curves when you want to finish with a strong fade.

Latitude 64 sent us the Culverin for this review and we’ve had some time with it in various conditions to see how it stacks up.

The Culverin certainly is a little faster than a fairway driver, but it doesn’t quite reach that wide-rimmed high-speed driver level. This helps with the broad appeal.

Typically, we don’t talk about disc speed ratings right away, but it is worth it here. Latitude 64 gives the Culverin a speed rating of 9 and we’d have to agree with this. We find the Speed 9-10 range the sweet spot for most who are looking for a distance driver they can handle. Anything faster and you’ll need a little more arm speed and you could be sacrificing control.

We could easily get the Culverin up to speed which is a big factor in any disc you throw. It needs to be at this max speed in order to gain the optimal flight. Slower arm speeds could still get it up to a level where you’d see a desired flight and faster arms found a disc that had enough stability to handle the power behind it.

As the Culverin moved down the fairway, we also noticed a nice combination of high and low speed stability. At the start of the flight, you can really trust the Culverin. Average arms saw virtually no turn, while the strongest arms saw just a hair of movement. This soon became a disc that you can reach for and just rip down the fairway. You don’t have to give it room to shape a flight. If it has the space, throw it with confidence and it can hold up to whatever you give it.

In order to have complete trust in a disc like the Culverin, you also need to have a reliable fade. The Culverin will finish left with a little bit of force and can actually help carry some distance due to some nice glide. The glide helps it hang in the air a little longer than normal and allows the fade to finish completely. It won’t knife in too hard, but it does have a relatively strong finish to it.

Hyzer shots are right in the wheelhouse of the Culverin due to the stability combination. When thrown with a little anhyzer, we’d see it flex out over the course of the flight before fading out. Big turnover shots likely won’t be your first choice with the Culverin, but anything that you need to fly straight with a little finish to the left can easily be done.

From feel to flight and everything in between, something felt familiar during our tests. Throughout our entire testing we knew the disc that was most like the Culverin. This is as close as we’ve seen to the popular Discmania PD. Other discs are close, but this is the closest we’ve seen to a PD clone. The overall feel of the Culverin is very similar to the PD, but does have a different style flight plate. Everything else will feel very familiar.

The PD is one of those discs that people often find “other versions of.” This also includes the Innova Teebird, Discraft Buzzz, etc…. These are popular discs from other companies and those who love Latitude 64 would love to find their own version of the PD. The Culverin checks that box. 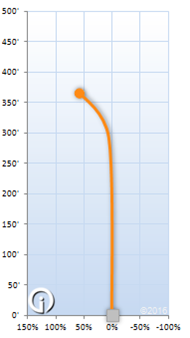 The flight chart from inbounds Disc Golf shows a flight close to what we saw on the course with the Culverin. A nice straight flight to lead things off before a moderate-to-strong fade at the end.

You can put some trust in the Culverin. This can easily be a disc you reach for again and again when you’re looking for some added distance, but still want the control.

If you find very high speed drivers to be too much and want you still have a driver in your bag, the Culverin could do the trick. Slower arms will welcome the smaller rim while stronger arms can rely on the high speed stability to handle the power they can put behind it.