You are at:Home»Reviews»Midranges»Latitude 64 Compass Review

Over the last few years, we’ve seen a growing number of discs that have been designed with input from a professional disc golfer. This pro is searching for something very specific in their bag with their feedback, they can basically create not only a signature disc for themselves, but more of a custom disc for their needs.

That’s the case with the Latitude 64 Compass. The Compass was designed with Ricky Wysocki in tow and in the end Latitude 64 produced a disc worthy of Wysocki’s name. This is what Latitude 64 and Wysocki have to say about their new midrange:

Navigate your way on the fairway with this midrange from Latitude 64. This straight flyer will go wherever you want. It holds any line in the most predictable way. Not thin, not deep so this disc will fit in any hand. This stable and versatile midrange has been developed in cooperation with world class player Ricky Wysocki: “The Compass will make me more confident on the course. Hyzer, straight, anhyzer; I can trust it on every angle”.

Latitude 64 sent us a Compass in Opto plastic for this review. While we wanted to see how it stood on its own, we also had a few readers reach out to us to ask us to specifically compare it to the Latitude 64 Claymore.

When we first picked up the Compass we felt very comfortable with the initial grip. The Compass isn’t going to turn heads with some sort of unique grip or some sort of gimmick. It has a very traditional midrange feel and we can’t knock it for that. The mids you carry in your bag need to have a feel you can be comfortable with all the time. Plus, if you don’t have a grip you can trust, you lose accuracy and trust in the disc.

We typically used a fork grip or modified fan grip with our mids and we felt right at home with the Compass. Along with the moderately sized rim, there is just a hint of dome from edge to edge. We’ve certainly seen midrange with more dome, but we can’t call this board flat either. In our opinion, it does find a nice balance to provide a somewhat low profile, but that slight dome does bring a little added glide which really shows when it flies down the fairway.

Knowing the Compass was designed for virtually shot, we initially wanted to see if it could pull off one of the tougher shots for a midrange: dead straight.

With our first few throws we noticed quite a few flight characteristics. The first was the high speed stability. It is strong enough to be given a 0 rating for turn, but we can’t say it is the strongest 0 rating. There wasn’t turn, but we could tell it wasn’t a major wind fighter. Part of that is due in part to the very soft fade. For some midranges that have a stronger fade, that turn rating can seem like a stronger 0 since it is wanting to push left once it powers down. That wasn’t the case with the Compass, but you can have confidence to throw it hard and not have it turn on you.

When we turned around and threw the Compass into a pretty decent wind, the results were better than expected, but still not at the top of our list. The Compass did turn when faced with the headwind, but never flipped over. It fought it to a point and then faded very softly back to center. It wouldn’t be our first choice in the wind, but if you do catch a rogue gust of wind, you might be ok.

The fade of the Compass is very soft and does complete the desire for that dead straight shot. It will finish left of center, but not by a very large margin. It didn’t take us long to find the best line to the basket with the Compass is to go directly at it. The flight isn’t dramatic and that is a welcome sight for many. For a midrange designed to be one your each for time and again, you need a flight like this. Plus, we’d imagine after a number of rounds we’d see a little turn come into the Compass and that fade start to leave.

The Compass will react nicely to a hyzer line, but don’t expect too much from it. We were able to drop the wing and give it quite a bit of hyzer on a big drive and it would ride the angle from start to finish. The end result was a throw that finished straight ahead of us while taking a sweeping line to get there. Most importantly though, you have to give it hyzer to pull this shot off. If you go for a big sweeping shot and release it flat, it won’t have enough energy behind it to fade hard enough.

When faced with a shot that calls for a little anhyzer, this is another case where you can control the angle yourself and help guide the Compass where you want to put it. You’ll need to start it out with a little added height and a little left of center, but turn over on it a little bit and let the Compass do the rest.

You’ll find the Compass holding that line for virtually the entire flight. We saw it flatten out toward the end, but it still finished to the right. The fade wasn’t strong enough to break it out of that turn and fade back left, but for a controlled anhyzer shot, it is nearly ideal.

As for the comparison to the Latitude 64 Claymore, they are very similar. We found the Claymore to have some turn and a small fade. We can confidently say the Claymore is less stable than the Compass. The end results are very close to being identical, but they take a slightly different way of getting there. We could also say the Compass is a hair faster, but with the same amount of glide.

The Compass will have a slightly fuller feel in the hand due to that slight dome when compared to the Claymore. If you like a flatter midrange, the Claymore might be more appealing. If you’re looking for a little more high speed stability out of the box, the Compass is the choice. Best of all, you have options. 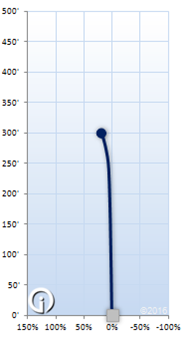 The flight chart from inbounds Disc Golf shows a flight very similar to what we saw. Nice and straight at high speeds followed by just a little bit of movement to the left at the end of the flight.

We know disc golfers everywhere who are very picky when it comes to their putters. Everything has to feel right. We could argue the next most important disc in your bag is a midrange you can trust time and time again. Not only does it need to feel right, but it has to fly right too.

The Latitude 64 Compass tries to find the sweet spot on those that like a domey midrange and a flat midrange. It sits right in between the two. With a beadless bottom and familiar feel, the Compass can easily become a go-to midrange. Control your release angle and the Compass can truly take you where you want to go.