You are at:Home»Tournaments»Koling, Pierce win at the Maple Hill Open 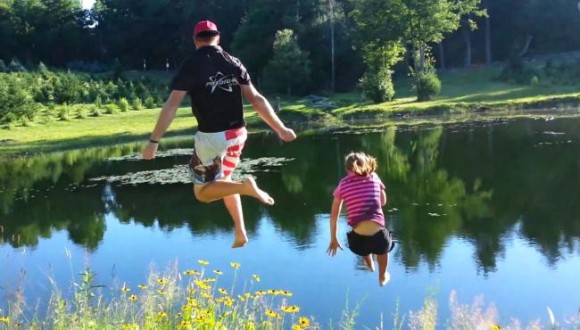 What better way to spend a long holiday weekend than playing or watching disc golf at one of the most exciting National Tour events–The Vibram Presents the Maple Hill Open. Professional disc golfers from all over the country ventured to Leicester, Massachusetts to take part in the nearly week long extravaganza that is the Maple Hill Open. With an ice cream social, speed chess, ping pong battles, putting games, and driving and accuracy contests, there was plenty going on to entertain the 170 players and countless fans. Let’s not forget about the most important part of the four day event, though. Over the course of the event, 145 men and a Maple Hill Open record 25 women competed on Maple Hill’s gold course, one of the most gruelingly difficult yet beautiful courses in the entire world. In the end, Prodigy-sponsored pros, Jeremy Koling (#33705) and Paige Pierce (#29190), would take first place in their respective divisions and do the honors of jumping into the famed pond on Maple Hill’s first hole.

The biggest adversary for the pros to grapple with was the ever-changing New England weather. On more than one occasion, spectators could hear disc golfers and volunteers alike comment on the fact that the competitors experienced the full gamut of weather possibilities. On Day One, blistering heat and humidity afflicted each and every participant. Day Two brought torrential downpours (yet somehow low winds) for all but the earliest of cards. Day Three is when the wind picked up and gusts reached Kansas City Wide Open speeds. Day Four, championship Sunday, was widely considered the nicest of all in spite of inconsistent winds and somewhat high temperatures. In spite of it all, Koling and Pierce reigned victorious on Sunday afternoon.

Last year, the disc golf world bore witness to Paul McBeth tearing through Maple Hill gold’s on his way to a National Tour victory. This year’s Maple Hill Open showcased almost the exact opposite of wire-to-wire domination. We often talk about “moving day” during disc golf tournaments, but it seemed like every day was moving day at the 2014 Maple Hill Open. Each day highlighted a nearly completely revamped lead card as competitors’ fortunes changed almost as much as the weather conditions. Jeremy Koling may not have spent the first two days on the lead card, but he certainly held his ground and proved himself worthy of his first career National Tour victory during rounds three and four.

No one came out during round one and challenged McBeth’s course record, but many of the pros got out to strong starts, shooting under this year’s course part of 60, but never falling below 50. It was clear that Day One would not be able to create enough separation for any competitor, but Koling sat just 6 strokes off the lead after a 1034-rated 57. There were plenty of people standing between him and first place, including Day Two’s eventual lead card of Dutch Napier, Cale Leiviska, Dave Feldberg, and Dana Vicich.

If we were forced to label a specific moving day at the 2014 Maple Hill Open, it would probably have to be The Fourth of July, round two. The rain was coming down in buckets by the time the early afternoon Men’s groups went out, but that didn’t stop some players from making up some serious ground on the field. While many competitors struggled to shoot under par, Jeremy Koling managed to improve upon his Day One performance by one stroke in order to solidify a place on Saturday’s lead card with Dave Feldberg, Steve Brinster, and Devin Frederick who shot an incredible 1082-rated 52. 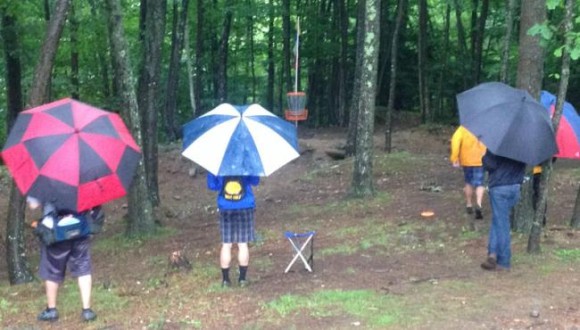 We say it all the time, but consistency is the key to any successful disc golf performance and Jeremy Koling truly exemplified the idea. One of just two competitors during the entire weekend to maintain his position on the lead card for more than one day, Koling continued his impressive play on Saturday. Beautifully shifting between conservative and aggressive play, Koling was able to shoot another 3-under 57 to put himself at 10-under for the tournament and in sole possession of first place. Perhaps Saturday should have been called moving day, though. Ricky Wysocki struggled in the rain on Friday, but absolutely dominated in round three’s wind, shooting the hot round of 52 and placing himself just one stroke behind fellow Prodigy player, Jeremy Koling. It seemed like Wysocki would be able to ride his momentum to yet another major victory, but Koling had other plans.

Championship Sunday showcased yet another new lead card, but the battle between Wysocki and Koling would prove to be the real story. The disc golf world is lucky enough to have Marty McGee’s (McFlySoHigh) coverage of the showdown, and when you see Ricky Wysocki nail a near 200ft shot on hole 9 to save par, it may seem as if it would be impossible for Koling to hold him off. Well, let’s fast forward to the final hole and the famed 18th green at Maple Hill. 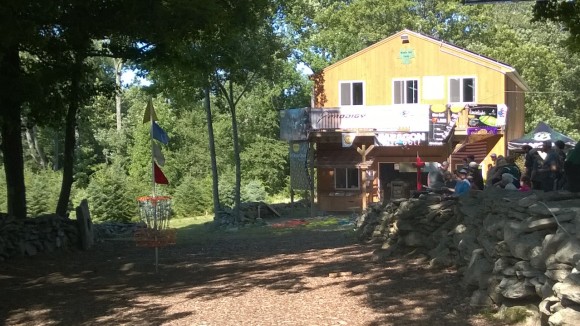 Heading into hole 18, Wysocki had finally overtaken Koling for a one stroke lead. As many of the competitors will tell you, there are no breaks on Maple Hill gold’s, so Wysocki still had one job left to do. Think back to the 2012 Vibram Open for a moment. Wysocki led would-be champion Cale Leiviska heading into hole 18, but some trouble with the technical out-of-bounds on the green gave Leiviska the window he needed to take the victory. Fast forward back to 2014, and history would repeat itself.

After two solid drives from both Koling and Wysocki, each competitor had no choice but to play aggressive and try to hit the green for the easy birdie (3). Koling nailed his approach and had done all he could do to give himself a chance at the victory he had played so consistently for all weekend. Wysocki stepped up and threw a familiar forehand safe onto the green. The crowd roared as it often does for those who land safely on the 18th green. But then all went sour and the cheers turned to moans, groans, and sighs. Ricky’s forehand shot skipped up into the rock wall surrounding the putting green only to stand up and roll back out-of-bounds. He failed to hit his putt from the drop zone to force a playoff, leaving Koling to tap in his birdie.

One of just a handful of players to make it through the 2014 Maple Hill Open without a round over par, Koling put on an absolute show to hold off his teammate, Ricky Wysocki. Almost in disbelief, Koling tapped in and accepted his first National Tour victory. Fellow champion Paige Pierce stormed the green for a huge congratulatory hug as the Doubles World Champions shared an exciting career moment. Koling had a bumpy road to his victory, but Pierce was able to separate herself a bit more.

We have just completed the fifth of eight National Tour stops and four of them belong to Paige Pierce this year. Looking to ride the momentum of her victories at The Memorial Championship, the Texas States Championships, and (more recently) the Kansas City Wide Open, Pierce set out to capture her first career win at Maple Hill.

Much like Jeremy Koling, Paige Pierce did not enjoy a wire-to-wire victory; but she was close. On Day One, no one was able to stop 2013 Vibram Open champion, Valarie Jenkins as she shot the only sub-60 and 1000-rated round of the weekend, a 2-under 58. Pierce fell to six strokes off the lead, but made a serious move in Friday’s soaking wet round.

Pierce followed up on her first round 64 with a 65, tying Sarah Hokom for the hot round and catapulting herself into first place by a narrow margin. Aside from her and Hokom, each competitor failed to shoot under 70 and you know that when you open a door like that for Paige Pierce, she’s going to take full advantage. Like her doubles partner and fellow champion, Pierce was able to maintain a consistent level of play in order to put serious pressure on her competitors.

In round three, Pierce was able to show why she has been dominating the 2014 National Tour. Paige took to the course and dominated in the wind as if it wasn’t even there. She shot the hot round of 61, building her lead over Catrina Allen to five strokes heading into the final round. We’ve seen major shifts in leads during final rounds in the past, but Paige would not be denied her first win at Maple Hill. 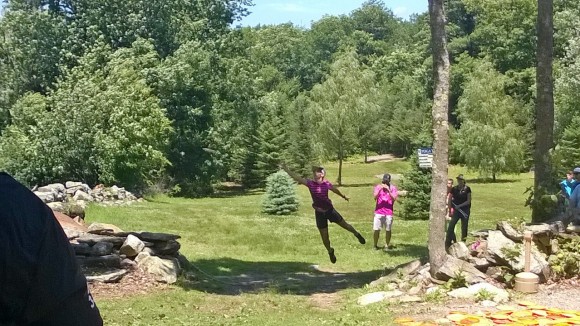 Although multiple competitors were able to finish with a better final round score, Paige was able to comfortably finish her round by safely laying up for a par 4 on hole 18. In the end, Pierce rode her consistency in all weather conditions to yet another victory and was able to celebrate with Jeremy Koling by jumping into the pond on hole one.

Can you believe it’s already July and we’re more than half way through disc golf’s National Tour? It seems like just yesterday we were gearing up for the Memorial Championships. After witnessing two National Tour stops in three weeks, we now have to wait until August 1-3 for the next NT event, the Fort Steilacoom Open. For now, though, the disc golf pros have a week off before many of them head overseas for the European Masters, the next PDGA major. We may be well into summer, but there’s still a lot more professional disc golf to be played!