You are at:Home»Reviews»Midranges»Kastaplast Kaxe Review

This past winter we saw the release of one of the most unique discs available. The Kastaplast Rask has a very unique design with it’s innovative edge on the bottom of the flight plate that is designed to reduce drag. The Rask was met with mixed emotions for many due to the unique design and very overstable flight. This summer, Kastaplast has released their second mold and after testing it, we feel it might become quite popular. The Kastplast Kaxe is a small diameter midrange with a nice stable flight.

Kastplast has this to say about their second release:

With decent stability and slim proportions this disc will come in handy in numerous situations on the course. Made in our popular high end plastic – tacky and super durable. Kaxe is an old Swedish word, meaning a stuck-up or cocky person.

Kastaplast sent us a Kaxe to review and we have to say we were quite impressed with the results. One of the first things you’ll notice in the Kaxe is the look and feel. You’ll want to think that it is actually a fairway driver with how the wing is shaped. Think of the Kaxe like a slightly fast midrange. The speed never quite reaches fairway territory, but the results will still be a welcome sight.

The plastic blend, which is quite nice, is the same as what the Rask is produced in. The Kaxe all came in a translucent blend, but had a great combination of grip and durability. After throwing the Kaxe, we were anxious to see another mold in this plastic and it really does perform well.

The Kaxe has a small micro bead on the bottom of the rim and a very moderate shoulder before a flat top. When you combine the shape of the wing and the smaller diameter, it will almost feel like a fairway/midrange combination too. This smaller diameter provides a lot of room to hang onto the disc. Some could find a power grip comfortable on the Kaxe, but for us a fan grip or fork grip was our pick of the litter.

With our first throws we were a little taken back by how stable the Kaxe was at high speeds. We could really put some power behind it and the Kaxe would not turn over. Even the strongest arms in our testing group we seeing this stable flight. When facing a headwind the Kaxe would hold up with ease and would continue on your desired line.

As the Kaxe would power down, we started to see a somewhat unique fade. The Kaxe has a nice amount of glide which helps it stay in the air. The fade isn’t a very hard-cutting fade like an Innova Gator or Discraft Drone, for example. The Kaxe would begin to track to the left, but hold a forward trajectory as the flight starts to end. As the Kaxe would lose more speed, this fade would get just a touch stronger. The really hard fade comes in late, but it doesn’t carry that far though. You can trust it will finish to the left and it will end on a straighter line than you’d initially expect, especially with how stable it was at high speeds.

There were two holes where we really saw the true flight of the Kaxe for the first time. The first came on about a 340 foot hole. One of the strongest arms in our group took a hold of the Kaxe and gave it a flat throw down the right side of the fairway. The hole has OB to the right and has plenty of room to carry down the side of the fairway before finishing to the left. The Kaxe’s glide really kicked in as it held this straight path all the way down the fairway. As it got to the end of the fairway, the fade began to take the Kaxe to the left. At first, it looked like this would be parked, but the Kaxe remained aloft and soon the fade would send the Kaxe a little further to the left than we first thought.

The second hole was a little shorter and one of our testers with about 350-foot power grabbed the Kaxe for this shot. The shot calls for a low ceiling to be cleared and for a moderate finish to the left and you should be parked. The Kaxe came out with a little bit of hyzer down the far right side of the fairway. It would hold this slight hyzer angle for the entire flight. Never once did it want to flip up and fly flat. This flight angle resulted in a small sweeping hyzer across the fairway. The Kaxe was kept low and produced a small skip when it hit the ground. We ended up about 25 feet past the pin. While we’ve seen this hole parked many times, you can’t get much more textbook than that flight with the Kaxe. 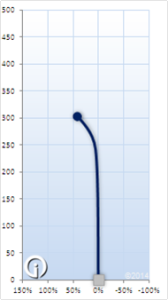 Overall, we’d rate the Kastaplast Kaxe at 5.5, 4.75, 0, 2.5. It has a lot of speed for a midrange and a very nice amount of glide which produces some nice distances with great control. Don’t expect a lot of turn from the Kaxe, it will remain stable. The fade is noticeable, but isn’t mind blowing. It is a nice combination.

The flight chart from inbounds Disc Golf shows nearly the same flight we were experiencing. Very stable at high speeds with no turn followed by moderate fade at the end.

The Kaxe is a little tough to compare to other discs. It is on the faster end of the midrange spectrum and the glide certainly helps the distance. It is slightly faster and has more glide than a Innova Roc3 or Dynamic Discs Truth. It doesn’t have the fade of the Dynamic Discs Verdict though. It isn’t as strong, but it does glide more than the Verdict.

It can carve a spot into your bag though. If you’re ever caught between a fairway driver or a midrange, the Kaxe might be the disc. You can trust it won’t turn over on you, but also trust that it won’t fade away either.

If you weren’t a fan of the Kastaplast Rask, don’t overlook the Kaxe. With it’s small diameter size, stable flight, and above average glide, the Kaxe could be a disc you reach for more often than not.