You are at:Home»Reviews»Putters»Kastaplast Berg Review

After releasing the Rask distance driver and Kaxe and Kaxe Z midranges, Kastaplast has slowed things way down and turned their focus to the new Berg putter. The Kastaplast Berg is a slow putter with very little glide and a very straight flight.

Kastaplast says this about their fourth release:

The Berg can be trusted not to hover far passed the basket even on windy days. What characterizes Berg when thrown off tee is its good high speed stability, without a very hard fade,  a combination that makes this disc easy to shape various lines with.

Berg features an ergonomic grip. The thumb track on Berg was designed to be prominent on the top side while not being noticeable at the bottom, which makes it feel very different from any other putter. Feel the Berg-difference and go for the chains!

Kastaplast sent us some Bergs to review and it quickly became a popular approach disc for us.

The Berg has a Thumbtrakesqe design that is similar to what you’d find on Innova Rhyno. It isn’t 100% identical though as the Berg’s top rim is very rounded and has a smooth contour  that blends in with the flight plate. When you combine this with the very rounded nose, it is a very comfortable grip. It almost as the feel of a catch disc than a disc golf putter.

Two things will stand out about the flight of the Berg: little to no glide and a very straight flight. Off the tee the Berg might not be the best choice because it just doesn’t want to fly very fast nor very far. As an approach disc though, it is hard to beat.

In our recent review of the Innova Wombat we mentioned how it was a great choice off the tee due to the added glide and you could make it work on some longer approach shots. The opposite of that is true for the Berg, but that isn’t a negative. The Wombat has the ability to easily glide past the basket. The Berg on the other hand will go as far as you throw it and not much beyond that. We found ourselves sitting at about 150 feet and in on many holes and reached for the Berg as our approach disc. Due to the lack of gilde we were able to put in a forceful throw and trust the disc to do the work.

We joked during our reviews that if you have an 80 foot shot you need to throw the berg with 90 feet of power. The lack of glide was very useful, especially in the wind. On one hole we had about a 80 foot approach with a decent headwind in front of us. A few Aviars, a P2, Warden, and a few others were stable enough to fight the wind, but their glide helped keep it in the air and we found ourselves flying past the basket. The headwind kept the disc aloft even when we took a little power off of the discs. The Berg, with that lack of glide, flew on a confident line and just dropped at the end of the flight. This happened time and time again. Even as Kastaplast said, it really won’t gilde past the basket.

In terms of overall flight, you’ll get a pretty straight flight out of the box which should remain due to a very durable plastic. The Berg was pretty stable at high speeds and didn’t really show any signs of turn when thrown at full power. This really helped the accuracy since we already knew it wasn’t going to glide out on us.

The end of the Berg’s flight has a hint of fade, but there isn’t a lot of movement at all. Since it won’t glide out and it heads to the ground quickly, there just isn’t enough time for it to really make a big fade. You can really go right at the basket with confidence knowing it won’t go too far and won’t finish too far left.

If you’re looking to use the Berg as a putter inside the circle, it is one of those putters you can aim right at the chains with. The flight plate has a little flex so if you like a stiffer putter it might be a little hard to adjust, but there isn’t much to dislike. Spin putters can really hit some strong putts with it. 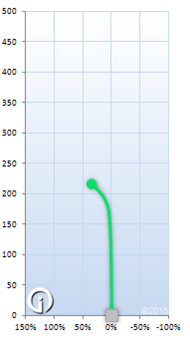 The flight chart from inbounds Disc Golf shows a flight closer to the numbers that Kastaplast gives the Berg, but the distances and high speed stability are certainly the same.

The Kastaplast Berg isn’t going to hit some massive distances for a putter, but it will be very accurate. The Berg will come in handy when a drive falls a bit short and you need an accurate approach over a long putt. It doesn’t hurt to take that three and save par instead of running it and risking a bogey.

The rounded nose and groove for your thumb provides a very comfortable grip and almost the feel of a catch disc. Heck, the Berg would be a great warm up disc too.

The Berg is another strong release from Kastaplast. Even amongst the big boys, these guys can produce a quality disc with great results.