You are at:Home»Tournaments»That Just Happened: A look back at the Japan Open

But before you do, let’s discuss “What makes a disc golf tournament great?” Is it the challenge of the courses or the format of the tournament? Is it the setting or location? Perhaps it’s just the player’s pack – the freebies – or the focus on hospitality that makes the event stand out. A good argument could be made that what makes one tournament great is the fact that so many other tournaments around it fall short of being considered simply “decent.”

Whatever formula you use to determine greatness in disc golf, the list of candidates for “greatest tournament experience of all-time” is relatively short. USDGC is a consistent list topper. I’m talking about the original formula for USDGC, not the “everyone gets a participation ribbon” version. Other great candidates: The European Open, The Vibram, and Worlds” are always safe choices – especially if you win. But even if you don’t, Worlds can be a lot of fun because it’s great to be around a large disc golf family for a full week. It has the feel of a big family reunion complete with all the drama and joy you would expect when a large family gets together.

This past week, I figuratively and literally went to the mountaintop to witness firsthand disc golf tournament greatness. 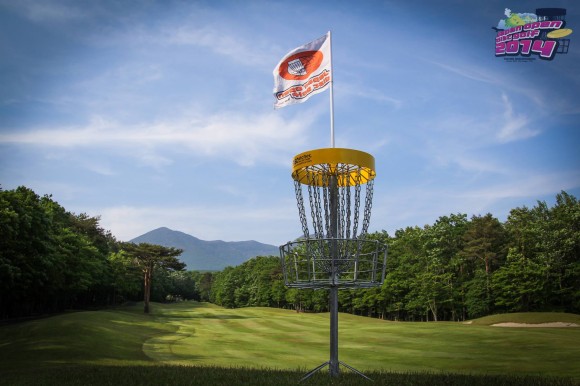 It takes a full day of flights followed by a four-hour bus or train ride to get up to the Pure Towa Cottages in the foothills of Mt Nasu in northern Japan. Before you even get off the bus, you are greeted by a crowd of well-wishing staff, competitors and locals who run along side the bus, waving flags and singing to you as the bus pulls into the parking lot to welcome you.

Everyone shares a cottage with four others. Each cottage has a small kitchenette, which you shouldn’t need. A toilet room with a heated seat and built-in optional bidet. A shower room with optional bathtub too small to sit down in. There are two bedrooms with beds, which are small and firm. The blanket is heavy and being cold is impossible. After such a long trip, you don’t care. You just want a hot shower to clean off the crust of travel followed by a year of sleep.

The sun rises at 4 AM, most of the competitors are still up partying, but a few older souls are waking up with the sun and starting their day. There is always a thick fog in the air in the morning and moisture on the ground. In the midst, walking around the cottages, there are a few brave mountain monkeys. They avoid humans if they can. In fact, most of the competitors said they never saw one during their trip. If they wanted to, they only needed to walk down by the practice course, that’s where the monkeys liked to hang out.

Breakfast starts at 6 AM and is a buffet of American dishes with a small selection of Japanese items; raw fish, exotic fruits – the best tasting pineapple I’ve ever had – eggs, rice and fresh vegetables. It’s easy to eat too much but it’s smart to eat wisely.

The buses leave for the course at 7 AM. It takes about five minutes for the buses to travel the narrow mountain roads to arrive at the Nasu Golf Club. If the fog lifts just a bit, you could see for miles down the side of Mt. Nasu. Large swaths of dense, green rain forest which seems painted on the side of the mountain.

The clubhouse is a modern castle made of tan stones. Inside is a pro shop and the central nervous system of the tournament. To play the course you must have your discs individually weighed to make sure they’re legal for use. Nothing above 159.9 grams. Lots of players who thought their discs were safe were shocked to discover that a “go to” disc was too heavy.

The castle is two stories. The top floor is lined with windows so you can see down the side of the mountain. The lower floor is a staging area, locker rooms and the exit to the golf carts. Here is where you load up on water, warm coffee, and bug spray. You need bug spray in this part of the world. The bugs here eat you alive and the welts they leave are about the size of a quarter and they make your skin swell up like a bee sting. The itch is horrible.

There are two courses; a purple course on the mountain side above the clubhouse, and a blue course below the club house. The purple course is easier but has a few beautiful holes which I wish existed in my backyard. The blue course is longer and more open. There are a few amazing holes but the blue course is more about the views off the mountain and less about hole dynamics. Both courses stress basket placements with cart path OBs, bunker OBs and super slick greens. It’s so incredibly easy to go OB here you might as well plan on it being a part of your game. 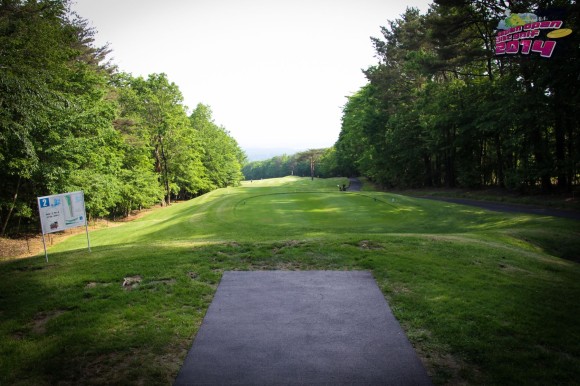 You need the most stable discs you can handle. For me it was a Firebird and a stable Blizzard Destroyer. The elevation changes can be dramatic so something slightly flippy is going to turn over, disappear into a jungle and never be seen again. The winds stayed down compared to Japan Open’s in the past.

After you play, lunch is served on the top floor of the clubhouse. First you have to drop off the cart and use a compressed air gun to clean off your shoes and pants to prevent tracking of any dirt into the clubhouse.

The lunch provided is always homemade pizzas, and a small buffet of Western and Asian cuisine.

You take a bus back to the cottages, drop off your gear and head to the mineral baths inside the main building. You shower, then bathe in a hot tub to soothe your sore muscles, and finally you got outside to soak in the natural hot springs to repair your spirits. The water is Iron-orange and the walls of the pool are natural stone. You take one more shower and then you crawl back to your cottage to send emails back home or to rest before dinner.

Dinner is a short walk away from the cottages into a theme park which sits next door. Tournament Director Kozo Shimbo owns a catering service and he brings his entire staff of professional cooks to prepare a feast and serve it. Again, western cuisine and Asian cuisine including all you can eat sushi, all you can drink Japanese beer, Chu Hai – a drink that tastes like orange soda but has the alcohol equivalent of a glass of wine.

After dinner, as the players slowly make their way back to the cottages, the party kicks into high gear. Private and semi-private karaoke rooms are free. A wicked dart competition gets started and it takes four days to conclude. It turns out Wysocki could have a career as a professional dart player if disc golf doesn’t pan out. Lizotte is also pretty amazing.

The night lasts as long as you can stay on your feet. Joe’s bar is a makeshift bar created by the staff and offers harder alcohol… free.

This cycle of disc golf, eating, drinking and being entertained and spoiled by the staff continues day after day, night after night. You’re playing two incredible courses. You are surrounded by views so awesome that you can easily burn through three memory cards just trying to capture them. There is no way to quantify how blessed you feel being there.

Did it rain? It did rain. Was it miserable? Define misery? No one said you had to be out there “playing” in the rain. It’s your choice to be “playing.” And you were playing disc golf in the most exotic location in disc golf surrounded by an endless stream of pampering and kindness by the tournament staff, and you’re sharing this with your disc golf family. So was it miserable? How could it be? I would take three rounds of rainy golf in Japan to three hundred rounds of dry golf anywhere else in the world. When an opportunity is presented to you, take it and don’t complain. I understand you want to do your best and emotions run high in competition, but you’re nowhere near miserable.

The trip back to the airport starts with the entire village gathered by the bus to cheer for you. To wave goodbye and thank you for coming. A brief twenty hours later… I’ve crawled into my writing space in LA to write this note for you. The entire experience has yet to sink in and I doubt it will for a long time. Perhaps that’s why it’s a tournament they only put on every other year.