Grow the sport. It’s a phrase that many stand with and many try and champion. Seeing disc golf grow to the highest level is something many disc golfers would love to see. Yes, the sport is growing, but there is still a lot of work to do. One of the sport’s leaders is taking two big steps to help ensure the sport continues to head in the right direction.

Jussi Meresmaa is officially retiring from playing in competitive disc golf tournaments and has his sights set on yet another company. While continuing to run Discmania and Innova Europe, it is the newly formed Spin18 which will carve out a spot in Meresmaa’s already busy career.

Meresmaa reached out to us last week and gave us the news.

You have two big announcements today, but let’s start with the first. Today you are announcing your retirement from professional disc golf. How did you come to this decision and why is now the best time?

“I have been thinking this decision for a while. A few years. I remember last year I was preparing to leave for a tournament and saying to my wife that I do not want to leave. I haven’t been able to train and prepare like I would wanted to. I was putting myself into a mentally painful situation knowing that I’m going there to survive.”

“The final push came in Aussie Open where I was helping with course design and set-up, running SpinTV productions and helping my team to get ready for AND playing in a major. It just did not felt right anymore. And when my father got sick after the second round and we had to go to a hospital, I felt relieved that I did not need to continue playing. That feeling made myself retire. Just like that, after 20 years of playing competitively. After the decision, it felt great. I was relieved. I know that I had a good career as a pro disc golfer, but the future career of a pro promoter is much more interesting.”

Being a player is pretty selfish way to grow the sport. If you want to be the best, you need to put everything into it.
You’re a very busy man in the disc golf world. When did you first realize that putting more focus off the course was the smarter move for you?

“That was actually as early as 2001. I started playing in 1994, joined the PDGA in 1998 and focused on the pro career for few years hard. I followed the action in the United States and Ken Climo.”

“As a father of two, that time I realized that I will not have any chance to be a pro disc golfer. Disc Golf was way too small in Finland to support myself. Then, I decided that I need to build that opportunity for myself and as many others as possible. Being a player is pretty selfish way to grow the sport. If you want to be the best, you need to put everything into it. It does not leave much time and effort to help others. You can be an idol, but you will not employ people around you. I worked my ass off many years. I took my first salary after five years. Now, I am able to offer a dream job to 20+ people and myself. It was a long route but worth it.”

Is it tough knowing that your big playing days are over? Can we expect to see you in some of the big tournaments or no?

“Not at all. I’m done, but more motivated to this sport than ever. I love this sport and I’ll keep on playing it, but not in competitions. There is nothing better than a round with your best friends.” 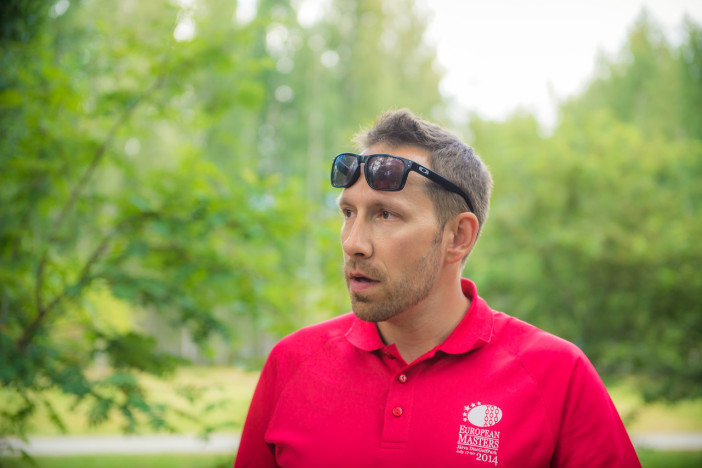 The second big announcement is the founding of a new disc golf company: Spin18. Tell us about this new venture.

“Spin18 has been in the works for almost a year. This is really interesting new venture. Our business include IP-rights, events management & media productions, licensing, strategic partnerships with sponsors and brands, joint ventures, start ups and R&D.”

“This is truly unique company in this industry. I cannot reveal other our projects at the moment, but there is much more to come.”

Will Spin18 be focusing on the European market or the world as a whole?

“We will operate globally. The United States is the biggest market and we want to be there.”

Is Spin18 looking for other partners or ideas? If so, how can they get involved?

“We are in between some negotiations, but they are not from this industry. We are open to good ideas and ventures. You can contact me at jussi.meresmaa@spin18.com.”

While you’re adding another piece to you’re already busy plate, you’re still running Innova Europe, and Discmania, correct? Any Discmania news we need to talk about?

“Yes, We did an organizational change early this year where I’m concentrating to new ventures, product development and marketing. I have really talented people in other positions. I’m sure we are stronger with our current organization.”

“As for Discmania news, we are currently working with new midrange that should be released this summer. It will fill the understable gap in our line-up.”

Is there anything else you want to cover?

“I want to thank my fans and fellow competitors, TDs and volunteers for great memories during the last 20 years. The next 20 will be even more awesome. Stay tuned.”

Congrats and thank you to Jussi for talking with us. We’ve had the pleasure of having the occasional conversation with Jussi over the last few years and it has always been educational and enlightening. It is safe to say that Jussi has been an inspiration for us at ATDG.

If he’s able to focus on the promotion aspect of the sport without any other distractions, the possibilities are endless for what he can bring to the sport. Good luck, Jussi!