You are at:Home»Interviews»Joonas Karin-Oka, 14-years-old, helps caddy Paul McBeth to another trophy

It takes more than skill to win a big disc golf tournament like the European Open. Skills like the one Paul McBeth has will get you on the lead cards, but it is a strong mental game and keen focus that will push you to eventually becoming champion.

On his way to winning the 2015 European Open, Paul leaned on his 14-year-old caddy, Joonas Karin-Oka. This wasn’t the first time Joonas caddied for Paul, but it was easily the most impactful. Do you have the guts to tell the three-time World Champion to lay up and play it safe with just two holes to play? Joonas has those guts.

As we were watching the final round of the European Open, Paul pulled Joonas into his post round interview and thanked him for all his work. Joonas is looking up at Paul with a look that words can’t quite describe, yet it is easy to understand what he’s feeling. It made us smile and we had to get in contact with Joonas to learn more about his experience at the European Open. We also talked with Paul to get his side of the story.

Before we talk about this year’s European Open, let’s go back to 2014. You first caddied for Paul McBeth at the European Masters. This was your idea, correct? Why did you decide to approach Paul to see if you could caddy for him?

“I met Paul at the European Masters in the players meeting where he just sat next to me and asked how old I was, my name, and where I was from. In the end he said ‘It’s nice to meet you.’ Next, I just asked if can I be his caddy tomorrow at the European Masters. He said yes and I was so happy because I was afraid he’d says no. Paul is friendliest and best player in the world that was one reason too. But in players meeting I had a chance and I used it.”

Was this your first time being a disc golf caddy?

“No, My first time was in 2012. I was Kai Vesa’s caddy at the Finnish Nationals. I was Kai’s caddy until the 2014 European Masters, but I was Paul’s caddy only one round.”

When you first worked with Paul, did it take long to get comfortable with each other?

“First time at the European Masters it was very relaxed and nice to be with Paul. So it was immediately very comfortable.”

Were you excited to see Paul again for the European Open and be his caddy? What was different this second time around?

We walked to hole 16 and I said to Paul what he’s been saying the whole time himself, ‘Everyone wants to be the beast. Now you have to do what beasts have to do. Be the beast!!’

“I was little bit nervous because I was afraid he wouldn’t remember anymore. Yes, it was different because now I was his caddy whole competition and we got closer every day and now Paul good friend of mine.”

What was your main role as a caddy? Would you to talk between holes about disc golf or did you keep his mind off of things?

“My main roles were keeping the bag and discs dry and carrying the bag and umbrella. Between the throws and holes I checked that his back is okay and kept his thoughts in game and mind out of other things. But I mostly cheered him up and checked that the back was good because that was very big part of his drives and those are important things in Paul’s game.”

The tournament came down to the final few holes. What were you telling Paul as it hit crunch time?

“We walked to hole 16 and I said to Paul what he’s been saying the whole time himself, ‘Everyone wants to be the beast. Now you have to do what beasts have to do. Be the beast!!’ He nailed the drive, he nailed the forehand and he nailed the put. Booom!! On Hole 17, I took him off the teepad and said ‘You are three shots in lead take a Roc and make the safe shot.’ He made the par save and that was good. Last hole, I just said par is enough. He listened to me and then he was the champion.” 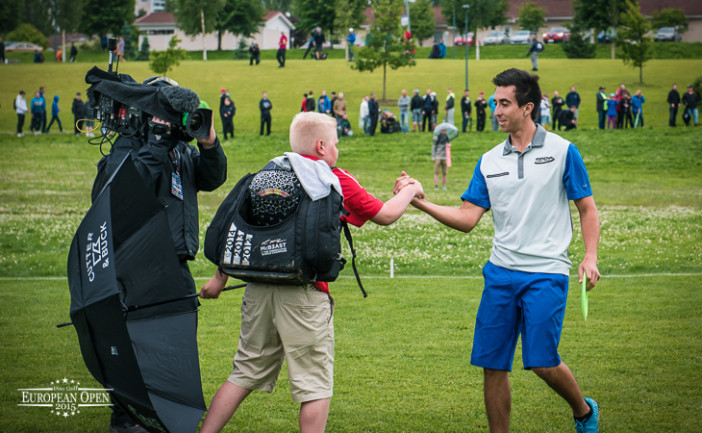 There is a great picture of you two during the final round. What was the story behind this shot?

“That was the moment when Paul parked his fantastic forehand on hole 16 and we made our handshake because the throw was perfect. That was one of the most important throws in whole major. Paul took a lead with that throw.”

Paul McBeth with his caddy Joonas Karin-Oka after winning the tournament.

At the end of the tournament on the YLE broadcast, Paul pulled you into the shot and thanked you for all the hard work. You looked like you were having the time of your life. Could you have ever imagined how the week went?

“Of course I was confident the whole time that Paul would win, but everything like interviews and people asking if I was Paul’s caddy were very amazing and I never imagined things like that.”

You posted on Facebook how it was such a great week with your United States friends. Do you feel like part of the disc golf family? Who else were you hanging around with?

“Yes, I think that I’m in the disc golf family because everyone are always so nice to me and every time ask me if I am okay and if I am not they ask what is wrong.”

“So, yes, I think I am part of disc golf family. Wow! There are so many great friends who hung out with me out there: Catrina Allen, Paul Ulibarri, Jeremy Koling, Nate Doss and many, many, many others. There are many more, but I just wanna say thank you all of my friends in disc golf!”

“I play disc golf every day. I don’t care if it rains or it is hot or cold. I just play. Will you see my name on the leaderboards? Maybe, maybe we will see. I just have to practice harder and harder. My main goal is be one of the best under-16-years-old junior in Finland.”

We love to hear what the pros throw, but what is in your bag? What are your favorite discs?

“My favorite drivers are the Innova Destroyer, Teebird and Krait. For midranges it is the Roc3 and for putters the Nova and McPro Aviar.”

What else do you like to do for fun?

“My other hobby is Floorball. When I am not on a disc golf course, I am with my friends or in a Floorball hall. And of course school.”

One final question… will you be waiting for Paul’s next European visit?

“I look foward to next year’s European Masters. I’m very excited to see Paul again and I’m sure that we will have great week out there.”

Paul McBeth and Joonas Karin-Oka look on during round three of the European Open. (Photo: © European Open 2015, Spin18 Ltd)

Along with talking with Joonas, we had to quickly catch up with the European Open champion Paul McBeth himself to get this thoughts on working with his young caddy.

He caddied for you at the European Masters. What went through your head when he first approached you to caddy?

“When he caddied for me at European Masters it was really just to give him an opportunity to be up close to the players and enjoy the action from a different perspective. At the Masters he didn’t talk as much or try to suggest any shots. He seemed a bit shy but was always where I needed him during the event.”

Did you lean on him a lot during this year’s tournament?

“The European Open was a struggle for me and with Joonas there he really made the event that much more enjoyable. He kept feeding me encouragement thought out the event, but once I injured my back he was there after every drive making sure I was ok and checking to see if I needed anything. He told me get some rest on Saturday and that we will pull through on Sunday. The first words out of his mouth on Sunday when I saw he in the morning were concerns of how my back was feeling.”

“Skipping into the round, Joonas kept doing what he does best. He kept feeding me the positive encouragements and when the scores were tied between Ricky and I he came up to me and said ‘It’s time to do what Beasts do!’ That line in that moment pumped me up and it showed in those final holes.

“Stepping up to hole 17 after the event that just happened on 16, Joonas pulled me aside because we had about a 10 minute TV timeout he told me ‘Paul you are up three strokes with two holes to go, throw the McPro Roc3. You need to just lay up for par and let Ricky take the two.’ The way he said that sounded like a professional caddy in the PGA talking to their player. The maturity he showed that day blew my mind. I never thought a 14 year old would tell me what to do on the final two holes to win a Major championship. It still hasn’t fully sunk in the knowledge of the game that this young man has.”

At the end of the tournament you were being interviewed by YLE and you pulled Joonas into the picture. Seems like he’s become more than a caddy and has become a friend, right?

“Joonas is a true friend, I’m amazed to see the growth in him as a person in just the short year I’ve known him but I’m truly impressed and can’t wait to have him in the bag next year and soon to be competing against him in the future years to come. Thank you, Joonas! You are a true inspiration to me as well as your peers around the world.”

We can’t wait to watch this relationship continue to grow. We get the chance to interview many around the disc golf community and it was fun seeing how excited Joonas was to talk with us. It was certainly something he never expected, but hearing the story of those final few holes was exactly the reason we do these interviews. For just 14-years-old, Joonas is mature beyond his years.

We have a feeling we’ll be hearing the name Joonas Karin-Oka for years to come.