You are at:Home»Tournaments»JohnE McCray, John Anderson win A-Tiers in the U.S. while touring pros are overseas

If you’ve been following disc golf at all over the last few weeks, you know that the touring scene has been overseas. With the Scandinavian Open in Sweden and the President’s Cup and European Masters in Finland, the majority of the top disc golfers in the world haven’t been playing in the United States. However, there were still two A-Tier disc golf tournaments in the U.S. and they had plenty of competition. While JohnE McCray was busying winning in a playoff at the Rogers Concrete Open in Cedar Rapids, IA, John Anderson finished with a big win at The Showdown in Shelton, WA.

JohnE McCray runs into some tough competition, but takes a victory in a playoff 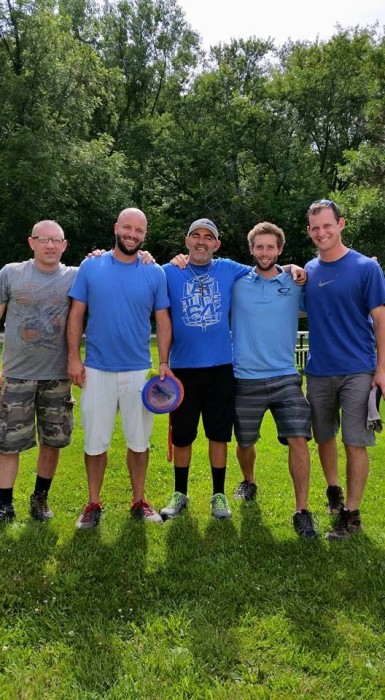 JohnE McCray with the leaders at the Rogers Concrete Open (Photo: Facebook)

JohnE McCray and his wife are true road warriors, much like many of the other touring disc golfers. While they tend to make it to most of the year’s biggest events, there are some trips they just don’t fit into the plans. This year, the McCrays couldn’t make it to the two European major tournaments these past couple of weeks. Instead, McCray opted for some A-Tiers in the Midwest. After taking a top 5 finish at last week’s Silver Cup in Wisconsin, McCray set his sights on the Rogers Concrete Open A-Tier event. Despite being the highest rated player in the field, there were some 1000-rated golfers who stepped up the plate to challenge one of the most well-liked players on the tour.

The touring pros may not have been around, but there was still stiff competition at the Rogers Concrete Open. With guys like Matt Bell, Matt Dollar, and Alex Geisinger in the field, McCray had his work cut out for him. A first round 46 was good enough to put him on the lead card, but a host of other players were in the mix. Adam Olsen was able to take the lead with a 45 while George Smith tied McCray and three others followed with 47s. The top of the leaderboard was tight, but there were still two rounds left.

The second round seemed to be a tough one for many of the pros. Despite hot first rounds, plenty of guys came in shooting sub-1000 rated rounds, including McCray. It’s not all that often that McCray shoots a 992-rated 53, but the struggles throughout the field kept him right at the top of the leaderboard. Matt Bell was able to climb back a bit, picking up two strokes on McCray along with Joe Kozlowski and Matt Dollar. Heading into the final round, it was still anyone’s tournament to win, especially with the tough courses they were playing.

JohnE McCray turned it up a notch in the final round, getting back to his normal level of play. After shooting a 1022-rated 60 and seeing a host of players come in with 63s and higher, it seemed like McCray had the tournament. However, fellow Latitude 64 player Matt Bell had other plans. Matt Bell was the only person in the field of 27 to shoot under 60, and just happened to pick up two strokes on McCray to force a playoff. JohnE McCray said it simply on Facebook: his own putt stayed in, and Bell’s splashed out. A few inches made all the difference and McCray walked away as the champion.

Second round explosion pushes John Anderson to an A-Tier victory

The Northwest corner of the United States is always plenty busy with disc golf tournaments. We saw the 2014 Pro World Championships there, the Beaver State Fling recently, and this past weekend the disc golf scene moved a bit further north with Washington for The Showdown A-Tier. There’s a lot of strong competition out West, but John Anderson came out on top.

Anderson played well in the first round, shooting a 1016-rated 57. However, Chandler Fry stole the show with a 1040-rated 54, jumping out to an early 3 stroke lead as much of the field hovered around 60. That didn’t really matter, though, because Anderson destroyed the field in the second round. His 1050-rated 46 gained him at least 4 strokes over every competitor, and landed him in first place by 1 stroke over Fry heading into the final round of the event.

Despite the hot rounds that Chris Waugh and Kyle Crabtree posted in the final round, they weren’t enough to overcome Anderson’s 1029-rated 56. Anderson was the most consistent player throughout the event, and it showed in his 5 stroke victory over the field. Falling in behind him were Waugh and Crabtree in a tie for second, Fry in fourth, and Nick Wood in fifth.

The European stretch of the disc golf season is over for most of the best pros as they’ll start heading back to the U.S. to start preparing for Pro Worlds in Pittsburgh. The PDGA Amateur World Championships start this week in Michigan and Pro Worlds are just about two weeks later, so the A-Tier schedule is going to slow down. With the World Championships right in our midst, though, there will be plenty of disc golf action.