You are at:Home»Interviews»Jeremy Rusco: Disc Golf Experience a success, plans underway for 2015 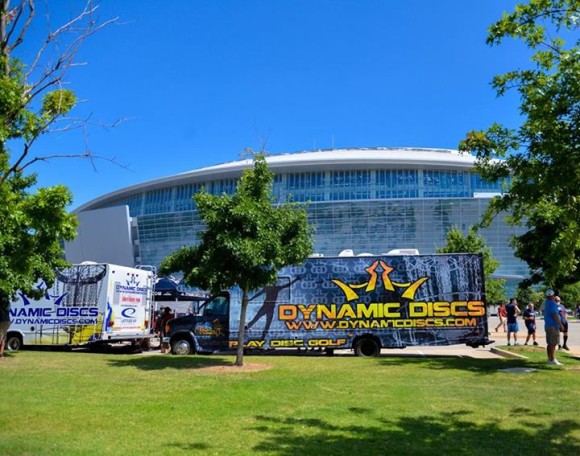 After weeks of waiting and anticipation disc golfers took over AT&T Stadium, home of the Dallas Cowboys, on July 12 for the Dynamic Discs Disc Golf Experience. About 550 disc golfers, and an additional 250 spectators, turned out for this unique chance to play ten holes of disc golf along with taking a self guided tour of AT&T Stadium.

We can’t imagine the countless hours of planning and logistics that went into this event. To get some of the details and look forward to possible future events we got in touch with Dynamic Discs’ Jeremy Rusco to hear his thoughts on this notable disc golf event.

After all of the promotion and all the talk leading up to the event, from your view, do you think the Stadium Experience was a success?

“The event was a tremendous success! We pulled off an event that was the first of its kind and I must say that it was a huge success for the sport and for continued growth. We believe that this will help disc golf to become visible in different venues and all the participants were a part of disc golf history!”

For those who weren’t able to make the event, walk us through what the day was like.

“I think that Troy Hines does a great job describing the event on a player perspective through his website DiscGolfFamily.com. 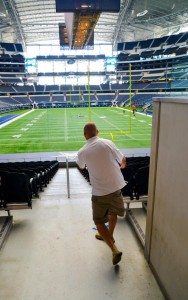 As we got closer to the actual event, it was announced that there would be a special 10th hole that was double mando. Everyone predicted correctly that it would include throwing the goal posts. Was this the most popular hole of the afternoon?

“Yes! By far this was the hole that everyone was looking forward to and the hole that left everyone wanting to go throw it again. The basket was on the 50 yard line and on the Dallas Cowboys Star so it was a very special hole that also made for a great photo opportunity. The joke was made quite often about how the field goal post saw more action in one day than it has ever seen. The sound of discs hitting the uprights could not be missed throughout the entire stadium! There were a couple near aces that hit the basket which would have made the crowd go wild.”

As the event went on and as you continue to hear feedback, what were the most common comments you heard from participants. From what we’ve seen from people who were there, many had a great time, but there were some complaints about the very long waits to start play and even long backups on individual holes. How valuable is this feedback to you guys?

“Feedback is 100% crucial to how Dynamic Discs continues to grow and improve. With this being the first event like this for a Dynamic Discs production, we knew that there would be numerous aspects of the event that would need immediate attention and improvement. There were just so many unknowns with something of this nature and magnitude. We were the first to notice and we are our own worst critics. Some things were out of our control, while there were other things that we didn’t anticipate. We have noted many issues that were not up to DD standards and will take the necessary steps to make sure these do not become issues for a possible 2015 event.”

“For a potential 2015 event, we know that we will have scheduled tee times for each group to help with the flow of players and also anticipate renting the stadium for a longer period of time. We are even considering the possibility of renting the stadium for the entire day and finding a way to host the largest disc golf event in the world. We feel something like this will get the event on the radar of more media channels & stations. Maybe we could even get lucky enough to get a quick mention on ESPN if all goes well.”

Did the Dallas Cowboys have any comments after the event?

Jeremy Rusco with Harrison Clark, Account Executive at AT&T Stadium who reached out to Dynamic Discs.

“They were very pleased with the event and it was neat to hear them say numerous times about how they wanted to make sure that we were all enjoying ourselves. There was no doubt that the players were enjoying themselves as some would come across the field doing cartwheels, take their shoes off, tackle each other, or run a receiver route with the disc being the football. We are already in discussions to get the 2015 event scheduled and locked in on their calendar. They also just commented on how they were surprised to see this event show up in so many different media outlets and that they really liked that! Great stuff all the way around and we look forward to working with them on a 2015 event.”

Are there any plans to expand the Dynamic Discs stadium tour? Will you return to AT&T Stadium next year? If so, will the event be the same or will you make it even bigger?

“Absolutely! However, hosting something like this in a market outside of where we have the largest support would be much more difficult. The volunteer staff and DD staff that it took to put this on was immense and finding that type of trusted support in a region that we are not as well known, may prove to be difficult.”

“The 2015 event at AT&T Stadium is going to be a huge deal and something that we have a full year to plan! There are a lot of reasons to be excited for 2015 and I have a feeling that the event will sell out in no time at all and be the disc golf experience of the year for all those who attend.”

Is there anything else you want to make sure we include?

“I was greatly impressed with the entire crowd of disc golfers that came to the event! We had our concerns that someone might show up and do something that might reflect negatively on the disc golf community and/or Dynamic Discs. There wasn’t a single issue that has been brought to our attention and to that I thank everyone who participated in a positive and professional way while at AT&T Stadium!”

Thanks to Rusco for talking with the AT&T Experience. We certainly look forward to what the future holds for this and other events. Be sure to check out the #StadiumDiscGolf hashtag on Facebook and Twitter for more photos and videos from the event.