You are at:Home»Reviews»Putters»Innova XT Aviar Review

The Aviar. One of the most talked about putters in the sport. We could argue the Innova Aviar is the putter that is the baseline for any other putter. With many different variations in different plastics, the Aviar has not only shaped the history of disc golf, it is shaping the future. The latest addition to the Aviar line is the Innova XT Aviar. While it is a new blend of plastic, it’s ultimately the same disc you’ve known for years.

Innova says this about their popular putter:

The Aviar Putt & Approach is our most popular disc model and the number one putter in disc golf. It is versatile and is dependable in all conditions. A must have disc for any serious competitor’s bag. This is the beadless model that provides an excellent grip. It is a straight flier with a predictable finish.

Innova sent us a new XT Aviar to reivew, but before we talk about the flight let’s focus on the new XT plastic.

Innova’s XT plastic is firm, but not hard, and soft, but not floppy. Let’s explain. When you first grab the XT plastic you’ll find a nice soft and almost chalky feel to it. It is almost similar to older DX style plastic in terms of it being a little soft. The chalky feel is very apparent around the shoulder of the disc and does help you get some added grip on the disc. Certainly more grip that you’d find in a typical Pro plastic.

With XT standing for “Extra Tough,” there is an added element of durability to the XT plastic. After hitting the chains, the basket, and even some tree shots, the XT plastic has held up quite a bit. When we gave it a pretty strong throw straight into a tree (on accident) we were expecting a decent sign of wear to appear. It nearly looked new after inspecting the disc. We can rub a finger across the outer edge of the Aviar and it is very hard to tell where it has been making contact with something.

In terms of their DX and Pro plastics, the XT plastic certainly out ranks them in terms of durability and even makes some strides in the grip side too. There are some golfers who like their discs to remain new, especailly putters. Others like to have their discs beat in a little bit. The XT plastic will give that beat in softer feel with the durability of a brand new disc right out of the box.

As for the overall flight of the XT Aviar, it is certainly in the Aviar family, but is on the stable side of things. It has the same feel that even your everyday DX Aviar, but with that added grip. While the feel is the same, the flight is slightly different. The speed and glide of the Aviar, the latter is often its most defining charactierstic, remain the same as in other plastics, but the high speed stability is almost a notch higher.

You’ll often find a DX Aviar to have a little bit of turn, especially when just slightly beat in. It makes for a great little turnover putter and can be a nice and straight approach disc. The XT Aviar was quite stable, especially for a beadless Aviar. It virtually had the stability of a brand new KC Pro Aviar which has a big bead. We were able to give it quite a bit of power and it would fly flat and straight while never showing any hint of turn. With the durability of the XT plastic, we’d expect this about of stability to remain in the XT Aviar for quite a while.

Even with the high speed stability, the XT Aviar has a very similar fade to a DX Aviar, but it comes close to the fade of a new big bead KC Aviar. Typically the Aviar’s fade is very soft, but will finish to the left ever so slightly. The KC Aviar on the other hand has a slightly harder finish which many love in the circle and off the tee. In the case of the XT Aviar, the fade fell right in between the two previously mentioned versions. It couldn’t quite be rated a 2 (the KC’s Aviar’s fade), but it certainly was stronger than a DX Aviar.

Overall, for the Innova Aviar we’d agree with their ratings of 2, 3, 0, 1, but in the case of the Innova XT Aviar we’d adjust those to 2, 3, 0, 1.5. It is surprisingly stable at high speeds and can really hold a line easily. The fade is slightly more than a DX Aviar. 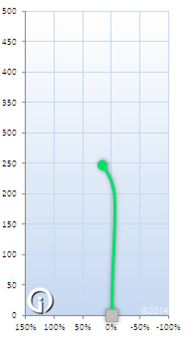 The flight chart from inbounds Disc Golf shown is for the everyday DX Aviar. While the flight is very similar, expect the XT Aviar to have a little more stability and finish with just a hair more power.

The XT plastic is a great addition to their line of multiple plastic blends. It has that nice soft and grippy feel that a good DX blend has, while still remaining firm on the rim. Even after some tree hits the durability of the XT plastic really shines. It might take a while to really beat this plastic in. In our minds, if you’ve been wanting the durability of a Pro plastic (or better), but the grip of DX, the XT plastic is worth trying. It might be the right combination you’ve been dreaming of.

As we stated at the beginning, we could argue that the Aviar is the putter that every other putter is compared to. With the various versions out there from the beadless and big bead to very firm and very soft, there is something for everyone. The XT Aviar fills that gap of durability and grip while giving you a nice stable flight that can be trusted time and time again.