You are at:Home»Reviews»Midranges»Innova Wombat Review

The latest offering from Innova Discs to receive their “VTech” is the Wombat. Just like the VRoc, which is a San Marino Roc with the VTech added to help with torque resistance, the Wombat is a variation of the Foxbat. With a similar feel to the Foxbat, the Wombat also has a similar straight flight that can really help you hit some tight lines.

Innova says this about the new Wombat:

The Wombat with VTech feels better in the hand, is easier to throw, and has more meat in the rim for extra torque resistance. Straight shots still go straight and turnovers stay turned with a gentle flat landing.

Innova sent us a GStar Wombat to check out and we can safely say it is one of the straightest out-of-the-box midranges available. The look and feel of the Wombat rightfully reminded us of the Foxbat. It is a different feel, but they are very similar. The Wombat is a pretty deep disc and it does have a lot of space to get a comfortable control grip. This deeper feel really did translate to a lot of glide and could really be used as a model to illustrate what glide looks like.

When you look at the flight numbers from Innova (5, 6, -1, 0), you’ll notice how it has a little turn, but no fade. Both numbers are accurate and it does translate to one crazy straight flight. During our tests we brought out the Wombat on a hole that was slightly downhill and relatively straight. Many opt to go on more of a hyzer route and let the elevation help give it some room to fly. We took out the Wombat and went straight at it and almost laughed at how accurate it was. It was released with just a little hyzer before flipping up to a flat angle and just gliding for days. It even had a little left to right wind and it showed no signs of turning over. The shot continued to just glide and hold that straight line. As it got to the end of the flight, where most of the elevation change was, it continued to hold its flight path before settling straight to the ground. There was no movement from to the left at all. It was a true 0 rating for fade.

For an average arm, one who might throw a midrange on anything around 250-275 feet, the Wombat did carry a little further than expected. It is a touch faster than normal, but it’s the glide that really does it. Even on long approach shots we found the Wombat to be extremely useful. With that said, if you need a disc that will finish to the left, this isn’t your best option. When we say it has no fade, it really doesn’t have any fade.

You can put the Wombat into a little turnover shot if you help it a touch. The glide helps, but there isn’t enough turn to make it naturally want to turn over. The lack of fade will ensure a finish on the same line it starts on. Can it hold a turnover? Yes. Is it likely the best disc for it? Maybe not. Straight shots though? No doubt about it.

We previously mentioned how the VTech technology helps with torque resistance and that seemed to be the case. Yes, the Wombat will have a little turn, but on a flat release, you don’t see it as much. It will flip up from a small hyzer, but once it hits flat, it will remain there. If thrown flat, you’ll see it try and turn over a little, but not very much at all. It really just wants to fly straight. 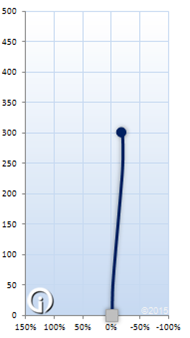 Overall, we’d rate the Innova Wombat at 5, 6, -1, 0. It’s right inline with Innova’s numbers and will produce a very straight flight that could reach some surprising distances.

The flight chart from inbounds Disc Golf shows a flight very similar to what we saw. It’s a very straight flight, a hint of turn, before no fade. Straight for days.

The Wombat isn’t a complete unitasker, but it does do one thing really, really well: fly straight. The flight is almost unexpected at times. We were able to go after some very small windows and really hit some tight lines because we knew the Wombat wouldn’t turn over on us and it wouldn’t fade at the end. Watching the Wombat finish it’s flight is fun. You just keep waiting for it to fade and the next thing you know it is on the ground.

From straight drives with a lot of control to long approach shots, the Innova Wombat is a disc that will turn heads for many. Not many discs fly the way the Wombat does and the results could really solve that hole in your bag.

The Wombat is now available in Champion plastic and Innova sent us one to see how it compared to the GStar version.

It only took a few throws to see the ever so slight difference in flight between the Champion and GStar Wombats. For many, the flight will be nearly identical. At times though, you’ll see just a little less turn and a fraction more fade. We had a few throws that were still dead straight, but the disc finished maybe just a foot or two to the left. If you really wanted to put a fade rating on it, it would be about 0.25.

The glide is still there and the sneaky distance is along for the ride. The Champion Wombat was a little stiffer which could make it more appealing to those who found the GStar Wombat to be a little too flexible.

We’re giving a Champion Wombat away on our Facebook page! Enter by the end of the day Monday, July 6! Check out the Innova Wombat at your local retailer today.