You are at:Home»Reviews»Drivers»Innova Thunderbird Review

The “longer Teebird.” A phrase that is often mentioned by disc golfers everywhere. They desire the same flight of their beloved Innova Teebird, but with the added distance. There are some discs that come close, but it can be hard to find something that clearly fits the description of a longer Teebird. Heck, we even said it in our review of the Discmania G-Line PD. Now, even Innova is taking a shot at filling this void with the introduction of the Innova Thunderbird. Innova first described the Thunderbird in the approval by the PDGA:

The Thunderbird comes from strong bloodlines. The stability of a TeeBird with the speed of a Valkyrie; it could be best described as a seasoned Firebird, but with less fade. The Thunderbird is still predictable in the wind and a great choice for your new favorite long-range placement driver.

Right away, you’ll see a very familiar rim design to the Teebird. It has that little lip on the very end of the disc that can also be found on the Teebird. The additional speed obviously means a slightly wider rim (1.7 cm vs. 1.9 cm), but it is a rim that didn’t take very long to get used to. The top flight plate has a small shoulder before a flat top. It isn’t the flattest disc out there, but it also isn’t domey by any means.

An easy comparison would be to the GStar Teebird. The GStar Teebirds we’ve seen aren’t board flat (like the Teebird3), but aren’t super domey like some of the 12x Teebirds that can be found. The Thunderbird does have a nice mix of that slight shoulder and flat top that should appeal to many.

As we stated before, the Champion and GStar Thunderbirds have slightly different flights, but they complement each other well. Both versions come out of the hand nicely and get up to speed quickly, but the GStar version showed a small amount of turn. While Innova gives the Thunderbird a 0 for turn, we’d bump that to about a -0.75 for the GStar Thunderbird. On a flat release the GStar Thunderbird will kick into this slight turn, but hold that angle before coming out of it at the end of the flight. It isn’t flippy, just shows a touch of turn. If you’ve ever thrown a slightly beat in Teebird, the turn you’d see then is very similar to what you’d see in a GStar Thunderbird.

The Champion Thunderbird on the other hand is more stable, but still shows just a hint of turn. We wouldn’t give it 0 rating here either, but would adjust it to about a -0.25. The flight was very similar to a fresh Teebird, which even for us, typically show a hint of turn. Even with this slight turn, the Champion Thunderbird was more stable than the GStar.

If you’re facing a headwind, both versions of the Thunderbird performed like we expected. The results were again very similar to the Teebird. It won’t fight it that hard, but it also isn’t the worst option. Mild headwinds shouldn’t be much of a problem with the Thunderbird.

After flying down the fairway with a slight turn, the Thunderbird will finish with a moderate fade. It certainly isn’t the hardest fade out there, but it will finish to the left. We’d actually say that it mirror’s the fade of the Teebird quite well and is very similar. The GStar Thunderbird’s fade was slightly weaker than the Champion’s fade during our tests.

We also found the Thunderbird, especially the GStar version, to be quite useful for big anhyzer shots. It needed some help to really turn over, but if you gave it a little height and start it out on a line slightly left of center, you should be able to execute a nice sweeping anhyzer. The Thunderbird would hold this slight anhzyer and continue to glide on out. It actually held the height better than we expected before finishing pretty flat at the end of the flight. Stronger arms were really liking the ability to give it a little added anhzyer and let the Thunderbird do the work for them. It’s neutral flight really does translate to a very controllable disc.

Toward the end of our testing session, one of the members of our test team took out a GStar Teebird and threw it against the GStar Thunderbird. The Thunderbird was thrown first and carried a nice slight turn for the majority of the flight which ended with just enough fade to the left at the end of the flight. The Teebird was thrown on the same line and showed virtually the same. The only difference was the fact the Thunderbird flew a farther than the Teebird. After the Teebird landed we looked at each other and said, “it’s a longer Teebird after all.” 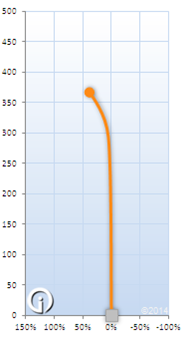 Overall, we’d rate the Innova Thunderbird at 9, 5, -0.25 to -0.75, 1.75 to 2.25. You get a nice combination of speed and glide with just a little bit of turn followed by a moderate fade. Champion Thunderbirds will show less turn and more fade while the GStar Thunderbirds will have a slightly straighter flight. The flights do complement each other and having both versions in your bag wouldn’t be a bad idea.

The flight chart from inbounds Disc Golf shows a good composite of what the Thunderbird can do. If you average our numbers, you come very close to what this chart shows.

When someone asks which disc is a “longer Teebird” we’d have to think the Discmania PD is the most common answer across the board. Now with the release of the Thunderbird, we’d have to give the title of “longer Teebird” to the Thunderbird. The flight patterns are nearly identical, but the Thunderbird’s is just stretched a little longer. Same great glide, same moderate fade. The PD you could call a “longer overstable Teebird.” Paul McBeth’s comments on calling the PD a longer Eagle are accurate as well.

Could you keep a PD and Thunderbird in the bag at the same time without a lot of overlap? Maybe. If you have a very stable PD with a decent amount of fade, you could complement that with a GStar Thunderbird. They might get the same amount of distance, but the PD will fade harder for you. A G-Line PD and either Thunderbird version will produce very similar flights. It all comes down to personal preference.

If you compare the Thunderbird to the Dynamic Discs Escape, especially when new, the Escape has a top with a very gradual and consistent dome which is a little larger than the Thunderbird. In terms of flight, the glide was similar, you could maybe make a case the Escape has a hint more glide. The Escape will also turn a little more, but also fades harder. The discs are similar in many ways, but carry out their flight a little differently.

The end of Innova’s description they use a very unique phrase to describe the Thunderbird: “long range placement driver.” You can’t think of the Thunderbird as a distance driver. It certainly does slot right between your Teebirds and Destroyers and is very controllable. It will want to turn a little bit and has enough fade to bring it back past center all while getting you some nice distance. Just as you put a lot of confidence into the Teebird, you can put a lot of confidence into the Thunderbird.

The Innova Thunderbird is being released to Innova retailers around the world. Contact your favorite retailer for exact delivery date.