You are at:Home»Reviews»Drivers»Innova Tern Review

While Innova Champion Discs certainly has its fair share of high speed drivers, the latest high speed release has been turning heads. The Innova Tern was first announced in late 2012 and charged onto the scene earlier this year.

Innova describes the Tern as:

Like the name, this disc has natural turn. Similar to the Archon, the Tern is a fast slightly understable disc that is designed for long shot shaping throws. In the hands of a powerful player, it just may be one of the farthest flying discs due to the long glide and natural turn.

We first got our hands on the metal flake Terns that came out for Innova’s 2012 holiday disc and the 2013 Bowling Green fundraiser. These Terns, along with the Terns in Star plastic are slightly more understable than the Champion versions. We’ll first focus on the Champion Tern.

While the Tern certainly likes a strong arm, it will perform nicely for golfers who don’t have the strongest arm in the world. That is due in part to the Terns natural turn. When thrown with a flat release the Tern will start to head right and start a very nice s-curve flight. The understable flight will help weaker arms get the Tern to fly as predicted and gain a little distance. Stronger arms will be able to get the Tern to constantly hyzer-flip on release or produce long s-curves in the air.

Because of the understable flight, the Tern doesn’t like a very strong headwind. If thrown into a strong headwind ( > 10-15 mph), the Tern will see a stronger turn and roll over. We did notice that if you are facing a small headwind, the Tern could hold up, but it might need a little hyzer on release.

The other feature of the Tern that stands out is the glide. The Tern will really carry down the fairway for some added distance. The glide really allows the Tern to carry out its full flightpath. The glide really kicks in once the Tern gets to full speed. It helps the Tern hold the high speed turn and also allows the fade to kick in. Because the glide helps the Tern remain in the air, as it starts to slow down, the Tern’s fade is noticeable. On many test throws we expected the Tern to keep holding the high speed turn and not fade back left. This was not the case though. The glide helped hold the Tern up long enough so it would finish left for us.

The Tern did seem nose sensitive though. If the nose was kept down, the turn would kick in sooner and allow the s-curve style flight path to fully develop. On a few throws, with the nose a little higher than normal, the flight path was straighter with less turn and a little more fade. 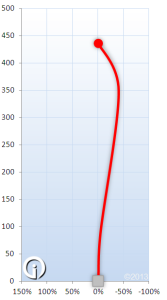 In our tests, the stronger arms were able to throw the Tern quite far. On a few throws, we actually heard “oops” come from one of our testers as they put a very strong throw into it.

The flight chart from inbounds Disc Golf shows the s-curve style flight we’ve been talking about. Innova’s flight ratings for the Tern do seem accurate. We’d also give the Tern ratings of 12, 6, -2, 2.

Overall, with a nice high speed turn and great glide the Innova Tern will be a top performing high speed distance driver for many levels.