You are at:Home»Reviews»Drivers»Innova Teebird3 (T3) Review

The Innova Teebird3. This isn’t your father’s Teebird. It’s the next generation’s Teebird. Thanks to a new flatter top, you’ll get a flight that is just a hair faster, slightly less glide, but the same fade you’re looking for out of one of disc golf’s most popular fairway drivers.

The Innova Teebird3, also known as a T3, was initially released in Champion plastic as a fundraiser for the Fort Steilacoom Open and is now fully available in GStar plastic. Innova has this to say about the Teebird3.

The TeeBird3 represents the evolution of the TeeBird. Many people have described a lot of discs as a “faster TeeBird”, but this is the real deal. The flat flight plate promotes speed while reducing glide, effectively producing consistent, accurate flights. This is a point and shoot, target specific fairway driver.

While you can say it is a faster Teebird, we might not be inclined to say it is a longer Teebird. The flat top does in need provide a very sleek profile for the Teebird3. This profile does translate to a disc that flies slightly faster than the Teebird, but the reduction in glide results in distances that are near identical to it’s Teebird brother.

We took the Teebird3 in both Champion and GStar plastic to our local testing grounds to see how it stacked up against your everyday Teebird and even some other popular variations of it. Members of our testing team tend to reach for the Teebird on many holes at our local courses and led to a very easy comparison between both the Teebird and Teebird3.

With our first throws we all noticed the slightly faster flight. It got up to speed right away and showed more “giddy up” as it got down the fairway. Along with the speed difference we also saw that reduction in glide that Innova has mentioned. The glide was more noticeable than the speed though. On a near consistent basis we were able to reach the basket and achieve the same distances with the Teebird3 that we typically reach with Teebird. Again, “faster Teebird” makes sense, but not necessarily a “longer Teebird.”

Right away we noticed the slightly more stable flight out of the Champion version than the GStar version, but the difference was small. While there are certainly some very stable Teebirds out there, and some flippy ones, the Teebird3 was nearly spot on with the 0 rating for turn and 2 rating for fade. The GStar version was the most true on these numbers. We saw a stable flight at high speeds that showed no hint of turn, yet it wasn’t so stable that we weren’t able to control it. As the flight would start to slow down we saw a very predictable fade that would consistently finish to the left. From start to finish the flight was nearly identical to what you’d expect a good Teebird to be like.

The Champion Teebird3 was a hair more stable in our tests. We saw the same resistance to turn, but just a slightly harder fade. Trust us when we say slightly. It isn’t even enough to make it a 3 rating for fade. For those who desire that overstable 11x Teebird type of flight, but without the high price tag, the Champion Teebird3 could be your ticket.

Because of the reduction in glide the Teebird3 proved very useful on any big anhyzer shot. While you certainly need to help give it some anhyzer and help force it over, it will continue to hold on that line until the end of the flight. The slightly less glide helps it from fading back out too early and softer fade, especially in the GStar, helps it hang onto that left to right flight. This really ups the amount of control you have in the Teebird3 and opens up some other shots right out of the box.

When the Teebird3 was first announced, especially with the flat top, disc golfers wanted to know how it would compare to the very sought after 11x Teebirds that were very flat. Soon the discussion went to how the Teebird3 would compare to the Steve Brinster Champion Teebirds and Avery Jenkins Star Teebirds. Luckily, we’ve been able to throw each of these versions and have a good feel for how each of these stand up to each other.

The Steve Brinster Champion Teebirds was the most stable of the bunch. This would be followed by the Avery Jenkins Star Teebirds and the Champion Teebird3 would slot in next. The 11x Teebirds, espcially when new, would be the next in line, before leading to the GStar Teebird3. Finally, we’d put the 12x Champion Teebird at the end of this line. These are all relatively close, and could easily vary between runs, but take this as a general idea on how they stack up against each other. 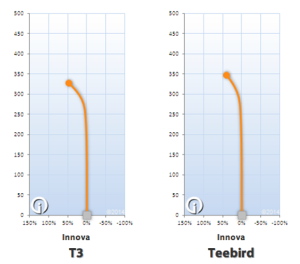 Overall, we’d rate the Innova Teebird3 at 8, 4, 0, 2. It does fly a little faster than the original Teebird and has a little less glide, but the flight, especially out of the box, is very consistent.

We used inbounds Disc Golf to compare the flight charts of the Teebird3 and Teebird. Both flights are very similar and typical of what we saw in our tests.

The Teebird3 is a nice step into the next generations of Teebirds. Many disc golfers desire the flatter tops and with the amount of discs Innova produces, the molds clearly wear out and even break with all the usage. This new top, while it does change the characteristics a bit, produce a flight that any Teebird lover could enjoy. It relies on speed more than glide in this case, but the end results are very similar. The initial run of the Champion version was a little more stable than the GStar, but both versions of the Teebird3 have qualities you can fall in love with.

Will the prices of the highly sought after 11x Teebirds come down due to the new Teebird3? Probably not. Will it be easier to achieve a very similar flight without costing you an arm and a leg? Yes.