You are at:Home»Reviews»Midranges»Innova King Cobra and Super Stingray Review 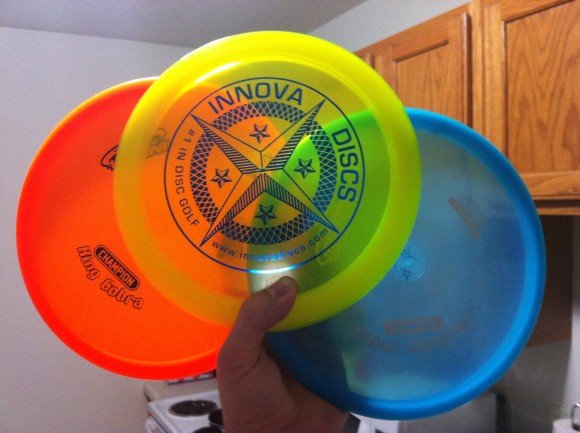 I recently picked up three new discs from Innova. From left to right in the photo: Champion King Cobra, Proto Star Champion Mamba, and Champion Super Stingray. I was able to get out for a practice round earlier today and toss around the King Cobra and Super Stingray and was impressed. I have not thrown the Mamba yet, hopefully I’ll get a chance this week.

I’ve been trying to work more midrange discs into my game lately. It has been said on just about every disc golf website, message board, Facebook group, etc… DISC DOWN! Just because a Destroyer or Boss can fly over 400 feet does not mean that you should be throwing them. Now, I normally stick to my Teebird, Firebird, Valkyrie combo for most holes. Even then I found myself needing to power down a Teebird on holes around 250-275 feet. That normally led to it just being a little too overstable at the end of the flight. I know I needed to find a few midrange discs and dial them in. Throwing a midrange can be hard. You’ll often get that flutter (or commonly known as Off-Axis Torque) if you don’t release a midrange disc correctly. It needs a little touch and smooth form and you’ll be sailing a midrange in no time. My best tip…play an entire round with just that one disc. You’ll learn how to throw it in every possible way. 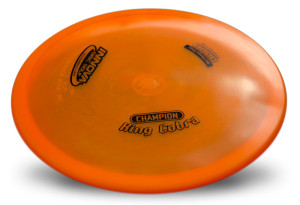 I gave it its largest workout on two holes. A downhill 240 footer and a flat 274 footer. The downhill hole had a wind from right to left that was blocked for about the first half of the throw. The pin sits about 20 feet left of the teepad. I put this out dead straight and let the wind and natural flight path of the disc take over. I put it about 20 feet beyond the hole, an easy two putt. I was impressed, it did not take off in the slight cross wind and held a line nicely. I moved on to the 274 foot flat shot. This had a straight tailwind of about 15 miles per hour. The basket sits tucked between two trees in a little “valley” (valley is a strong word to use, maybe 2 foot drop off from around the trees). Right in the middle of the fairway sits a small tree but it is right on the line you want to hit. Two choices, right of the tree, needing more fade or left of the tree and dead straight shot.

Since I was using the King Cobra I wanted to see what I could get out of it with a tailwind. I put it to the right of the tree in the fairway, a little higher flight than I normally would and let the disc work. Did not want to turn to the right at all, once it started to lose speed it began its fade. With the wind behind it, it helped moving it from right to left. Sat about 15 feet from the pin. I was impressed. I tried it on a bigger hyzer line a few times and liked what I saw too. If you want more of a sweeping hyzer midrange shot, this should fill it. It won’t really flip up on you though. Just trust the disc. This will get some ink on the rim and will stay in my bag. 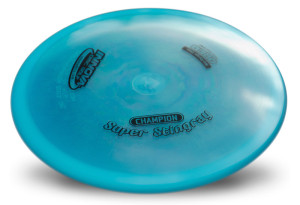 Innova Super Stingray – [ 4 | 5 | – 1 | 1 ] Just like the King Cobra the Super Stingray also has a close cousin. The Innova Stingray is more understable than the new Super Stingray. Innova describes this disc as “a straighter Stingray to handle players with power.” I threw this disc earlier today and lets take the same two holes above as the main examples.

The downhill hole saw this start straight, fly straight, and land straight. Even with some wind coming from the right, I liked what I saw. I knew this wasn’t the best hole to try this on. Plus, I threw it right after the King Cobra and should have gone on a straighter line to the basket. I took it over to the downwind hole and this time, took the line to the left of the tree. I was really going straight at the basket. With a nice smooth release it flew as advertised. Picked up with wind nicely and finished very true.

I did find the Super Stingray to not like ANY Off-Axis Torque. I gave it a little too much on one toss and it started a little turn but came out of it but never really “came back” to where I started it. Granted, this is more operator error than anything. I want more time with this disc. I currently use the Vibram Ibex as my straight midrange. I saw some similarities between both of these discs. I’m not sure if it will make its way into my bag full time. It is nice to have around though. I’ll have to revisit it. If you’re looking for something for that slight anhyzer midrange slot or that straight midrange shot, this could be worth a look. I don’t “dislike” the disc at all. I just don’t know if it fits a void in my bag.