You are at:Home»Reviews»Putters»Innova Nova Review 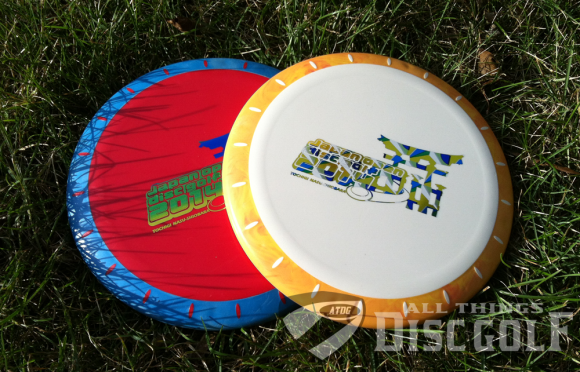 When we first learned about the Innova Atlas, we also heard about an upcoming putter. After seeing what the Atlas could do on the course, we were anxious to see what a putter would be like with Innova’s overmold feature. A few weeks ago, the Innova Nova was released as a fundraiser disc for the 2014 Japan Open.

While still featuring the overmold, the Nova was released in two versions of Pro plastic. The flight plate is made of a firm Pro while the rim is molded in a softer, grippier Pro.

Innova says this about the Nova:

The Nova is a new Aviar like overmold that has all of the high speed stability of a Big-Bead Aviar along with the least low-speed fade of our Aviar type putters. With the Nova, golfers get the best of both worlds and suns.

We picked up a few of the Nova’s to test out on the course. Both were 175g and felt identical to each other. The Nova does have the same “compass points” on the bottom of the disc that the Atlas has. This is where the overmold is injected.

While the Nova does have an Aviar-like feel, it does feel a little deeper in the hand. We felt as if the deeper feel actually gave us a little more control when driving with the the Nova. We felt like we had a great grip and as if we could really put the Nova on our intended line without worrying about the disc slipping out of our hand.

We used the Nova as a driver, approach putter, and as a putting putter inside the circle. In our minds, the Nova really shined as a driving and approach putter. While the Nova doesn’t have quite the stability of a Big-Bead Aviar, it is quite close. We did notice a little bit of high speed turn, but it was marginal.

At the end of the flight, the Nova’s fade was quite small. There was a little bit, but never much. This really allowed us to throw the Nova on many different lines and see if hold that flight throughout.

If we gave it some hyzer on release, it would flip up just a little bit, but never completely flat, and then hold that angle all the way to the ground. The Nova was also able to hold a very nice anhyzer line throughout the flight as well. Where we really got attention from others was when we threw it flat and straight. It would track to the right just a little bit before fading back flat to the center with a very straight flight. Have a short hole with a tight window? The Nova was virtually point-and-shoot straight.

As an approach disc, we could either go right at the basket, or give it a nice little sweeping hyzer towards the basket. Because of the little fade, we always felt in control of where the Nova was heading.

When we moved to the circle, we weren’t quite loving the Nova as much. Now, this might be a personal preference among the golfers we had around that day. As we stated before, the Nova does feel a little deep in the hand. This caused us to feel like we weren’t getting that great “finger pop” and a strong release on the Nova. If you like a more shallow putter, the Nova might not be the most comfortable for you when you’re inside the circle. 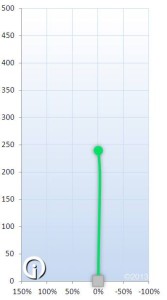 With that said though, the Nova was very straight as a putter when in the circle. It wouldn’t hyzer out at the end at all. It went exactly where you threw it.

The flight chart from inbounds Disc Golf shows this flight path. While very stable at high speeds, you will see a little more turn out of the Nova than a Big-Bead Aviar. The distance and glide are very comparable to the Aviar family of putters.

The Nova is Innova’s second disc with their overmold technology. While not the only company to produce an overmold disc, we are curious to see where Innova will go next with their brightly colored overmolds.

Update: Novas are still available for sale at Hero Disc USA as a fundraiser for the 2014 Japan Open.