You are at:Home»Reviews»Drivers»Innova Katana Review

The speed 13 driver. The disc that loves a big powerful throw and room to fly. Some are very stable and can fight headwinds like the best of them. Others are understable and can be a great step into the distance driver category. The Innova Katana is one example of a speed 13 driver that has a little bit of everything to offer that can result in some massive distance when thrown correctly.

Innova says this about their downwind bomber:

The Katana is built with the finesse thrower in mind. Recommended downwind driver. Hit the angle right and watch it bolt out of sight. The physical characteristics resemble a Boss with the flight characteristics of a Sidewinder on steroids. Master the technique of Katana and rule the course.

Innova sent us a Katana in the newly released GStar plastic to review and after giving it a workout, the final phrase of their description above stands out the most. There is a technique to throwing the Katana and it can be very useful. We’ll get into details in a moment, but we want to first start with the overall flight of the Katana.

The Katana is a very flat disc, especially in the GStar plastic. This flat profile not only helps the Katana fly fast, it helps with the very wide rim too. When you have a rim as wide as the Katana you must have a strong grip on it in order to really get the disc up to speed. The slim profile makes it easier to fit the disc into your hand while not fighting a domey top. The slight flex of the GStar plastic also gives you the ability to really dig into it as well when you go for that big rip.

The speed and slim profile also means it will come out of the hand clean and really wants to fly fast. Many times during our tests we commented about how the Katana wasn’t kidding around and really would head down the fairway quickly. The Katana has another gear that some other discs don’t have and it doesn’t take long to get into it either. When you really get the Katana thrown properly, heads will turn at just how fast it is flying.

Two flight numbers stand out the most in the Katanta and it’s the -3 for turn and 3 for fade. In our minds, while both are important, the fade is the number you need to focus on. Will the Katana turn? Yes, when thrown correctly. It certainly will kick into a nice understable flight when up to speed and will hold that angle for most of the flight until it begins to slow down and the fade kicks in.

Strong arms will easily be able to hyzer flip the Katana and actually produce a very cool looking flight. The stronger arms in our group were able to dip the wing down and really allow the Katana to flip up to flat and even roll into a small turn before fading. Seeing these long distance hyzer flips across open fairways was quite the sight. For a disc with that much speed, there was a lot of movement and energy in these flights.

The Katana’s turn isn’t the number to think about though. You can’t forget that the Katana will fade and if you don’t get it up to speed enough, or can’t keep the nose down (more on that in a moment), the Katana will be relatively overstable for you. It can easily fade like a new Destroyer, for example. As soon as you begin to admire the nice understable flight from the Katanta reality will set back in and it will snap its way back to the left. The difference really comes in on throws where you don’t quite hit the technique that we talked about earlier.

The biggest key to to the Katana is the nose angle on release. If you want a true “Katana style” flight, the front edge of the nose must be kept down. This is all part of the “technique of the Katana” we’re talking about. When the nose is raised it will resist turn and preform much more stable than you’d expect. Then it is more of a Destroyer type flight than a Katana. If you throw a Katana and can’t get that turn, check the nose angle of the Katana on release. It will provide you with a lot of answers and could solve a lot of problems on the disc golf course for you. 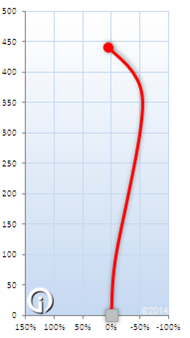 Overall, we’d agree with the flight numbers of the Innova Katana and rate it at 13, 5, -3, 3. While we haven’t had a chance to test it, Innova does give the Champion Katana ratings of 13, 5, -2, 3. If you aren’t able to keep the nose down the Katana will be much more stable for you. If you do get the nose of the Katana to remain down, the big s-curve style shots will come often.

The flight chart from inbounds Disc Golf shows the s-curve style flight we were seeing when we got the Katana up to speed. The turn kicks in early and really allows for a full flight through the air.

When you hear the saying “drive for show, putt for dough” the Innova Katana can be a perfect example of the “drive for show” part. The big s-curve style shot can really turn heads. The Katana not only flies far, it flies far very quickly. The distances the Katana was covering in such a short amount of time was pretty unreal.

When you have a tailwind or calm conditions and want some massively long distance, the Innova Katana can be the answer. Keep the nose down, give it a strong rip, and let the disc do the work. You’ll be rewarded handsomely.