You are at:Home»Reviews»Drivers»Innova GStar Leopard Review 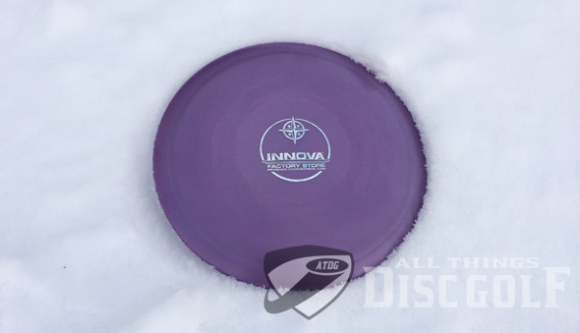 In late December, Innova Discs announced a new run of their Star plastic under the name of GStar. A limited run of Leopards in GStar were first released through Innova’s Factory Store and later followed by another small batch. Shortly after the announcement of the GStar plastic, we talked with Innova’s Dave Dunipace to learn more about what disc golfers could expect from the new plastic.

We were lucky enough to get our hands on a few of the first run GStar Leopards to see just what it was all about. We’ll talk about the flight of the disc in a moment, but first want to focus on the plastic itself.

GStar plastic is certainly more flexible than normal Star plastic that you can find on store shelves today. The thing we noticed the most when we first got a hold of it is how flexible the flight plate was. If you’re one that likes to really dig their thumb into the top of the disc, the GStar plastic could appeal to you. Now, with that said, some will likely find GStar to be too flexible. Our tests were done in winter conditions with the temperature around 40 or 50 degrees. We’re curious to see how it feels when the weather warms up.

The grip actually seems pretty similar to normal Star plastic in the Leopards we were using. It is hard to say there was much of a difference at all.

When we actually put the GStar Leopard in the air, we were actually very impressed with the flight. Most disc golfers find the current Champion Leopards to be relatively stable. The GStar Leopards flew almost exactly like how we would want a Leopard to fly. A little understable with great glide and control that ends with just a little fade. Many times we hear people pick up a Leopard and not find it to fly like the flight numbers Innova provides (6, 5, -2, 1). The GStar Leopard could easily be rated at those exact flight numbers.

We would give it a little hyzer on release and it would flip up flat and hold a very straight flight until it fades out at the end. If you give it a flat release and a little height, expect a small turn followed by just enough fade to break it out of the turn. If you like how a beat-in Leopard flies, you will like this flight pattern.

Since the release of the Leopards, GStar has been used on Destroyers, Teebirds, and TLs for limited runs for tournament fundraisers. Based on a tweet from Innova designer Levi Wilcox, it looks like GStar is getting its own logo. We would expect to see GStar in full production sometime in 2014.