You are at:Home»Reviews»Midranges»Innova Foxbat Review

In late October, Innova Discs announced another new release for the 2013 season. The Innova Foxbat is a wide diameter midrange with an understable flight path and great glide. It is currently available as a fundraiser disc for the 2014 Gentleman’s Club Challenge through Disc Golf Values and we had to pick one up to see what all the hype is about.

Innova says this about the Foxbat:

In our initial tests with the Foxbat, we could quickly see how it could be useful for disc golfers of any skill level. When we tested it, disc golfers with an average to above average arm strength were able to hit some very straight lines with the Foxbat. With a little bit of a hyzer angle on release and a little snap, the Foxbat would flip up flat, turn to the right just a touch, and carry down the fairway with some outstanding glide. At the end of the flight the glide would hold the Foxbat up as much as possible and allow it to settle down to the ground without any movement left or right.

If you release it with a flat release and a decent amount of snap, the Foxbat would get up to speed quickly and get into a controllable turn towards the right. It wouldn’t flip and turn into a roller, but it would hold a very consistent turn for the entire flight. If you’re a right handed thrower who throws backhand, think of this flight path as a mirror image of a short sweeping hyzer shot.

If you are wanting to throw it on an anhyzer, you really don’t need to force it over that much. If you give it a good amount of snap, you will be able to let it perform it’s natural flight.

The Foxbat is really a finesse disc. If you need to get a slight turnover, a flat release is all you need. If you need a straight flight, give it a little hyzer at the start of the throw. It truly has no fade. It will just drop if thrown straight or hold any anhyzer line. Because of the lack of fade, it really doesn’t like any type of hyzer shot. It just isn’t that kind of disc.

Now, on approach shots, because of the understable flight, you will be able to throw very controllable shots with it. If a putter isn’t enough disc, you can really rely on the Foxbat’s glide to carry it down towards the basket. If you’ve ever found yourself on a wooded hole with a tight window to hit from about 150 feet away, the Foxbat will be able to hit it. 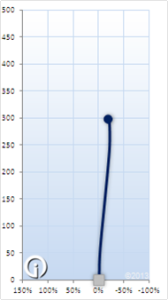 We should also note that the Foxbat does not like a headwind. It doesn’t have a lot of high speed stability and has next to nothing when it comes to low speed stability.

Innova gives the Foxbat ratings of 5, 6, -1, 0. After our tests, we’d rate the Foxbat at 4.5, 6, -1, 0. It doesn’t quite have the Speed 5 rating, but does have an outstanding amount of glide. It is very clear when you see it carry and just remain in the air as it carries. Innova hasn’t made something like this yet.

The flight path from inbounds Disc Golf shows the understable flight path that we were talking about. It will start to turn early and then hold that line for the entire flight. If you need something straight ahead, just give it some hyzer, let it flip up and glide.

If you’re looking for a straight flight path for short drives or approach shots, you’ll be hard pressed to find a better option on the market. You don’t need to force the Foxbat to do much. If you let the Foxbat do what it naturally wants to do, you’ll see great results.