You are at:Home»Reviews»Putters»Innova Discs Whale Review

You can argue that a lot of Innova’s success is due to their Aviar putter and all the different variations of it. Big bead, small bead, no bead, hard plastic, soft plastic, and anything in between. The latest putter to be inspired by the Aviar is the Innova Whale. Currently, the Whale can be found at your local Ice Bowl before it goes into full production.

A few years ago we looked at the history of the Ice Bowl and beyond the chance to get your hands on the Whale, participating in your local Ice Bowl is something we encourage everyone to do. It can be a very fun experience, but also a rewarding one with the opportunity to give back to your local community.

As for the Whale, Innova describes the Whale as a putter with a unique flight:

Available in XT plastic, the Whale is a beefy, Aviar-like Putter that has the stability of Innova’s Big-Bead Aviar Driver with nearly the same low-speed over stability as Innova’s Putt and Approach. It flies like a driver and lands like a putter. The Whale is easier to throw side-arm because of its superior torque resistance. Available weights: 150 to 175 grams.

Innova sent us a Whale in XT plastic to check out and we have to say that the flight was quite unique when throwing off the tee and on approach shots.

Just based on the description of the flight above, it might also remind you of the recently released Discmania P1x. The flights are similar, but the feel of the disc is different.

The Whale still has that low profile feel and a bead on the bottom, but the nose of the Whale is a very blunt nose compared to the P1x. The P1x has a very rounded nose that leads in to a very shallow shoulder. It really makes for a small feel. The Whale on the other hand with the blunt nose has a slightly higher shoulder and really fills out the hand. It feels like a bigger putter than it really is. Some in the testing group preferred the Whale due to this blunt nose.

Overall, we’d rate the Innova Whale at 2, 2.5, 0, 0.
When we saw the description of the Whale we were anxious to see how it flew as a driving putter. Three things stood out right away with the Whale was used on full power throws. The first was how stable it was at high speeds. It really did fly like a stable driver and showed no signs of turn. We could really put some power behind it and the Whale would fly as straight as can be. Even when we gave it a little anhyzer, it would flatten back out. It wasn’t the quickest to return to flat, but it did show that it had a lot of stability right out of your hand.

At the end of the flight, especially on drives, the Whale really showed little to no fade. It would continue to push forward and land. There might have been a slight movement to the left, but not enough to really call it fade. The Whale would still remain on a flat angle and just settle down as it lost power. Again, true to Innova’s statement, it finishes like a putter while still flying like a driver.

The third thing that stood out for us when using the Whale off the tee was the lack of glide. It wasn’t a brick, but it never wanted to gain those extra few feet by floating on down the fairway. It had enough glide to keep it in the air at first, but then really leaned on your own power to get it down to the basket. You can really give the Whale all you have and trust it won’t go out of control on you. When combined with the high speed stability, the Whale can take some power but still fly a very accurate line.

When used on approach shots, we actually saw a little bit of fade from the Whale. It wasn’t a lot, but it was more than what we saw on drives. When we took some power off of it the glide wouldn’t help keep it a loft so it had a little extra energy and needed to pull it left. It’s worth noting since on drives this fade wasn’t so apparent. You won’t get quite the same flight, but you still get a lot of the same control.

While we didn’t spend a lot of time trying to use the Whale on forehand shots, it can hold up due to how stable it is at high speeds. Flicking a putter can be a little tricky for some, but once you get the feel for it, the Whale can be a disc you can trust on a little flick.

Inside the circle the Whale was another putter that allows you to aim right at the heart of the chains. The low glide will bring a putt that doesn’t want to carry too far, but will drop into the chains nicely. Spin putters will be able to really commit to a strong put and throw with confidence. Push or pitch putters will need to figure out that feel for the glide, but will also be able to produce some confident putts with the Whale. 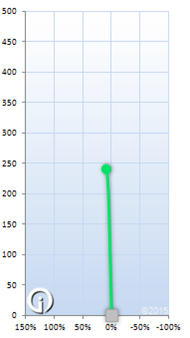 The flight chart from inbounds Disc Golf shows a very similar flight to what we saw. Very straight and stable to begin with before about as straight of a fade as you can find.

The Innova Whale is another nice variation on the Aviar. The blunt nose of the Whale makes it feel bigger than it really is. In reality, the Whale isn’t a very big putter, but just the mental aspect of your game will help provide a lot of confidence when throwing the Whale.

Especially off the tee, the Whale will be nice and stable when thrown at full power. You can really use it as a point and shoot disc. With the small amount of glide, the Whale will finish with a very forward fade and not a lot of movement from left to right. You might see a little fade on approach shots, but it will still be minimal.

The Innova Whale is now out in stores in both DX and XT plastics! Innova sent over a pair in each plastic for our readers. We’ll give away one of each on Facebook and Twitter. There are two easy ways to enter.

The @InnovaDiscs Whale is officially in stores and @ATDiscGolf has four to give away! Learn more: http://is.gd/ATDG_Whale #discgolf

Entries will be taken though Monday 4/13 at 11:59 p.m. Central Time. Winners will be announced Tuesday 4/14 on our Facebook page.