You are at:Home»Reviews»Drivers»Innova Daedalus Review

It is often said that many high speed distance drivers require a strong arm to throw them. You need to put enough power behind it to get it up to speed so you can carry out a full flight. Getting a high speed disc to turn will help ensure maximum distance since it will cover more ground and not act very overstable and fade out early.

The Innova Daedalus is one high speed distance driver that almost caters directly do a group with a slower arm speed. Yes, power throwers can also get some results from it, but it might be too understable.

Innova says this about their high speed, understable driver:

While it was previously released in GStar, the Daedalus is now available in Champion plastic. Innova sent us the Champion Daedalus for this review.

Just like any other Speed 13 drivers, you’ll get a very wide rim and a very low profile. There isn’t a lot of room under the flight plate, but enough to give it a strong power grip with distance on your mind.

One might look at Innova’s flight numbers for the Daedalus (13, 5, -3, 2) and think of it’s cousin, the Katana. The Dynamic Discs Freedom might also come to mind. In our tests we feel the Daedalus has more high speed turn and less fade than both the Katana and Freedom.

The wide rim shouldn’t scare people away from the Daedalus. For those in our testing group who tend to reach distances at only 300-325 feet really saw some decent turn out of the Daedalus. Certainly more than other high speed drivers. It didn’t take much power to really get a nice flight out of it.

For the average arm, the Daedalus will show that high speed turn pretty early in the flight and will hold that angle for quite a while. You really don’t need to turn over on it to get it to show any turn. It will do it on its own with ease. You need to make sure it does have some room to fly though and carry out a flight. If you put even less power on it, you’ll see a pretty straight flight from the Daedalus before a moderate fade.

Stronger arms will be able to get the Daedalus to drop into a roller with ease. Power arms were surprised with how easy it was to really put some power behind the Daedalus and watch it quickly turn and hit the ground at a steep angle before flipping up and rolling on down the fairway. We saw some very long rollers with it on the course.

The end of the Daedalus’ flight is really dependent on the amount of power you gave it. Does it have fade? Yes, but the results will really vary based on the amount of initial power you gave it. For those with the average arm speed we mentioned earlier, it will show enough fade to break back out of the turn, but not much more than that. If you throw it soft enough to get a pretty straight flight it will show a small finish to the left, but nothing to produce a big skip or flare.

We were surprised at the distances we could achieve with the Daedalus when thrown at about 75-80% of our max power. It just needs enough power to get up to speed and the disc will do the rest of the work. There is a decent amount of glide to keep it in the air which is needed for a disc like this. Without that glide it wouldn’t be able to hold up that turn long enough for it to fade back out. 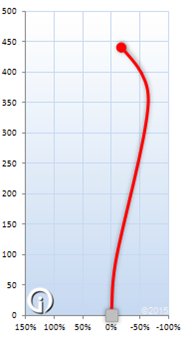 Overall, we’d rate the Innova Daedalus at 13, 5, -3.5, 2. It certainly has more turn than fade and thanks to some glide, it can hit some nice distances for people who might not be able to reach those lengths before.

The flight chart from inbounds Disc Golf shows a flight path close to what we were seeing. The turn is there early and will carry for most of the flight before a small finish at the end. It won’t be very powerful, but it will show up.

We know how tempting it is to pick up a brand new high speed driver when you’re first getting started with disc golf. We also know how frustrating it can be when the results just don’t go your way and those high speed discs fade out too early on you. The Innova Daedalus could be the most beginner friendly distance driver. There are some discs that have more turn, but they also come with less fade. Average arms were able to get a very predictable flight out of the Daedalus that stronger arms can likely achieve with a more stable disc. It can be a great learning tool to see how a disc should fly and once you build up that arm speed, you can graduate to other drivers that can handle the added power.

While certainly useful for beginners, it can really kick out some long rollers for power players. A strong flat throw will roll quickly and hit the ground with a lot of power. Try and harness this power and find the right mix for you and the Daedalus will provide the results.

Win your own Innova Daedalus

Innova also sent us a few extra to give away to our readers! We’ll accept entries until Noon central time on Sunday, April 26. We’ll announce winners Sunday afternoon with hopes of getting the discs out in the mail on Monday. There are two easy ways to enter:

It doesn’t take much to make the @InnovaDiscs Daedalus! Win one from @ATDiscGolf this weekend! Learn more: http://is.gd/ATDG_Daedalus #discgolf

Thanks to Innova for the giveaways! Good luck!