You are at:Home»Reviews»Midranges»Innova Commander Review

In the later stages of 2015 Innova Discs had a new midrange approved by the PDGA. The Innova Commander is the latest that jumps into their crowded midrange lineup.

Innova says this about the Commander:

The Commander is a large diameter midrange disc with a max weight of 180 grams. It is a stable flyer with a slow fade throughout the flight. The Commander is designed for power players and windy play. Preliminary flight rating is 5, 4, 0, 3.

We’ve taken the Innova Commander out to the course with a few other testers of various skill levels to see how the Commander stacked up against other popular midranges.

The feel of the Commander is a little different, but offers a nice alternative feel when compared to other stable-to-overstable midranges. The nose itself is pretty shallow, but it has a decent shoulder that builds some dome before a flat top at the peak. In the end, it fills your hand nicely, but also provides a different feel than the Roc3, for example. While the Roc3, or any variation of the Roc, is quite popular, some don’t like the overall feel it brings. If you’ve been looking for a beaded midrange that flies in a similar manner to a Roc, but feels different, this could be an option.

After all of our tests, three factors in the flight of the Commander jumped out. First, let’s start with the speed. It is on the faster side of the midrange spectrum and likes the added power you can put behind it. Yes, you still have a lot of control, but it will be a touch faster.

Now, while it is a little faster, we also noticed a slight lack of glide. Even with a slightly domey top, it surprised us a little bit with the lack of glide. It seemed to lean more on speed than glide to carry down the fairway. This was also apparent at the end of the flight when a moderate-to-strong fade would kick in, but it wouldn’t carry too far to the left just due to the the glide. Instead of hanging in the air and kicking left, it would start to drop as it lost power. There was still movement to the left, but nothing too dramatic.

Finally, the high speed stability shined on this disc. Give. It. Power. We could really lean into the Commander with confidence. With a flat release and a lot of power behind it, the Commander flies flat and straight without wanting to show any movement to the right.

With the combination of speed, lack of glide, and high speed stability, you have a midrange that power throwers should love. Those with a 350-400 foot max distance should be able to grab the Commander and throw it with a strong effort and have the confidence to know it won’t glide out too far on you and you’ll also have quite a bit of control over the final placement.

Since it won’t turn on you and the lack of glide helps it drop out at the end of the flight, you can really do quite a bit with it. You could even produce some relatively straight shots from start to finish with just a hint of anhyzer off the tee or you can power down your throw and see similar results.

If thrown with a little anhyzer, it will slowly flex out of it before a very small fade. Regardless of the amount of anhyzer you use, remember it will really lean on the power you put behind it and not the glide.

As for drives with a little less power, or even approach shots for that matter, the Commander became a nice placement midrange. On some midranges you’ll take some power off of it and see the glide take over and carry forward. With the Commander, we took a little power off of it, saw plenty of high speed stability and a flight, that in a sense, had very little fade. Since it didn’t hang in the air long enough to really kick hard left, it would drop pretty quickly and hit the ground faster than expected. This was very useful on approach shots where a putter wasn’t enough, and we needed something with a little stability and added speed. Trust the Commander a bit and you can let it nest right up near the pin.

Overall, we’d rate the Innova Commander at 5, 3, 0, 3. This is slightly different than Innova’s initial numbers which bump the glide rating to a 4. 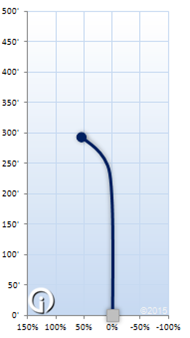 The flight chart from inbounds Disc Golf shows a flight close to what we were seeing. The fade will be there if you give it some height, but don’t count on much on a typical throw. It won’t carry too much with the lack of glide, but the high speed stability will certainly be there.

If you’ve been looking for another stable-to-overstable midrange that offers higher control than normal due to a little less glide, the Innova Commander could be worth a look. With a different feel than the Roc and a shallow profile before leading into a moderate dome the Commander brings an alternative option to many who don’t like the Roc, or any beaded midrange for that matter.

While it was initially released as a fundraiser for the Nick Hyde Memorial tournament you still have a chance to pick up a Star Commander while they are still available in limited quantities.

Win your own Innova Commander

We have an extra Innova Commander and we’ll throw in the disc we used in our reviews for our latest giveaway! We’ll take entries through Sunday, February 7 at 11:59 p.m. There are three ways to enter:

The @InnovaDiscs Commander looks to take control of your bag and you can win one from @ATDiscGolf http://is.gd/ATDG_Commander #DiscGolf