You are at:Home»Reviews»Other»inFlight Guide brings disc golf flight charts to the masses 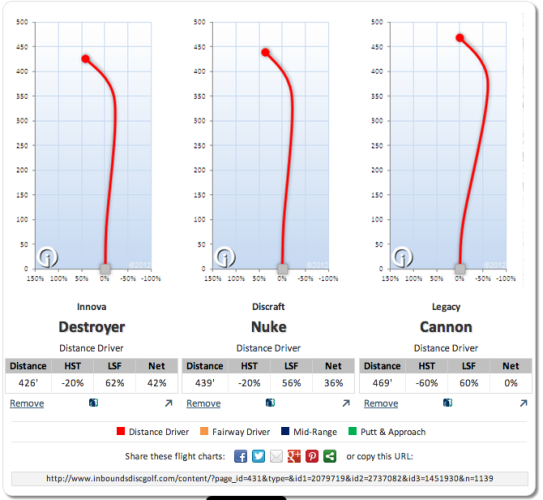 Earlier this week the folks at inbounds Disc Golf released the inFlight Guide. Disc golfers around the world are wanting to know how a disc will fly when they throw it. Innova has their rating system, Discraft has theirs, and others try and combine them into something all new. There is not a universal system out there to grade a disc on.

I was able to talk with Brian Rogers from inbounds Disc Golf late last week and get a preview of the inFlight Guide. When using the guide you’ll see four numbers:

High-Speed Turn (HST) – High-Speed Turn occurs during the first part of flight and is the amount to which a disc will turn to the right. The lower the % (especially negative percentages), the greater the likelihood the disc will bank right (and/or turn over).

Low-Speed Fade (LSF) – As the disc begins to slow down toward the end of its flight, the Low-Speed Fade is the amount to which a disc will bank left. The higher the %, the greater the disc will hook left.

Net Stability – Net Stability takes into account the total effect of both High-Speed Turn and Low-Speed Fade to provide the relative stability of a disc and helps to demonstrate the probable left-to-right position of the disc at the end of its flight. The discs with the highest % will be the most overstable and the discs with the lowest % will be the most understable, with varying levels of overstable, stable, and understable in between.

Distance – Expected average distance achievable for a given disc, assuming the disc is thrown at the appropriate power level and speed.

At first, I was confused by the HST numbers. I figured they would be the opposite. Brian explained it this way:

The % values don’t actually indicate the % chance that the disc will turn over, but given a horizontal plane, what % of the x-axis will be traversed during the initial phase of flight. Given that there are discs with flight ratings that indicate that they have no right turn and, in fact, may have some degree of left turn during the high-speed portion of the flight, both positive and negative values need to be used.

I should also point out, if you cannot throw 400 feet, take the distance rating with a grain of salt. This is also a big reason why I try not to give too many details on how FAR I can throw a disc in a review. Everyone is at a different level. Just because the Innova Blizzard Champion Boss owns the world distance record does not mean you can throw it that far. That throw included some crazy wind that allowed it to carry.

Just because someone can throw a putter 300 feet does not mean that if you pick up the same exact disc it will also go 300 feet. inbounds Disc Golf talks about how they came up with all these ratings on their Overview page. Also, take a read on how they determined distance.

I think that something like the inFlight Guide has a lot of potential. It is nice to view three similar discs all side by side.

There are a few things that I’d like to see added including the option to overlay the graphs on top of each other. Side by side is great but being able to see three paths at one time could help golfers figure out which one they want.

I also believe that disc golf is played in zero wind and on flat ground about 1% of the time. Throwing a Firebird into a headwind will not show the path shown on the guide. It will be straighter. A lot of beginning disc golfers do not understand what an overstable disc does in the wind or what an understable disc does in the wind. I wish you could add some real world factors.

All in all, I wish the team at inbounds Disc Golf well with this new tool. I know I’ll be going back to it when I’m trying to compare a few discs and see which one might work better for me. I encourage you to check it out and see how it can help you.