You are at:Home»Reviews»Midranges»HyzerBomb Mortar Review

HyzerBomb Discs has been around since 2011 and spent the 2013 season pushing many new products. One of those new products was the HyzerBomb Mortar midrange. The Mortar is a beadless, overstable midrange that can really hold up in a headwind. After Hyzerbomb sent us a Mortar in the Frontline-X plastic for this review.

HyzerBomb says this about the Mortar:

High power throwers will love this midrange. It’s flat top profile makes it so reliable and predictable even in extreme wind conditions. This premium plastic with extra give feels great in the hand and allows for more control. Throw into a headwind and watch it hold the line and not turnover. 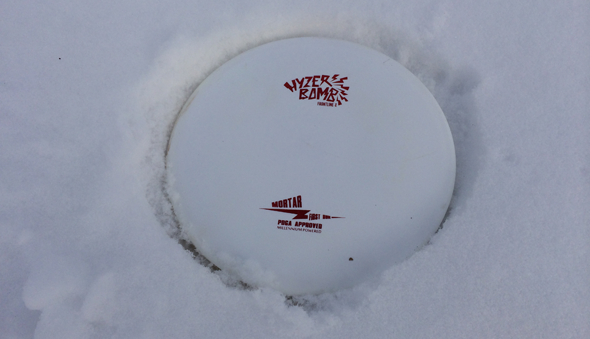 Read the Recon Mortar Review
The Frontline-X plastic is a very flexible blend of a Star like plastic. It is quite flexible, but never felt too flexible. We could really dig into it and know that we weren’t going to have it slip out of our hands. From drives to approach shots, we always felt that the plastic was performing nicely. While we haven’t had a lot of time with it, the Frontline-X plastic seems to beat in pretty slowly and holds the initial flight characteristics even after some tree hits.

The Mortar’s flight is very stable at both high speeds and low speeds. When the Mortar first comes out of your hand, it will certainly hold the angle you put it on. If you need a big sweeping hyzer approach shot, the Mortar will hold that line and fly on a very predictable arc. If you need it to hit a line straight ahead, you can go right at it and trust it won’t turn on you. One of our favorite throws with the Mortar was with a quick, tight anhyzer on initial release and have it flex quickly back to a flat angle before fading left. A very controllable shot on each throw. 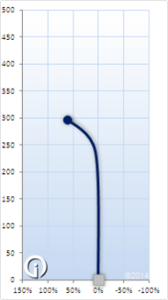 When facing a headwind the Mortar will certainly play nice. We threw the Mortar into some relatively strong headwinds and it held up perfectly every throw. This is a disc you can trust.

The fade of the Mortar was also quite predicable. This is the type of disc you want to fade. The fade was perfect for those shots where you need it to hold a line and then dive in towards the basket. It was strong enough to create a decent skip when kept low, but not to the point where you’re afraid of having it skip out of control.

While the Mortar does have some speed, it certainly doesn’t have a lot of glide. That leads to a lot of control and trust in the flight. If you need distance from a midrange, this isn’t your disc, but if you need control, it is worth a shot.

Overall, we’d rate the Mortar at 5, 2, 0, 3. Those happen to be the same ratings HyzerBomb also gives the Mortar. The flight chart from inbounds Disc Golf shows the very stable flight path at high speeds that concludes with the expected fade.

When we first picked up the Mortar the feeling certainly felt familiar. After looking at it some more, and talking with HyzerBomb, the Mortar is based off of Innova’s beadless Gator mold. If you’re a fan of the old run of Star Gators without the bead, you could easily fall in love with the Mortar. Even if you’ve never thrown the beadless Gator, the Mortar could find a spot in your bag.

Updated on September 11, 2015 – HyzerBomb recently produced a run of the Mortar in their Recon plastic and we were able to pick up a few from HyzerBomb’s Matt Siri at the recent Ledgestone Insurance Open. These are also a signature model for 2012 collegiate champion Jared Roan.

The Recon Mortar has same great feel in the hand with a full nose that just feels beefy. The flat top gives it a smoother feel than you’d expect. Putting this in a simple fan grip or any type of control grip is very easy to do. You’ll feel right at home.

While the Recon Mortar was still just as stable at both high and low speeds, this run had a little more glide to it, which adds a unique element to the disc. We were able to get a little added distance which isn’t something we expected.

We pulled out the Mortar on a few holes where we tried a few different shots and always and a little more legs than we thought. First, we gave it just a solid power throw with a flat release and it had just enough glide to carry it out an extra 30-50 feet. We weren’t getting distances of other midranges like a Roc3, but the disc isn’t designed to do that. The added distance was certainly welcome.

We also had a few throws where we gave it that tight anhyzer release and it held that angle a little longer and flexed out a little slower. It still returned left, but it had a little extra float to it which was nice. This helped with the accuracy and you could really control it on some tight lines.

Overall, we’d stick with most of the flight ratings as we previously stated, but bump them to 5, 2.5, 0, 3. In short, you could compare this to an Innova Gator with a little more glide and a touch less fade.