You are at:Home»Instruction»The ‘Ground-Up’ Approach to Saving Strokes: Part 2

The disc golf courses where I live have plenty of variety, but one thing they don’t have, for the most part, is the kind of thick, lush grass found in manicured city or county parks. Whenever I travel to those kinds of courses, therefore, I need to make an adjustment.

I’m used to fairways and greens that present all manner of complexities when the disc comes into contact with them, due to the surface itself as much as the mountainous slopes. The hard and sometimes barren ground results in all kinds of action after the disc makes first contact. The uneven nature of the terrain – due to rocks, ruts, and exposed roots (an especially notorious villain in Santa Cruz) – add a second layer of complexity to the already technical nature of these seemingly unpredictable shots. So when I find myself on a course in a bucolic park setting, with lush green lawn fairways that are beefed up Scott’s TurfBuilder and mowed to a shag carpet-like regularity, it takes some time for me to adjust. 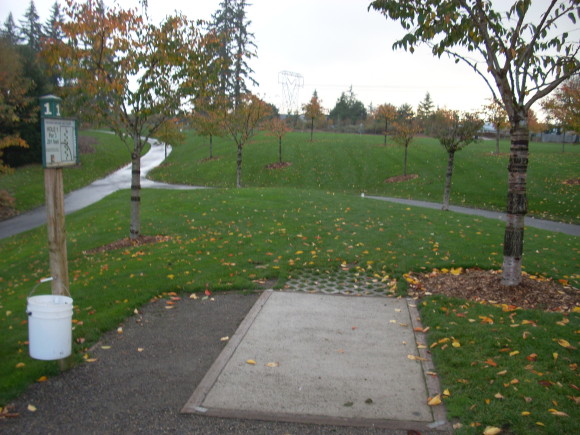 Courses in manicured, grassy parks – like this one in Hillsboro, Oregon – can be played more aggressively because the disc is less likely to skip or roll far from where it lands. (Photo by Jack Trageser)

Certain things are just hard-coded into your game if you play a particular type of course nearly all the time, and dealing with tricky fairways and greens is part of my DNA. After watching the locals time and again attack the greens with reckless abandon, and then constantly coming up 30 feet shorter than I intended myself because my discs are plunging into the soft, thick grass like M & M’s in chocolate pudding, I’ll begin to realize some adaptation is necessary. And even then, the old cautious habit is hard to break.

I’m glad that the adjustment I have to make when in those situations is from more to less difficult, but it’s an adjustment nonetheless. It reminds me of the pool table my Grandpa built from scratch long before I was born. He wanted his sons to be good at billiards, so he built the table regulation size but with snooker-size pockets, which are much smaller than the pockets on a normal pool table. It made those who practiced on it more precise with their aim, but it also required an adjustment to the increased shot-making possibilities when playing on normal tables. In both cases, the key is to be aware of the changes in the environment – and then know how to adjust one’s game accordingly. For my dad and his brothers (especially Uncle Bob the eventual pool shark) the adjustment was much like it is for me in disc golf.

Being used to technical courses like DeLaveaga and then adapting to the grassy fairways common in, say, the Michigan Metropark system (like Hudson Mills) requires a conscious effort to be more aggressive. The disc isn’t going to go nearly as far once it hits the ground, and is much less likely to hop, skip and roll its way to an extra stroke or two.

A scenario I’ve played out numerous times is to hook up with some locals at one of these types of courses, and an hour or so into the round I feel like I’m executing my typical game plan pretty well. Staying on the fairways, not missing gimme putts, not taking unnecessary strokes . . . but then I realize I’m already either several strokes behind someone of my own skill level or at the same score as a player obviously not as experienced or polished as me. I think back, and realize the difference has been them attacking the holes compared to me playing with caution. And the funny thing is even after I realize the change required to make the most of an opportunity to go for it hole after hole, my ingrained habits of ‘playing smart’ die hard. That’s what continually practicing in one set of conditions will do.

But as hard as it is to just flip a switch and suddenly start playing more aggressive on flat holes with lush turf, it is infinitely more difficult to adjust from that type of environment to terrain that is hard, barren, rocky, craggy, or rutted. In fact, anything that is uneven means potentially unpredictable results until the disc comes to a complete stop. So how do you adjust your technique and approach when the terrain is more likely to make the disc dance like a water droplet on a hot skillet? You can start with recognizing that careful consideration of the latter will lead to a specific, measure alteration of the former. 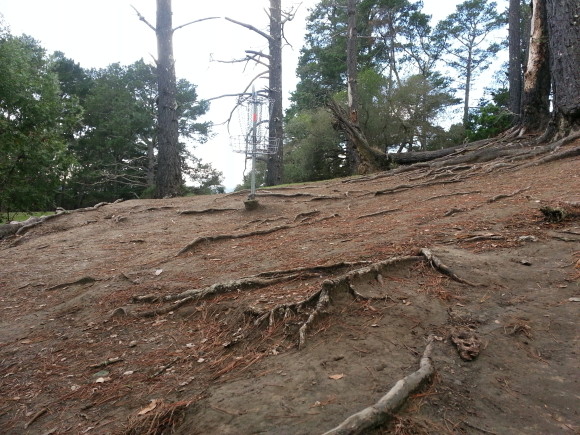 The green on Hole 1 at DeLaveaga, with hard soil and exposed roots, offers plenty of chances for the disc to catch an edge and roll away. (Photo by Jack Trageser)

For those that enjoy the challenge that golf presents in terms of shooting the lowest possible score over the course of a round, nothing is more important than the concept of risk vs. reward. In short, risk/reward involves weighing the risk of bad things happening on a given contemplated shot versus the probability of reward if things go as planned. The most common example might be along these lines: “If I go for this long putt and make it, I’ll get a birdie. If I miss and the disc ends up far enough from the basket that I miss the comeback putt, I’ll get a bogey. If I play it safe and lay up, my chances for par are almost 100 percent.”

The basics of that story are familiar to all of us who play either kind of golf – stick, or disc – but the decision is in the details. How long is the putt? Is it flat, or on a slope? Is there any OB nearby? How about trees or other tall or thick foliage? And, most germane to this post, what is the ground like? Simply put, when it comes to the general risk/reward equations that thinking players apply to every shot decision – consciously or unconsciously – hard, uneven surfaces increase the risk. Always. 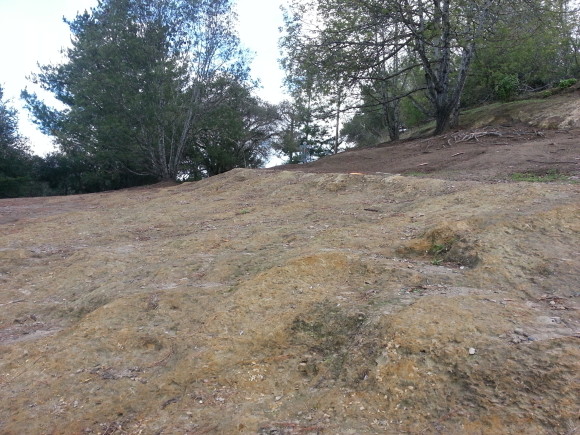 The first two holes at DeLaveaga set the tone for what’s to follow. On this green, a side-slope is added to the technical terrain, requiring players to execute with perfection. (Photo by Jack Trageser)

Uneven means unpredictable, and unpredictable means (at least to a degree) uncontrollable. So generally speaking, the smart play on these types of surfaces is to get more conservative with your decision making. And if the terrain is sloped as well as hard and rutted, the potential for rolling away is further compounded. Adjust accordingly.

As always, there is an exception to the rule. Sometimes you find yourself in a spot where the combination of slope and terrain is so treacherous that the odds aren’t much different whether you lay up or go for it. When I identify a situation like that I’ll often go for it, because nothing feels worse than making what you think is the safe, smart play, only to take the extra stroke(s) anyway.

There are a few specific techniques to learn and practice that are essential if you want to master hard and lumpy-bumpy terrain. First of all, hard and barren means the disc will have more life after it makes first contact with the ground. Shots that come in at an angle relatively flat to the ground are likely to skip or slide. So when you plan your shot, plan ahead for that extra distance. And keep in mind that the angle at which the disc hits the ground will determine how far and in which direction if will skip or slide.

For drives and longer upshots, if it’s already curving right-to-left, it’ll keep on in that direction after hitting the ground. If the shot is pretty straight and hits the ground with little angle it will probably slide more than skip, and progress mostly straight ahead.

Shots thrown high with lots of hyzer will come down at an angle that is so perpendicular to the ground that they usually stay close to where they land. These are called ‘spike hyzers’ due to the way they fall to the earth- kinda like Lawn Darts. And here is something useful to keep in mind: If you turn the disc over a little on a pretty flat shot, the spin of the disc will act as backspin and arrest it’s progress somewhat. But if you turn it over too much and it lands on an edge on a hard surface, it’ll likely roll. And rollers when you don’t want ’em almost always spell trouble!

For upshots that are less than 100 feet, there is a specific shot that works the best when there is either a great chance of catching an edge and rolling or a steep downhill slope with hard, barren ground. It’s called the ‘pancake’ shot, and the idea is for the disc to land flat and upside down. 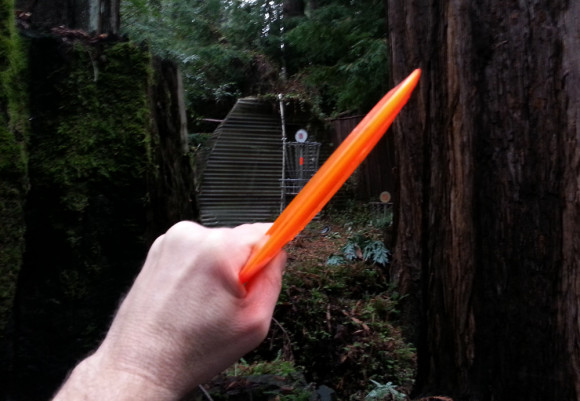 Pancake shots (NOTE: this one is held left-handed) are released with an angle and touch that result in the disc landing upside-down and sliding- rather than catching an edge and rolling. )Photo by Jack Trageser)

This shot is executed using a grip with the forefinger and middle finger on the underside of the disc, with the middle finger pressed against the rime, and the thumb holding it firm on the other side, on the top of the disc. The technique is much like an overhand drive, but the power is obviously adjusted for particular shot at hand. More importantly, the disc needs to be released at an angle that will result in it landing perfectly or almost perfectly upside down. If the shot is very short it’ll have less time to flip in the air so the release angle should be almost upside down out of the hand. If it’s longer shot the release angle can be closer to straight up-and-down. The amount of spin will affect the flip too, so experiment and see what gets the results you need. 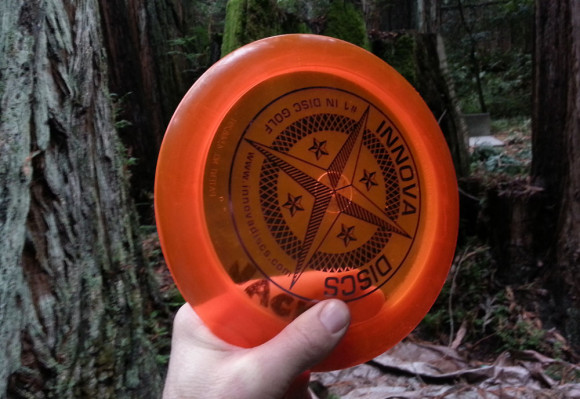 The grip for the pancake shot is pretty much the same as that used for a typical forehand throw. This is the author’s lefty pancake grip. (Photo by Jack Trageser)

Finally, when using this shot on a steep, hard downhill lie, keep in mind that a disc will slide much more when upside down without the rim to cause friction with the ground. Often times I’ll throw the disc only 10 feet on a shot I need to go 50 or 60 feet, counting on the slide to do most of the work.

Adapting your game to the current environment is an important part of disc golf- especially because you know the course won’t adapt to your game! Have fun out there, and remember to stay grounded!